A park built on a fault line in East Village 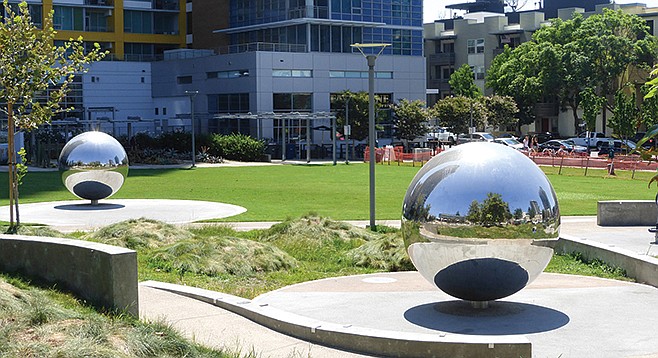 On Island Avenue between 14th and 15th streets., East Village

Fault Line Park, the first public park in East Village, is adjacent to two high-rise apartment complexes on its east side. It is a public park because no structures for human occupancy can be built on it; beneath the surface is a Holocene active fault that was determined to have surface displacement within the last 11,700 years. The fault line is a strand of the Rose Canyon Fault system. The walkway that crosses the park from J Street to Island Avenue artistically depicts the general line of the fault, which actually curves southwest of the walkway, crossing 14th Street and J Street and angling toward 13th Street. A visit to this park reveals how the geology of the area has affected construction in the immediate area.

One of the special features of this small 1.3-acre park is the “Fault Whisper,” two large 7-foot mirror-finished stainless steel spheres located on each side of the walkway that monitor the Rose Canyon Fault system. The west sphere has a viewfinder focused on the center of the east sphere. It acts as a living lens that reveals movement along the fault. Any future fault movement will create an offset along the sightline and will be noticeable to viewers. Installed in 2015, “Fault Whisper” was created by artist Po Shu Wang and his wife Louise Bertelsen for the San Diego Commission for Arts and Culture. The work received a national award from Americans for the Arts.

The “Fault Whisper” also has a sound element. An accelerometer was installed in the fault to monitor movement and the sounds associated with it. The sounds are 16 octaves below Middle C and are inaudible to the human ear, so Wang worked with a sound studio to convert these inaudible sounds into musical notes that are broadcast from the west sphere. Go to this City of San Diego website to hear the sounds remotely: www.sandiego.gov/arts-culture/publicart/civicart/faultwhisper.

Fault Line Park has a playground for children, a dog area, a large grassy area, and looped walkways in addition to Amplified Ale Works Kitchen and Beer Garden, located on the northwest corner with a patio view of the park. The park occupies the west half of this city block and was built by Pinnacle International Development, Inc., as a result of a deal allowing them to build the high-rises. The developer is responsible for maintaining the park and the restrooms.

After exploring the park and its walkways, look to the building located on the southeast corner of 14th and J Street signed “Enlightened.” This building is grandfathered and if torn down, no replacement can be built as the fault runs beneath the building. Walk west on the south side of J Street to the southeast corner of 13th and J Street. Note that there is no building on this corner as the fault is just below. Where an active fault runs, and where there is no building, you will find open space because the City can not permit building structures for human occupancy on an active fault, instead requiring a setback from the active fault. By noting these open spaces, you can trace the actual active fault line on this city block. You will also find an open space across Island Avenue, just north of the walkway, where there is a garden over the fault line.

Discover how faults can determine city land use. 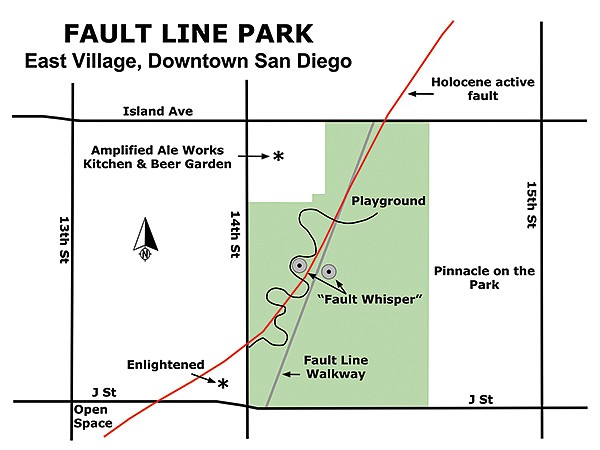 Driving directions: (From north of downtown) Take CA-163 S to downtown, to where it becomes 10th Avenue. Continue south on 10th Avenue to Island Avenue and turn left (east). Fault Line Park is located between Island and J Street on the east side of 14th Street. (From south of downtown) Take I-5N and exit on 19th Street. Turn left (west) on J Street and drive to 14th Street. Actual address of the park is 1433 Island Avenue, San Diego 92101. Finding metered street parking in this downtown area can be challenging. Consider parking further out and taking a trolley downtown and walking to this park, or visit on Sundays or holidays when the parking meters are free. Hiking length: 0.5 mile. Allow 20 minutes to walk the park and area. Difficulty: Easy. No elevation gain/loss. Dogs on leashes allowed. Facilities. Best to visit the park between late morning and late afternoon. During evening hours and until morning, there may be some homeless folks camping for the night, but they leave in the morning.