“Nobody thought this was the right choice” 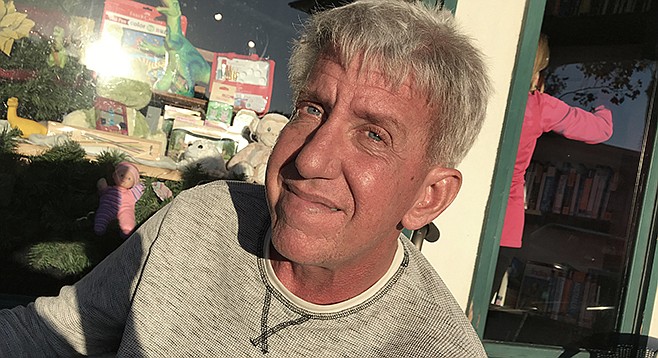 Michael Schmid has decided to end his life.

I first met Michael at the Café Madrid in Coronado. First thing you notice are his electric-blue eyes. The next is his soft voice, which makes you listen, because a lot of what he says is packed with humor.

Also, his voice wavers because he is suffering from PLS (Primary Lateral Sclerosis). There’s no way out of it. 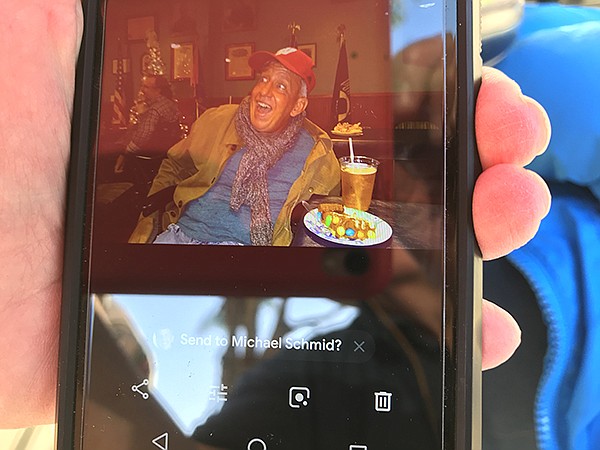 Michael Schmid caught on phone at one of the many parties friends and neighbors threw for him.

This is his story, as he told it to me over coffees in the afternoon sun.

“I was born in Verona, Wisconsin. One day, my foot started to drag. Then the other. Soon, I had to use a cane, then two canes. It’s been getting worse over 30 years.

“Two years ago, a doctor had suggested to me the ‘death with dignity’ option. I was no way ready for that. I couldn’t believe him. But two months ago, I changed my mind. I had fallen in the toilets. I was stuck there for hours, powerless. Finally, paramedics came, and I thought: ‘Something has to change.’”

“I told my ex-wife first. You have to see a doctor twice, a month apart, to request the prescription. They need to confirm that you are of sound mind, and that you are not being influenced [by other people who may have their own agenda].

“When I got his permission to access the medicines and end my life, I came away with a feeling of positive relief, a light-heartedness I hadn’t felt in a long time. Yes, a tiny fear, but less than I thought it would be. I had taken control. I set the day, December 27th, so we could get through Christmas.”

His parents showed up to help, “because I am now separated, and recently, the pain has been spreading everywhere.”

Do doubts plague him? “It’s only when I see, say, a commercial for a movie scheduled for December 30th. It’s hard to realize, I won’t be here.

“On the other hand, I firmly believe I’ll be with people I loved once. I believe in God, and Jesus. My Christianity is tempered with New Age ideas of reincarnation. I’m not sure what’s going to happen, except, no pain! I know the spirit will be free to prepare for my new journey.”

“I have had an extraordinarily blessed life. I feel so bad for my parents. They shouldn’t have to lose a child.”

But just in case you think he doesn’t see a funny side to this, recently he launched his own career as a stand-up (okay, sit-down) comic. With the help of the comedienne Lisa Alvarado and her comedy writer friends, he actually achieved a lifelong ambition: November 23rd, he performed a 15-minute act to a live audience at the Comedy Palace in Kearny Mesa. Alvarado’s now seeking Kickstart-funding to complete a documentary on it and him.

But the drumbeat continues. And now, it’s December 27th. Nothing can disguise this moment.

And yes, some have begged him to reconsider.

“Nobody thought this was the right choice,” he said.

One thing Michael Schmid is sure of: a ton of friends, waiting on the other side.

Correction: I misquoted Michael when he said:

“Nobody thought this was the right choice"

His voice was frail and difficult to understand. I think what he actually said was:

“But this was the right choice."

I apologize for any pain this may have caused.