Once owned by the Pannikin's Bob Sinclair 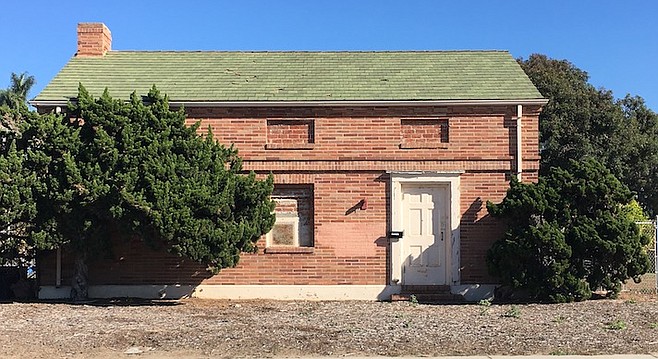 Every few years, on an Encinitas Facebook page, someone will ask what’s up with the abandoned-looking home, which sits outside of Cardiff Elementary School’s northwest corner. The two-story brick house has been there since the 1940s.

“Its one of Cardiff’s greatest mysteries,” posted Danny Joslin. The current round of speculation received over 50 comments.

When Adam Pachacki was in grade school, he thought, “It's a haunted house to keep the kids close during recess.” Sara Garcia believed it was the old, original Cardiff schoolhouse.

Debbie Montes posted, “Every time we drove past there, we would ask my dad, ‘What's in there?’” Tiring of the constant questioning, her dad starting taking other roads around town to avoid the mysterious building.

Christopher Parker thought it might be the old Cardiff jailhouse. Christine Peter thought it was Cardiff power station from the 1970s.

Numerous posts thought it was built as some kind of secret look-out or radar facility to guard against a West Coast attack by the Japanese in World War II. (Spotter bunkers and huts were established up and down the coastline after Pearl Harbor, but none so audacious as a two-story building.)

Only a few posted the house’s real story . . . most of it anyway.

Built by Bell Telephone during World War II, the building served as a telephone relay station, connecting services throughout Southern California. More importantly it held the large, low voltage batteries that amplified every phone’s handset and powered the phone’s ring.

And yes, it was designed as house-looking structure to avoid a possible air attack by the Japanese, which would have knocked out communications.

In the 1990s, Bob Sinclair, owner of Pannikin Coffee and Tea, noted for repurposing old buildings for his growing coffee shop chain, bought the Cardiff Bell Telephone house, which has been gutted and had its windows sealed over with bricks.

The building was deemed non-earthquake proof, and would require massive retrofits to open a coffee house. That and it probably wouldn’t have had enough off-street parking. At the time, community leaders felt Sinclair bought the building to keep it from being demolished, as he did with the original Encinitas train station, which he moved to Leucadia and refurbished into another Pannikin.

In 2001, the school district purchased the property from Sinclair, and it is now used for storage of the school’s carnival supplies and equipment. The land surrounding the building is a student-farmed garden.

Two more Bell Telephone houses, were built identical to the Cardiff house in size and architecture. One is in the San Onofre State Beach campground. It’s visible when driving southbound I-5, just west of the California Highway Patrol weigh station. The other is located at the west end of Ortega Highway 74, in San Juan Capistrano.

The San Onofre house is still in use. “We see AT&T trucks in there all the time,” said Shelly, a state park volunteer for the Orange Coast district. AT&T reaches the house through the campground.

Steve Stuart’s dad, a longtime San Onofre lifeguard, used to work for the phone company. He’s probably the best resource on the history of the Bell Telephone houses. He said the housing of the batteries were probably the most important purpose of the houses.

There may still be more Bell Telephone houses throughout Southern California. “You’d have to follow the railroad tracks to find them. Remember we didn’t have freeways and all the roads we have now. They would have been built next to the tracks,” said Stuart.

Historical Footnote: Phones provided by cable companies, or any portable phone powered by electricity, even cell phones, will not work in a power blackout, as evidenced by the big San Diego to western Arizona blackout of 2011. Only AT&T installed landlines, powered by the same network that used the old Bell batteries, will continue to operate without household power

And yes, an old rotary dial phone will still work on an AT&T landline, powered by the same network originally used in the mystery houses’ batteries.