He only chases free-range, grass-fed mice 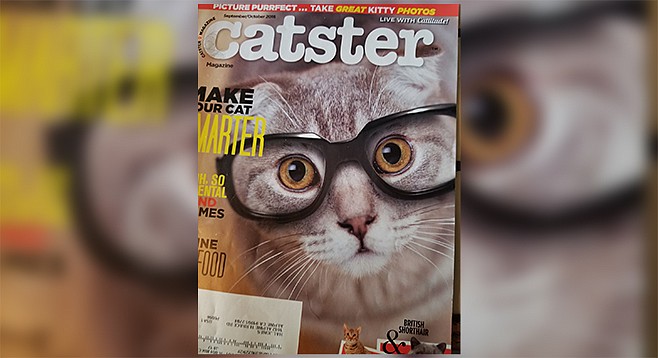 Check out this picture I found of “Catster.” I guess that’s like a “Hip-Cat!” So, if this were in the Reader, I guess it would be like asking the question, “If there are Hipsters, are there Hipster Cats otherwise known as “Catsters?”

Wow. Thank you for this. I can’t even.

I honestly don’t know if Catster magazine (formerly known as Cat Fancy) means to dress cats as little hipsters, or if they accidentally put a hipster cat on the cover of their magazine. I almost don’t care if it’s happy serendipity or purposeful availment of hipster stereotypes. It’s a freaking catster on the cover of Catster... a meta-catster! I bet that cat sits around the house all day not chasing balls of yarn because too mainstream. He probably vapes organic catnip. He totally used to wake up in the middle of the night and run maniacally around the house till the dog started doing it too, now he’s over it. He sleeps 23 hours a day; but somehow does it ironically. He only chases free-range, grass-fed mice; and he’s thinking about going vegetarian anyways because of the environmental impact of factory mouse farming. He can meow all the words to the theme song from The Fresh Prince of Bel-Air, and he will almost always do so at a party for no good reason whatsoever.

Ok. I’ll stop. Enough about the hipster cat for now.

If by “a bit over” you mean “totally peaking,” then, yeah. The life cycle of a hipster fad (or any fad, really) is a lot longer than most people think. Maybe a few naysayers, yourself included, have started to pooh-pooh and say “nay,” but that’s little more than the first sign of a glacially slow process of cultural erosion.

It’s been more than a decade since proto-naysayers were deeply committed to “Oh, this posh hipster beer thing will never catch on.” Spoiler alert: they were wrong.

Today, you’ve got a craft brewery on damn near every street corner in damn near every fashionable neighborhood. The scene is strong, and some people have started to echo your sentiments of, “Well, surely this bubble will burst any day now.” I remember when people said the same thing about Starbucks. Spoiler alert: they were wrong. I think you’re looking at a Starbucks model, here, and not a MySpace model. In, like, fifteen years or so, you’re not going to hear, “Remember when we thought we would all be drinking hipster beer?” Nope. Instead, Triple IPAs will be the Pumpkin Spice Latte of the 2020s: Basic A.F., and totally unavoidable.

What is the difference between hipsters and briefs?

You can go out for a bowl of ramen without having to worry about fighting a bunch of unwashed briefs for a table. Hey-oooh!

For what it’s worth, I think you may be ever so slightly mistaken about the kinds of hipsters we’re dealing with here.