Struggling for trout while ponds dry to puddles

“San Diego Trout is an ad-hoc consortium of outdoor enthusiasts, scientists, conservationists, and consultants who share the common goal of improving and maintaining San Diego's wild trout fisheries in as many as possible of the 58 historic trout or steelhead streams in San Diego County”. On June 24, 1999, the organization performed several plants of trout in small waterways throughout the region, hoping to reintroduce lost populations and bolster other dwindling numbers in remote locations where trout were once plentiful.

The plants centered on Kitchen Creek, the San Luis Rey River, Pine Valley Creek, and Boulder Creek – the latter being the most difficult as it entailed a half-mile hike with five-gallon buckets, modified with taped-on aerators while “watching out for rattlesnakes”. Approximately 450 rainbow trout were planted in Boulder Creek, just above and below a small pool - named the Mine Pool for its proximity to an old 19th century gold mine. Within fifteen minutes, the three-to-eight inch ‘sub-catchables’ were feeding on insects, obviously taking to their new home. 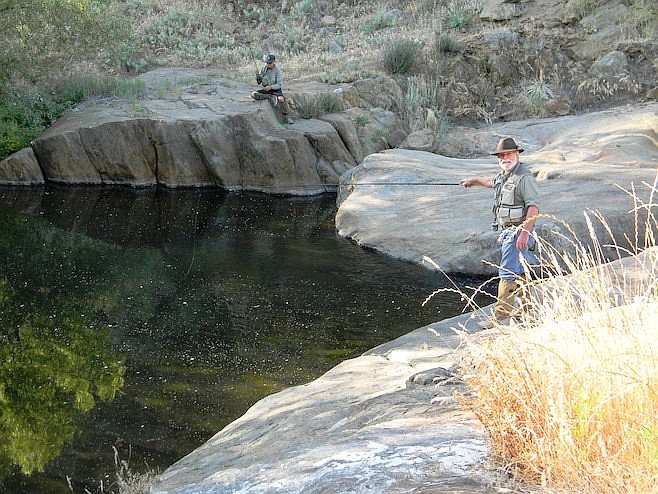 "Rainbow trout were planted in Boulder Creek, near the Mine Pool."

In 2012, the San Diego River Park Foundation was contacted by a local group of fly fishing conservationists, San Diego Fly Fishers, about a small population of rainbow trout barely hanging on in Boulder Creek near Descanso. There, in the upper San Diego River watershed, the small population of trout was threatened by drought, fire (and subsequent erosion), and a call for action was answered by several donors, resulting in the purchase of a total of just over thirteen acres bordering the creek and Gold Mine Pond. By 2014, the pond had dried to a puddle and most of the fish had disappeared. 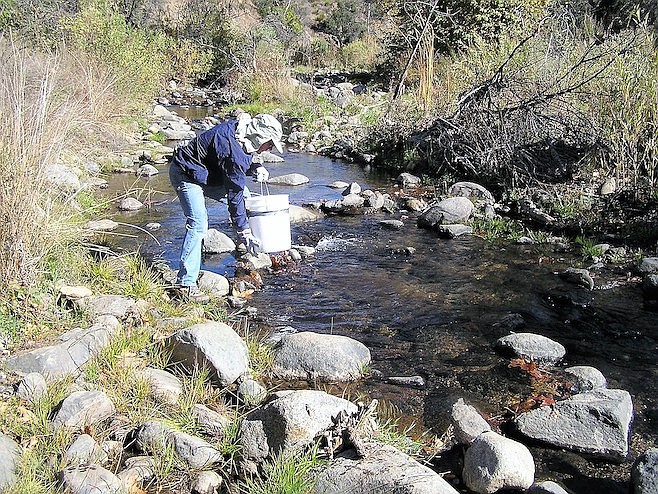 "They continued their struggle to return the creek to its natural state."

Still, the conservationists continued their struggle to return the creek to its natural state and save the native species that would normally thrive there. Their efforts include removing non-native and diseased plants and planting new ones, adding interpretive signs, creating a small plant nursery, and adding a real-time water monitoring station and new wildlife cameras. A recent survey of the area and project showed progress, but there is still a call for volunteers to help restore the habitat. As for the anglers that brought the declining situation of the area to light, their conservation effort has earned the San Diego Fly Fishers a United States Department of Agriculture Certificate of Appreciation for “outstanding volunteer performance and leadership in support of fisheries and wilderness”.

"Their effort has earned the San Diego Fly Fishers a US Department of Agriculture Certificate of Appreciation."

Monthly, on the first, fourth, and fifth Saturday, volunteers can help the San Diego River Park Foundation. This week, they are working to restore an oak woodland along Boulder Creek. Though volunteers need to dress appropriately and bring at least 32 ounces of drinking water, all other supplies will be provided. Community service hours may be verified. For full location information and to RSVP please contact volunteer at sandiegoriver.org or call (619) 297-7380. 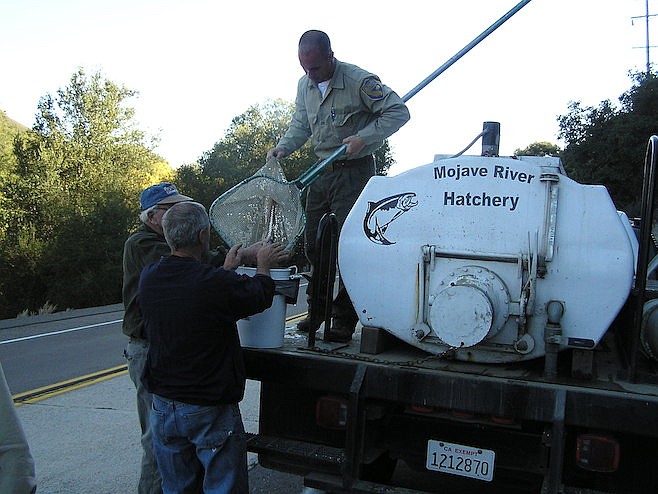 "A recent survey of the area and project showed progress, but there is still a call for volunteers"

Wow! I had no idea we had any creeks with trout in SD Cty. Thanks for enlightening.