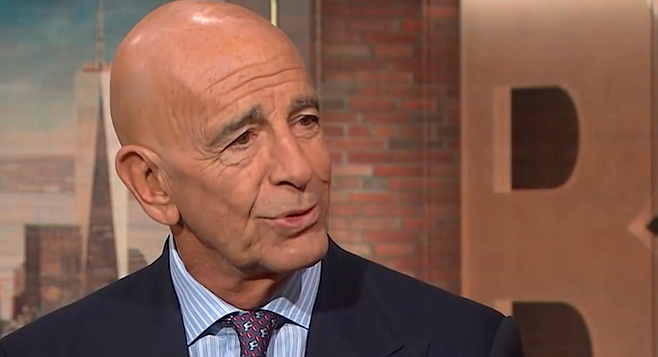 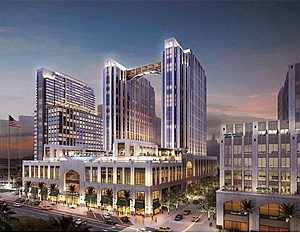 Ex-Union-Tribune owner Manchester and onetime UCLA professor Jacobs have long been cast as rivals for the role of San Diego's most generous political Daddy Warbucks, each raising millions for their preferred causes and candidates over the years and encountering resulting controversies.

Jacobs and Qualcomm, heavy backers of Hillary Clinton's presidential run, ran into trouble in 2013, when New York State Comptroller Thomas P. DiNapoli, a Democrat, hit the company with a lawsuit for refusing to open its books "relating to the use of corporate resources for political activities."

"Senior figures associated with Qualcomm, including the Company’s current CEO as well as his father, the Company’s founder and a Qualcomm director until 2012 are widely reported to be politically active and in recent years have donated more than $2 million of their personal funds in furtherance of political purposes," said the complaint.

"Indeed, Qualcomm’s CEO has given the maximum donations permitted under law to his favored political candidates. In addition, the Qualcomm employee PAC, which is required to disclose its own expenditures, receives - and in turn spends - considerable sums from Company personnel for use in the political arena."

To settle the case, Qualcomm's then-CEO Paul Jacobs, son of Irwin, subsequently agreed to provide more details about the company's campaign spending. "Qualcomm agrees with the New York State Common Retirement Fund that increased transparency for election-related activities by corporations is very beneficial," the younger Jacobs said in a statement.

This past March the Qualcomm contribution to the presidential inaugural appeared to have paid off when Trump invoked national security to block Broadcom's $117 billion hostile takeover bid for the San Diego company.

For his part, Manchester and his closely held development arm are virtual black boxes when it comes to political activity, their spending disclosed only if donations are made to campaign committees which are legally mandated to make the contributions public.

Still awaiting confirmation by the Senate of his presidential nomination as the U. S. ambassador to the Bahamas, the developer has been closely aligned in both business and politics with Thomas J. Barrack, Jr., the chief fundraiser for the 2017 inaugural committee now under scrutiny.

Barrack, who in 2015 bankrolled Manchester's convention hotel project in Austin, Texas with $295 million after others took a pass, was identified earlier this year by the New York Times as a major Trump connection to a bevy of well-heeledPersian Gulf princes.

"During the Trump campaign, Mr. Barrack was a top fund-raiser and trusted gatekeeper who opened communications with the Emiratis and Saudis, recommended that the candidate bring on Paul Manafort as campaign manager — and then tried to arrange a secret meeting between Mr. Manafort and the crown prince of Saudi Arabia," the Times reported.

"Mr. Barrack’s company, known as Colony NorthStar since a merger last year, has raised more than $7 billion in investments since Mr. Trump won the nomination, and 24 percent of that money has come from the Persian Gulf — all from either the U.A.E. or Saudi Arabia, according to an executive familiar with the figures."

A 1972 graduate of the University of San Diego's law school, billionaire Barrack teamed with Manchester to run the California fundraising operation for Trump's 2016 presidential campaign. "Tom Barrack and I just decided we would support the campaign to the maximum we can," Manchester said in comments made to Bloomberg that year.

As Manchester has continued to grapple with finding financing for his latest undertaking, the long-stalled $1.5 billion downtown Navy Broadway project renamed Manchester Pacific Gateway, speculation has grown that Barrack might ultimately play the same role he did with Manchester's Texas hotel, but the developer and his representatives have remained mum.

Back in May, Manchester consultant Perry Dealy was cited by the Union-Tribune as saying that "equity funding" for the Navy Broadway project was "coming from domestic investment funds tied to some of the largest Fortune 500 companies, including pension funds, but he would not disclose who they are. Manchester Financial Group, which will be managing general partner on the project, will also have an equity stake but at the end of the three-year construction period, it will be less than 50 percent."

In October of last year, Berkadia Hotels and Hospitality Group put out a press release saying that the real estate finance company had been "tasked with sourcing a 50 percent [loan-to-cost] non-recourse construction loan" for Manchester, "that will close by year-end 2017," but no subsequent word emerged.

Birds of a feather scheme and scam together.

Will look forward to seeing Thomas J. Barrack, Jr in trials when Mueller comes out with his report. Birds of a feather indeed.