Apartments for poor come to 13th and Broadway 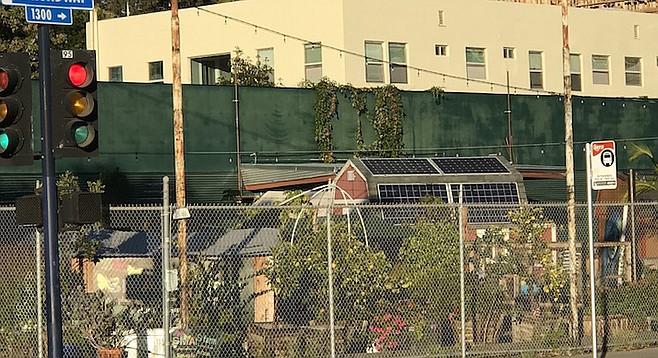 273 affordable housing units are coming to the East Village. On the northeast corner on 13th and Broadway, the new homes will take their place amid developments by companies that chose to pay the in-lieu fee instead of providing affordable housing inside their projects. Construction is scheduled for mid-2020 and is expected to be complete by 2022. 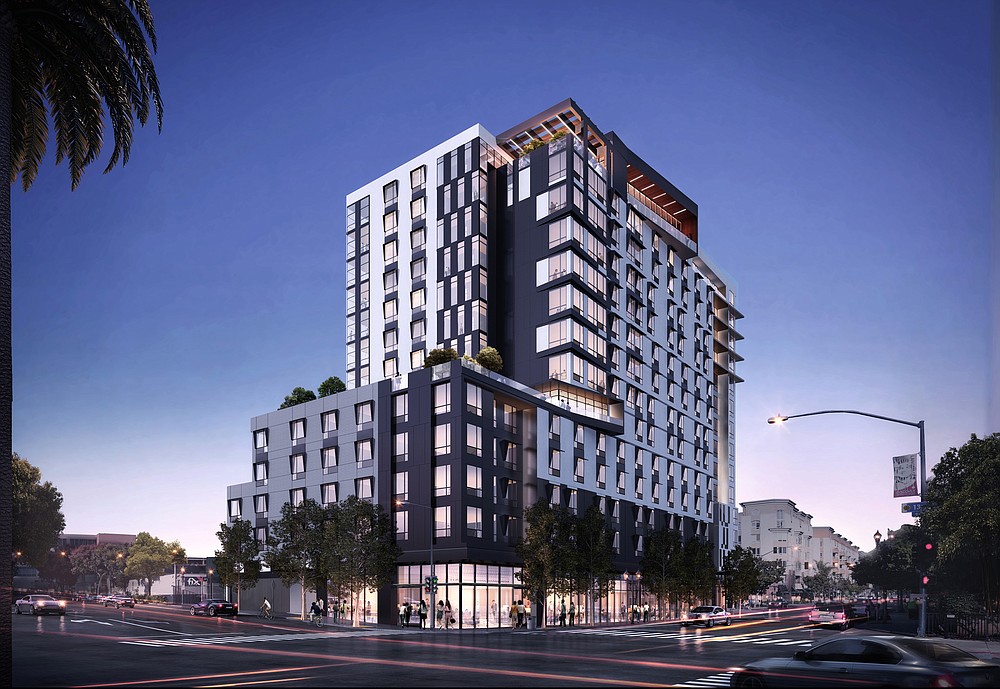 Rendering of new housing at 13th and Broadway

On the ground floor, the fourteen-story mixed-use building will house a Head Start center for children up to five years old.

Plans for the new building include underground parking, outdoor barbeque and picnic areas and a rooftop deck with greenery. Architect Joseph Wong Design Associates, the firm that designed Atmosphere on Fourth, worked on the project.

Adjacent to the site of a new fire station for the neighborhood, the City had already set aside the property for affordable housing. Father Joe’s Villages plans to break ground on another affordable housing project at 14th and Commercial the same year.

This is all news to the neighbors , for years now the CCDC website has told us a 6 story market rate rental building was slated for this spot. In addition to being frightening news for owners of adjacent units, it is ill advised to build a high rise public housing project at this site for everybody involved. First of all, there are the tens of thousands of needy families. Since this building only provides a few hundred units, virtually all of them will be shut out of the tiny number units available. High rise buildings are the most expensive to construct (check price of steel lately)? and you could build far more two story townhouses in a lower density area for the cost of this eyesore. In addition, land is less expensive just a few miles to the east, so selling this parcel to builders ready , willing and able to construct market rate luxury units on it would be much wiser. The proceeds could be used to build many times the number of units this will house. It would negatively impact far fewer people in a low density neighborhood for obvious reasons. High rises are also the most expensive to maintain. This is why are scores of these types of buildings only a few decades old are being torn down back east as I write, Once the police and elevator repairmen refuse to enter because it is too dangerous, they have to be torn down. Chicago and St. Louis learned this years ago (google Cabrini Green) and we should learn by their mistakes.
This unsightly view obstructing project will not only destroy views of adjacent units, it will be real estate poison for countless condo owners nearby, many of whom are on fixed incomes themselves. They have frequently put the lions share of their lifesavings into their home, and to see the value plummet can be heartbreaking. Many will be fearful of living near or even visiting a walkable area with this in it, as anyone who has lived near "the projects " can attest. In Chicago we used to pay higher cab fees to "go the long way" and avoid the projects, even fearful of driving by them. This area is one of our cities most expensive and high density neighborhoods, and has the most potential. We should not blow it by concentrating public housing where it will turn off homebuyers and developers alike. After world war two Germany decreased regulations on builders to speed up construction and lower their costs. They succeed spectacularly and now have the best housing stock in Europe. The UK built public towers like the one described above, and today they are imploding them to build decent housing for the countries burgeoning and frustrated home buyers. They now have one of the worst housing shortages in Europe, and we should learn from their mistakes.

Affordable housing is not housing for the poor. "Affordable" is defined as housing that is 85% of the market rate. With the average rent around $1,800 a month the "affordable" rate would be around $1,500. There is no affordable rental units for the poor. Housing for the poor are Section 8 housing funded by the taxpayers. Many San Diego employers pay $12 an hour which, if you read their job descriptions, they think is a great wage. $12 an hour is $2,000 gross which leaves very little to live on after you deduct the "affordable" rent. The problem is not the affordability of rent/housing but the lack of adequate pay and benefits for the hourly worker.

CORRECTION : The proposed high rise project in the able article is actually east of 13th street not west, so the CCDC website actually did not depict a market rate building on this site.
However, high rise housing for the poor is ill advised for multiple reasons including: 1. It is the most expensive to build and maintain, and therefore you could provide far more units if you built one or two story. Two story townhouses are also more practical for needy families. 2. Scattered , lower density projects impact less people than in a concentrated area, mitigating the NIMBY factor. 3. We have builders ready, willing and able to construct luxury units on this site. These would add to the tax base and facilitate development of the area as they would not turn off buyers and developers alike. We should not spoil the areas potential. 4. There is already an unsightly high rise project a few blocks west of this one, concentrating the poor in what could be a great area is foolish. 5. Proceeds from this valuable land could be high, that money should be used to build far more units a few miles to the east 6. They are tearing down projects just like these worldwide as I write : Cabrini Green in Chicago, multiple in the UK, including the one that just caught fire and killed people. They are learning that high rise, concentrated public housing is too expensive to maintain and is doomed to failure. Note the HOA fees are usually double in a high rise comp to two level for this reason. In NYC, they are converting thousands of units of public high rise to private market rate, after expensive, massive renovation, that should tell you something.
The list could go on and on but, a quick google search of the topic would be advised for our leaders, I am not sure they know the history of projects like this over the past half century, we should learn by others mistakes.

Not to worry our "leaders" have no sense of history as they think their ideas are new.

While I don't know the specifics of this project, I strongly support adding affordable housing developments to all areas of the city, which definitely includes Downtown and Uptown neighborhoods. Diversity of all kinds is the strength of our city. Also, income level doesn't determine ones preference for neighborhood types, we should be building center city apartment towers and town homes in less dense neighborhoods. Also, high rises in downtown make lots of sense as the future residents for the most part won't have cars, so the proximity to public transportation matters.

I live in Bankers Hill and would welcome a project like this in my neighborhood. I feel adding the this type of housing to the luxury buildings being built will help keep the economically diverse neighborhood I love from continuing to evolve into an affluent ghetto.

"They are tearing down projects just like these worldwide as I write : Cabrini Green in Chicago … "

Did you write this well into the last century? That was many decades ago. I don't know how you compare these projects, designed for a different purpose by different people for different people long ago. Cabrini Green in Chicago was vastly larger than this project in San Diego.

I visited Cabrini Green on business. Let me tell you what it was like. First, you park your car. Try to find a place that looks safe (not gonna happen). Then walk a half mile or so to the building you want (if you can identify it, they all look the same). Then wait for an elevator (hope it is working). Get in the elevator with the other 'interesting' people who have been waiting. When the door closes, notice that there are no lights inside. There also is no indication of what floor you are coming to. When the door opens, run outside for an indication of what floor you are on, and run back in before the elevator leaves. When it is your floor, pause for a moment to look down on the area from the balcony. Note the burned out hulks of cars, debris, people 'hanging out' and looking dangerous. If you are white, notice how unusual that is in this place. Now look for the apartment you want. You can guess the missing numbers by counting from those that still have numbers. Notice the barred windows and steel plated doors. Knock on the door you want and note how it hurts your knuckles. Wait for a frightened voice inside to reply.

I don't expect this new building to be like that. I do expect that you have a hidden agenda that makes you personally not like this project. Honesty is the best policy.

I lived on Dearborn and Maple, three blocks east of Cabrini Green for ten years . I don’t need a lecture on it, . We used to pay extra to go around the projects in a cab on the way to the airport , because people in the buildings were shooting out the windows and using cabs as targets . Could happen out of any building , but I’d say the risk is higher from a public housing high rise . When I lived there the line was “THE ONLY THING HOLDING UP THE NORTH SIDE GOLD COAST IS CABRINI GREEN “ it was real estate POISON. They were starting to tear it down. The Mayor said “ our 20 year experiment of high rise concentrated housing for the poor has failed, we need scattered low density housing , and should have done that from the beginning “ “I suspect you have a hidden agenda” ... you can always tell when someone has no facts to support their side because the first thing they do is hurl an insult at someone they don’t know... why not just : .....”well...your probably ugly ....and stupid....”. Hidden agenda ???? That I’m a San Diego resident and care about the city , and that I own in East Village and care about the area, that’s true and not hidden . I am an investor and x poor person . When I had no money I rented at market rate . I did know some other medical students in Boston who scored pads in some new high rise public housing , their fathers were connected . If you maintain a luxury high rise for the poor , if it doesn’t deteriorate into a dump, then OK, who gets in? You want to choose? I’ll tell you how it usuaally goes:, Generally, wealthy politicos and surgeons who know somebody get their friends and family members in. A wealthy doctor can have a kid who shows no income, so why help him pay the rent? Anytime you have something this small , if you spend public money to keep it nice (which costs a Fortune in high rises by the way ) it will be fundamentally corrupt . 248 units w 100000 people on the waiting list? Pleeze.... The tenants are either” lottery winners” u mite say, or they know somebody., either way it helps too few people , and drains resources from more practical housing alternatives . Everybody wants more units for the poor , just not in their backyards ., we should build as many as possible, negatively impacting as few neighbors as possible , and plopping it in the middle of a high density area is not the way to do it.,