Low density not good for Clairemont 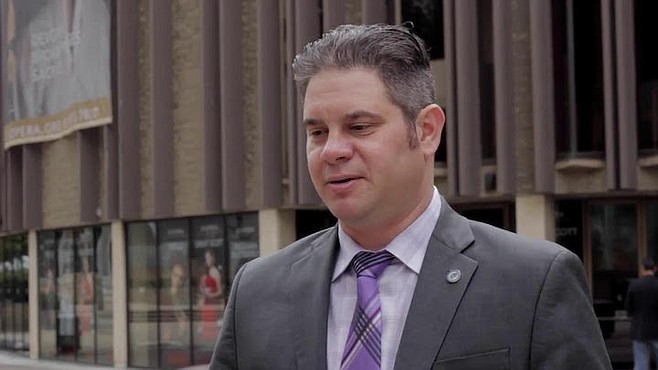 As they go off into the sunset with their $71M, Scott McMillin (son of Corky) remains behind to develop the Liberty Station Arts District’s last four undeveloped barracks into a boutique hotel! (“Liberty Station quietly sold for $71 million”, News Ticker, November 29) 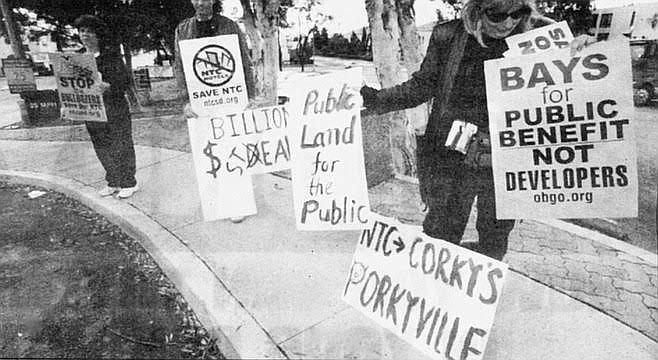 Protests against McMillin takeover of Liberty Station in 1999

He was handed this in secret meetings of the NTC Foundation, whose mission was to support the artist district at Liberty Station. No competitive bidding, just a handout: can you say, “welfare for the rich?” BTW, all of the meetings of the Board of Directors of NTC Foundation are secret since they have made it very clear that the public, including “their artists” are not welcomed! 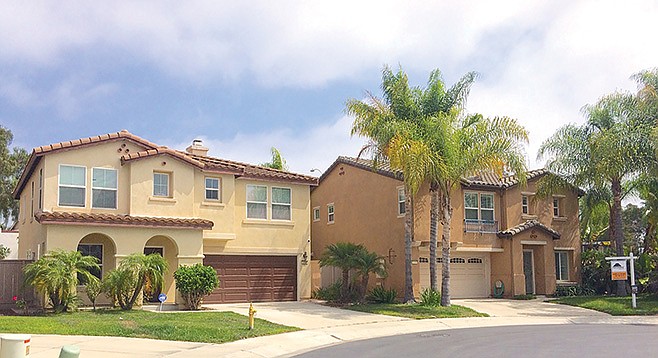 I have been reading your magazine for over 30 years now, I used to even advertise in it before the internet took off. I finished reading Herbert’s Neighbors Story (You might not want a neighbor like Herbert, Cover Stories, November 28), and not too many stories get my blood boiling, but wow, who breaks into their neighbor’s house, and worse than that, hurts the dogs! I felt so bad for the dogs this guy abused, and made the neighbors move out. Then you get new neighbors and he steals their dog never to be seen again, and Golden Retrievers are such nice pleasant dogs, how could anyone do this to a dog? Said the dog just got in his car, which of course sounds like nonsense to me. This man is a menace to society. Could you imagine if he moved in next door to you and started that stuff. I know they are waiting for sentencing, but this man is just a nut for doing that to the dogs. if this guy only gets 6 months instead of 16 years, I will be so unhappy. I sure hope the judge reads the San Diego Reader; my blood is boiling after reading this story, and it’s been one of the better stories I have read, not too many get me wanting to do something. On a side note, I always enjoy Tin Fork with Ed Bedford, the most touching was his story about always bringing Carla food home, and then I was so surprised when he said she passed. I felt so bad after reading that. His stories are good, I like when he talks about how he gets to the places to eat, I rode a bus the first day I got to San Diego for the Navy, and bought a car the 2nd day. So it’s like a travel story first, then a eating story, which I do enjoy. The Hipster and and the SD on the QT is just a waste of paper, more stories to read would be more enjoyable. You’re about the last free magazine about San Diego around; hope you can continue to keep printing. If folks did not get to read that story, please go online and check it out, it will make you sad and angry, it sure did me! Thank you.

The November 29 issue included a letter from “Clairemont Cares,” opposing a housing project in Clairemont. The writer states that “dense, crowded, haphazard…describe how Los Angeles has chosen to develop their city.” I would argue that the opposite is true: Los Angeles, like San Diego, is the epitome of a sprawling, suburban-style metropolis. LA has a few urban nodes, but the majority of the city, including the San Fernando Valley and most of the south side, is dominated by single-family homes. The reason L.A. has such awful traffic is because so many of its residents work in, say, Long Beach, and can’t find an affordable apartment closer than Riverside, so they commute 50 miles each way. Pushing new housing out into the wildfire zone will only make traffic worse, as those residents will still commute to work within the city. “Clairemont Cares” also addresses the local housing shortage by asserting that the solution is enforcing a requirement for 10% of new units to be “affordable.” Trouble is, since the writer only wants low-density housing built in his/her community, this would mean that relatively few new units could get built there. If only a few hundred new units get built in the coming years, that means only a few dozen affordable units, whereas thousands are needed. The writer also expresses concern about “neighborhood character.” Here again, concerns over higher-density development are overwrought. The North Park community has welcomed sensible high-density development along transit corridors while preserving its surrounding bungalow districts. As a result, central North Park is thriving and vibrant. No offense to our friends in Clairemont, but that area brings to mind tedious, auto-oriented strip malls, rather than the walkable, interesting neighborhoods that can only be supported by clusters of higher-density housing.