Maybe you should give Festivus a shot 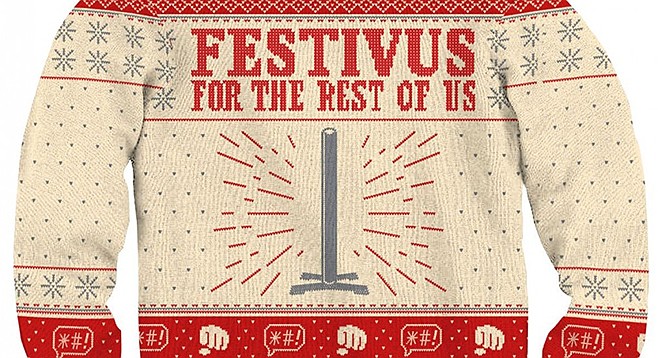 With the so-called Holiday Season fully upon us, one cannot engage in the world without fielding a barrage of “Happy Holidays!” and other such seasonal well-wishes. As if it weren’t enough to be forcibly bombarded with others’ good cheer, I also must listen to everyone and his brother complain about how he wishes the sign in the window at Target said “Merry Christmas” instead of “Seasons Greetings,” or vice versa, and nobody seems able to leave well enough alone. This year, I’ve hit on a possible solution. We should invent a new holiday, but it will be the kind of holiday that doesn’t really care about other holidays, where everybody can just kind of agree to disagree about the importance of winter holidays generally, and instead of the half dozen (or whatever) other winter holidays, everybody uses this one holiday for a benign stand-in. What do you think? If you were to design a perfect catch-all holiday, what would it look like?

Sometimes, I think I’m the most over-it dude around; but you, sir, and people who share your general saltiness, will always be there to prove me wrong.

That said, maybe you should give Festivus a shot. Most people think Seinfeld invented the anti-holiday, with its unadorned aluminum pole and oddball traditions like “the airing of grievances” in lieu of traditional seasonal cheer, but the credit actually lies with former Reader’s Digest editor Dan O’Keefe, who created the holiday as a private family tradition in the 1960s.

O’Keefe’s original anti-holiday embodied the hipster spirit of doing random things for no other reason than that you wanted to do them because they are so random. The Seinfeld version maintained the hipster spirit by taking the idea and running with it; in a sense parodying something that was already a parody. Bravo, hipsters.

Many modern Festivus celebrants (Festivants?) fall short of the innovative hipster aspirations of early Festivus practitioners (Festivizers?). Too many Festivus fans (Festivians?) go on Amazon and buy their very own Festivus poles, or perhaps Festivus-themed Ugly Festivus Sweaters for Ugly Festivus Sweater Parties. Lame! The whole point of an anti-holiday celebration is to reject the consumerist trappings of the holiday season, but I guess these wannabe Festivus revelers (Festiv...oh, never mind) didn’t get the memo. Thus, I roundly reject any derivative anti-holiday celebrants, Festivus or otherwise.

On the other hand, if you’re getting into the anti-holiday spirit by putting your personal stamp on an alternative celebration, that I can 100 percent get behind. Make up your own un-holiday traditions: eat ice cream and waffles for dinner every night during the last week of December; pull all-nighters on every Thursday between Thanksgiving and MLK day in order to better commune with the long darkness of winter; watch Die Hard and take a shot of Jack Daniels every time John McClane does something awesome, which is pretty much constantly, so, if you really want to watch Die Hard this last one might not work out so well. It really doesn’t matter what you do, so long as it represents a good faith effort to differentiate yourself from the rest of the mundane world.

Maybe someday your very own quirky tradition will spread like wildfire, and then some cheeky future hipster will be chastising future people for unoriginally parroting your ideas. You never know till you give it a whirl.