If he can raise funds, Intends to fly anti-Spanos banners again 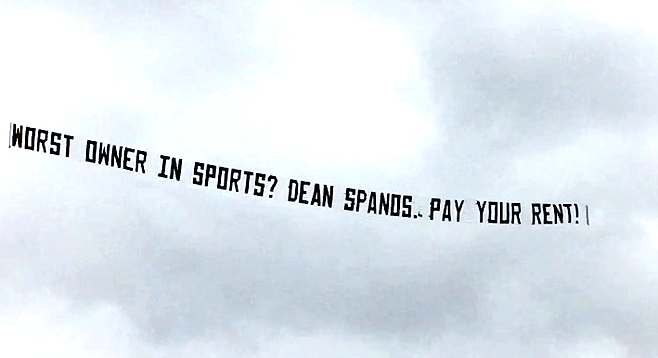 Joseph MacRae, who sponsored the flying of anti-Chargers/anti-Spanos banners over StubHub Center in Carson (L.A. County) last year when the Chargers were playing there, intends to repeat this year if he can raise the money.

He is trying to get financial support via GoFundMe. “The work we did by generating national media, going viral, and making our voices heard was the whole point of the campaign!” MacRae writes on GofundMe in a post named “Baby Dean Spanos.” Last year, there was controversy over whether the Spanos family asked the Federal Aviation Administration to ban the flights. The family claimed it didn’t. The administration told a Union-Tribune columnist that the law requires a waiver to fly over a stadium with more than 30,000 seating capacity during a game. StubHub seats only 30,000 and the Chargers can’t even fill that.

“So what’s next? The flyovers will continue,” writes MacRae, if he can raise the funds. In 2019, the team hopes to play in a new Inglewood stadium it will share with the Los Angeles Rams.

Where was this guy when he was needed in San Diego? The Chargers paid no rent at all for years. So does this mean they're getting a freebie stadium in LA now? That's what it suggests to me. Maybe they'll prefer to stay at StubHub and freeload, rather than pay, pay, pay for the use of the new for-profit palacio being built for/by the Rams.

Visduh: I disliked the Chargers, too, because for years they fleeced San Diego. Then they deliberately alienated the community so the NFL would let them move to L.A. I doubt if they are getting a freebie deal in L.A. The owner of the Rams, who is building the new stadium, is contemptuous of Spanos. Best, Don Bauder

Could that contempt for Deano and sons result in the sale of the team? It seems to me that having a landlord--who is also a competitor--who doesn't like you would be a sure formula for failure. Another owner might do far better in sharing the new stadium. Then there's the claim that the move to LA doubled the value of the team, although I can't follow that reasoning.

IMHO, Deano should have stayed put, enjoying his stupidly sweet deal for the existing stadium. He could have kept playing on that unreasoning "Charger Mania" and kept raking in the lucre.

Visduh: Many of us spent many years hoping the Chargers would be sold. It didn't happen. Possibly when the two teams are playing in the stadium in 2019 (if the stadium is complete by then), the mutual contempt of the owners will cause the Spanos family to sell. Best, Don Bauder

don bauder, It was announced early last year that the teams won't begin playing until the 2020 season.

As long as The Chargers paid the early exit penalty when they left San Diego I say, Let it go folks, Spanos is L.A.’s problem now.

The sad part, even with the penalty payment, San Diego still owes millions in bond payments for the ‘97 stadium expansion Spanos demanded. However, the taxpayers really did dodge a bullet by rejecting a new stadium. While the payments for the 97 expansion bonds hurt, building a whole new stadium for the lame-ass Chargers’ owner was ridiculous.

JustWondering: Absolutely. It was ridiculous that the San Diego establishment even attempted to put together a stadium plan that would please the Chargers. San Diego was the team's second choice -- maybe third, despite the enormous profits they piled up while playing in the city. Best, Don Bauder

In L.A. a few weeks ago, stores already had more Chargers gear on clearance than any other clothing. Good riddance to bad rubbish across the board.

Cassander: The Chargers couldn't even fill a 30,000 seat stadium at StubHub. Will they be able to fill one more than twice that size? Best, Don Bauder

JustWondering: Agreed. Would be interesting. I wish there were numbers on that. I am sure the teams and the league have some idea, but they would never reveal it. Best, Don Bauder

Mike Murphy: The stunt will no doubt have less appeal this year.. Best, Don Bauder