An eggless breakfast is one thing, but an eggless quiche? 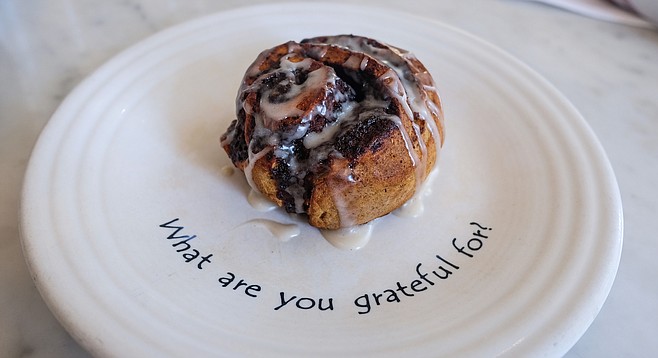 The best part of a cinnamon roll is the gooey center portion, shielded just enough by the outer rolls that it doesn’t quite bake through, so instead of crusting up, it remains entirely soft and almost doughy. Turns out, that can also be true of vegan cinnamon rolls.

I paid a morning visit to plant-based Little Italy restaurant Café Gratitude, and found the place doing brisk business, per usual. I noticed young families getting together with their kids, a couple of casual work meetings taking place over pastries and coffee, and even one or two morning dates. None of this would have surprised me an hour later in the day, but at 10 a.m. I’d have to call it revelatory: do vegans eat breakfast? 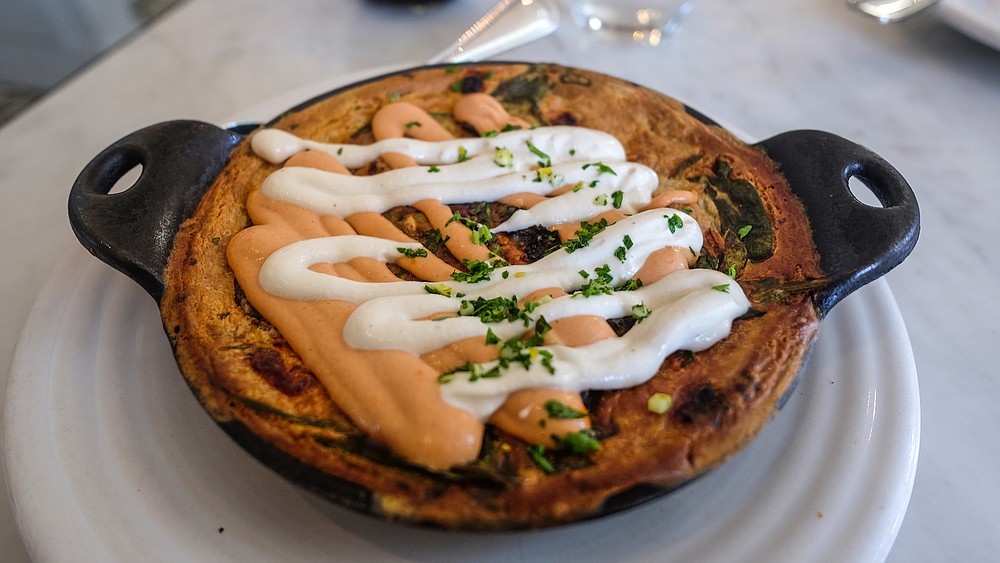 Of course they do. I just usually imagine it takes place inside the house, behind closed blinds, with homespun chia seed mash mixed with coconut yogurt and an acai berry blend. Actually, Café Gratitude provides a couple of breakfast dishes along those lines, plus cold-pressed juices and superfood smoothies.

All that seems too easy, though. I showed up wondering whether Gratitude could impress me with breakfast foods the way it has with vegan dinner entrees. As I dug in to the cinnamon roll, we were off to a good start. A very slight graininess was the only hint it deviated from any other roll I’d tried in my life; from glaze to gooey center, there was even a distinct creaminess throughout. I was halfway through the thing before I learned the true shock of it: like all of the restaurant’s baked good, this one is gluten free. Mind blown.

My next dish would present a greater challenge: replacing eggs as the centerpiece of a meal. Specifically, I ordered the chick pea quiche.

I’ve read that something called aquafaba makes a good vegan egg substitute, which is remarkable because the stuff is basically the brine you find in a can of chickpeas. Having leeched starch out of the legume, the remaining aquafaba whips up into a froth that resembles egg white when cooked, both visually and texturally.

Of course, quiche achieves its nearly custard-like texture due mostly to the aerated mix of yolk and cream, so a quiche lacking both ingredients sounds like a stretch of the imagination. It doesn’t look great either: though well presented in a cast iron skillet, the flat looking dish, slathered in a cashew-based aioli, looked every bit the part of a vegan fake-out.

It did taste better than it looks, though more frittata than quiche, with a texture akin to mashed potatoes, and a flavor that reminded me more of a pot pie. Featuring tomatoes, onions, and Kalamata olives, it made for a pleasant, if unusual breakfast.

If nothing else, starting my day with a vegan meal reminded me that, despite a lifetime being shown otherwise, eggs needn’t be part of a hot breakfast. With options including chilaquiles, pancakes, and avocado toast, this unlikely breakfast spot makes not missing eggs easy.