An unassuming cemetery in Mission Hills

Salvaged tombstones are the only indication that Calvary Cemetery ever existed 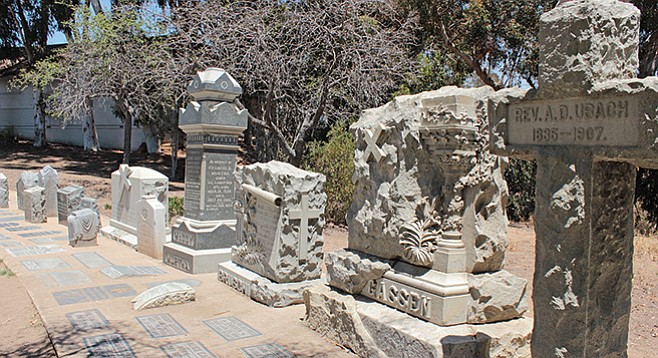 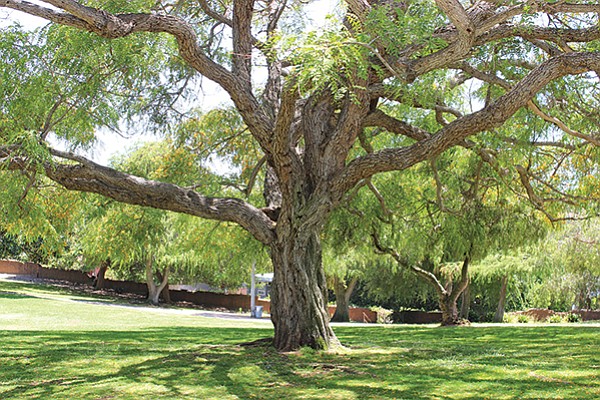 Sitting atop Pringle Hill in Mission Hills, next to the Ulysses S. Grant School, is Mission Hills Park, also known as Pioneer Park and originally named Calvary Cemetery. This unassuming cemetery holds people that date back to when San Diego was an outpost with a population of 250. While the headstones have been removed, except a bank marking a memorial and commemorative ground level plaques, the sprawling lawn, with its non-native plants, now has a children's play area, restroom facilities, and an open space that accommodates summer concerts and permitted picnics and weddings. 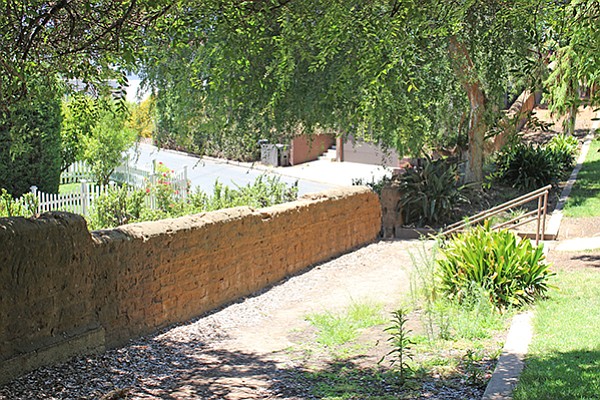 From the parking lot, turn right and head south, taking the concrete path through the Peruvian pepper trees. To your right, remnants of the old adobe wall that once enclosed Calvary can be seen along the southern boundary of the property. Early San Diegan Albert V. Mayrhofer, deeply troubled after repeated vandalisms, collected $15,000 in small donations from descendants of those buried in Calvary and appealed to the Works Project Administration (WPA) to help secure funds and workers to build an adobe wall around the cemetery. After months of bureaucratic red tape, Mayrhofer appealed directly to the White House and secured the support of President Franklin D. Roosevelt. The old stairwell descends onto Pringle Hill and offers a view of the southern side of the old adobe wall.

As you make your way east along the concrete path, you'll pass exercise equipment on your right. Further east you will come to the Frank Antonicelli Memorial Bench, named after the Mission Hills nurseryman who spearheaded the creation and beautification of Pioneer Park. Antonicelli was buried in the defunct Calvary Cemetery in 2002.

As you continue east along the path, you will come upon an internment memorial on the right, consisting of six ground level plaques and a dedication set in concrete in 1988. The plaques list some of the names of those interred at Calvary. In 1957, California enacted laws that allowed the government to convert abandoned cemeteries into pioneer parks. The law also provided for the removal of headstones and memorials and the creation of a central memorial to honor those buried during the life of the park. In 1961, the City began the process of converting the cemetery into a park and in 1968, the Catholic Diocese executed a quit claim deed, abandoning the property. In 1968, through a municipal law, San Diego declared Calvary Cemetery to be abandoned and soon commenced to remove and dump the tombstones into a ravine at another local cemetery, Mount Hope.

Beyond the internment memorial in the southwest corner of the park is a bank of salvaged tombstones serving as a memorial to prominent early San Diegans and is the only indication that Calvary Cemetery ever existed. Thanks to a living pioneer, F.H. LaBaum, the tombstones were preserved. In 1949, LaBaum visited Calvary Cemetery and, shocked by what he found, wrote a letter to the San Diego City Council and the San Diego Historical Society asking, "Are not Albert V. Mayrhofer, who restored our Mission, and Father Antonio D. Ubach, San Diego's first parish priest, worthy of better environment than we find here?

If the property is owned by the City of San Diego, then it should seem imperative that this hallowed ground be effectively maintained as one of the City's historic spots." Albert V. Mayrhofer was one of San Diego's most prominent Catholic lay persons and, despite the poor condition of Calvary, insisted on being laid to rest there because a brother who died before Albert was born was laid to rest in the cemetery. Albert died in 1948, and Marie Louise Mayrhofer was so concerned about vandalism at Calvary that she refused to put a marker on her husband's grave for over ten months, for fear that her husband's resting place would be violated. Father Ubach and Albert Mayrhofer rest side by side at Calvary.

Also among those buried at Calvary are two prominent early San Diegans, Captain Cave Johnson Couts, "a dashing West Pointer," and his wife Ysidora Bandini, "the loveliest of the Bandini daughters." Both are buried side by side in Calvary Cemetery. Captain Couts was a member of the same class at West Point which produced U.S. Grant, Robert E. Lee and William Tecumseh Sherman. Ysidora's father, Don Juan Bandini, had a cattle ranch on Coronado Island and a sheep ranch on North Island. Additional portions of the old adobe wall can also be seen along the eastern border of the park.

Discover an historic cemetery that is now a recreation area 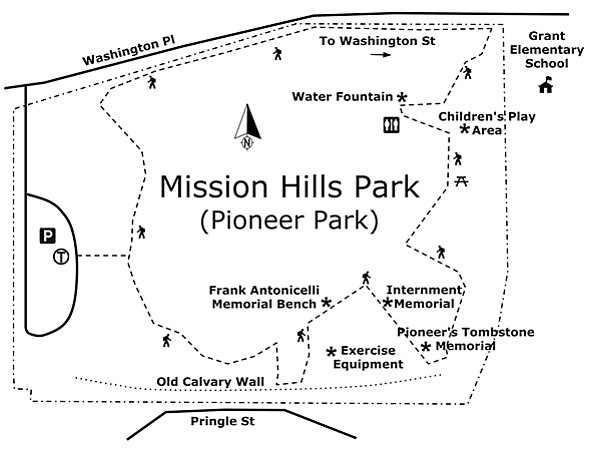 Driving directions: (Mission Hills) From Interstate 5, exit Washington Street and head east up the hill for 0.9 mile. Turn left onto Goldfinch Street. In one block, turn left onto Fort Stockton Drive. In two blocks, turn left on Ingalls Street. In one block, turn right onto Washington Place and go 0.3 mile. The park will be on your left just past Grant Elementary School. There is a small parking lot limited to a handful of cars and there is also street parking. Hiking length: 0.5 mile; around the park. Allow 1 hour exploring and walking time. Difficulty: Easy. Gentle slopping lawn and concrete walkways easily accommodates strollers, wheelchairs and dogs on a leash.

Not to quibble too much, but West Point didn't graduate Couts, Grant, Sherman and Lee the same year. Yes, Couts and Grant were members of the class of 1843, but Lee was far older, having completed his studies there in 1829, and Sherman was of the class of 1840. Once these bits of misinformation get circulating, they can be persistent.