Rain messed up our pedals

"I’d rather play in the desert than Florida.” 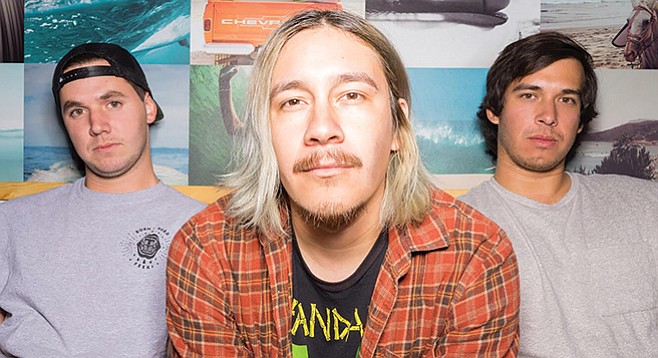 Drummer Jeremy Hilliard of Mira Mesa pop-punk band Lighterburns happily paid his Warped Tour dues. He or one of his bandmates volunteered as a tour tech on the three previous tours, just to get a shot to play on a future Warped stage.

They were rewarded by Warped promoter Kevin Lyman: Lighterburns were tapped as the only San Diego band to play all 38 dates on the 2018 Warped Tour. The tour, credited with giving crucial career boosting exposure to bands such as Pennywise and blink-182, has shut down after 24 years.

“It’s the one break you get that every band works for,” Hilliard says. “All of our favorite bands got their jumpstarts from the Warped Tour. For me it was Fall Out Boy and My Chemical Romance. For Alphonso [Vargas, singer/guitarist], it was the Vandals.”

Hilliard says there are six or seven stages at each Warped Tour date, and that this year Lighterburns always played on the stage thought to be the lowest rung on the ladder. He says if there was a 2019 Warped Tour, “We could see ourselves as one of the bands who got to move up a stage or two.”

But he’s not complaining.

“I think just being on the tour added a lot of value to our name. It put us in front of a lot of people.”

He says the Warped connection gave Lighterburns invaluable connections with other bands, including the pop-metal Assuming We Survive from the Inland Empire.

“Before the Warped Tour, we had a hard time getting [booked] into anywhere,” says Hilliard. “Now, we definitely have an easier time getting shows.”

Hilliard has a few tales from his first U.S. tour.

He says the smallest Warped crowd was in Jacksonville, Florida which drew just 3000. “We had a really bad rain day in Georgia. The rain really messed up our [guitar effects] pedals. After a minute on stage, they called for an evacuation. Most of us just wanted to get out of Florida where these random hurricanes roll through. I’d rather play in the desert than Florida.”

Hilliard says the Midwest seemed to be more into metal than the rest of the country. And while some crowds, like those in New Jersey, seemed less friendly to out of town bands selling CDs, there were bright spots. “Most people just walk past you. At the same time, you’d find people like this girl in Canada who said ‘If you have a CD, I’ll buy it off you.’ I’ve never before seen anyone who was actively looking to buy demos.”

Lighterburns was the host band for the BBQ afterparty on 20 of the 38 Warped Tour dates this year. “We’d basically play our set at, like, 3 in afternoon and as soon we were done playing and signing CDs we’d leave right away to go to Costco and get 250 hamburgers, 100 hot dogs, mayo, mustard, and buns. The BBQ after party at the end of the day was the one time everyone on the tour would hang out. It was a good way to meet the other bands.”

He says there was just one problem from a member of one of the headlining bands. “He wanted to cut in line. He pulled the ‘Do you know who I am’ card. We said, ‘Yep, we know, but you can’t cut in line.’”

To help them with their role as hosts of the BBQ afterparty, Hilliard asked one of their local friends to join them on the tour. They brought a local businessman known simply as Stitchhands, who has his own photo booth business.

“I usually do weddings and corporate events,” says Stitchhands, who said he shot anyone at the BBQ after party who asked. He says he would then email them a photo for free or accept a tip ($5 to $20) for an actual print.

Stitchhands says there were a number of people on the tour who had a “side hustle,” such as selling cold brewed coffee to band members and crew.”

While Warped Tour may have run its course, Hilliard says Kevin Lyman isn't done with live rock. “I don’t think he plans on stopping any time soon. He’s done lots of things like the Not Dead Fest with NOFX, Pennywise, and Agent Orange. He’ll still be around.”

Lighterburns appears Thursday, August 30 at the Merrow with Family Thief and Mammoth Indigo.