The squeezed turn from Aero to Murphy Canyon Dr. 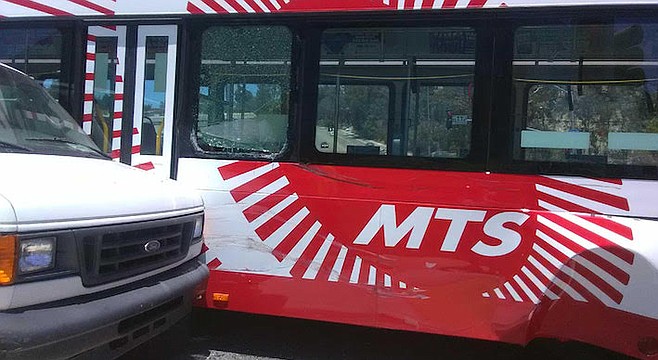 During our conversation about potholes (see “What It Takes to Fill a Pothole” on August 10), Misty Haskins expressed what struck me as an exaggerated worry about her safety on the buses she rides. She hadn’t yet told me about the bus/van collision she was in nearly two months ago. 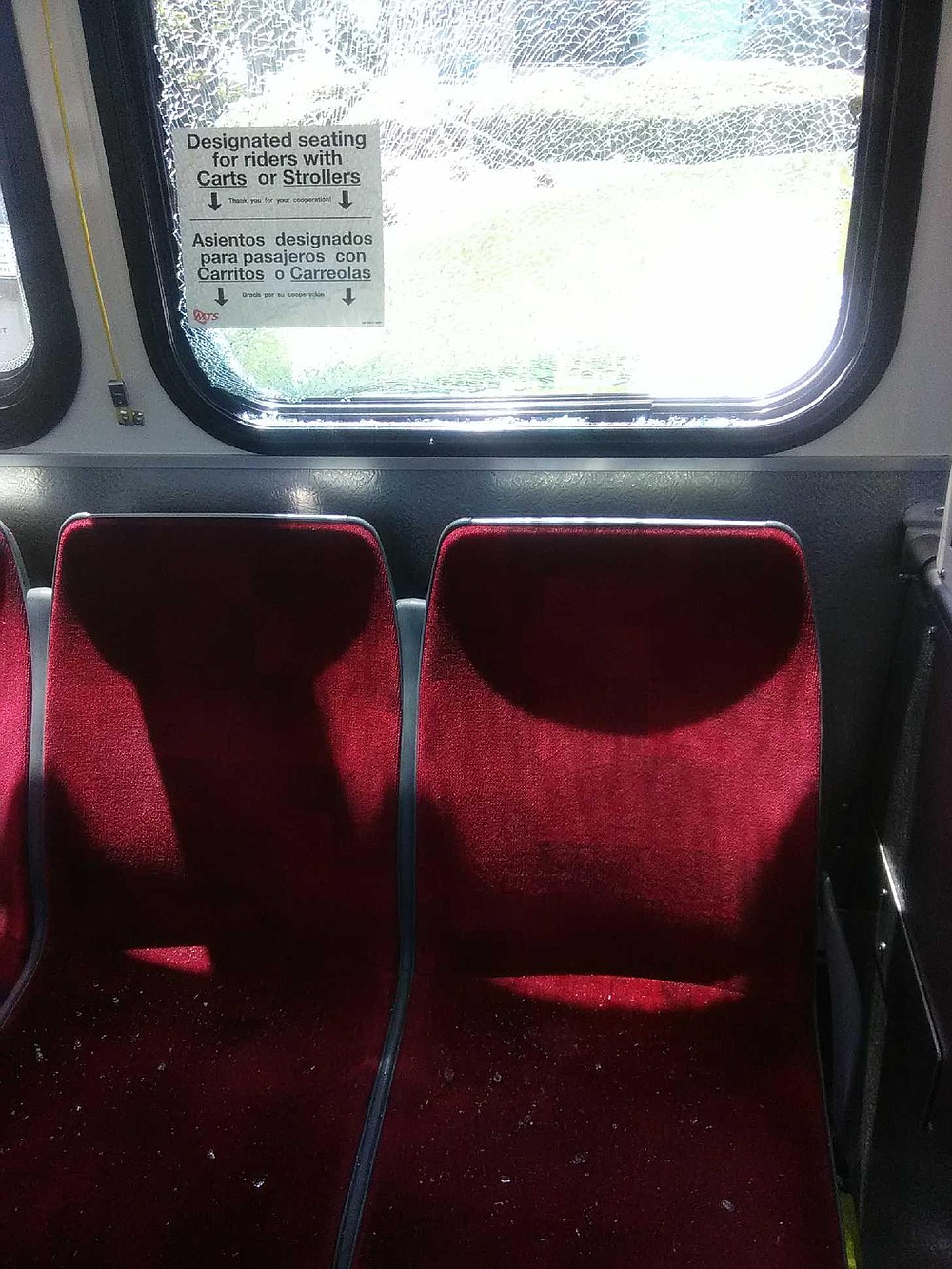 Shattered window. “The doctor pulled small pieces of glass out of my eyes.”

On June 25, as the MTS 928 bus she was riding on Aero Drive approached her destination, she noticed that a large white van was trying to squeeze a right turn in ahead of the bus as it began the same turn onto Murphy Canyon Drive. The two vehicles had, in fact, already made enough contact that a window on the right side of the bus was cracking.

“It didn’t seem like our driver was paying it any attention,” Haskins tells me. “So I yelled at her that we were having an accident.”

The bus continued to turn. “The driver could have made a wider turn. Instead, she made a very tight turn without looking in the right side rear view mirror,” says Haskins.

During the turn, the vehicles collided more forcefully, and the cracked window threw tiny shards of glass into the carrier’s interior. The van, meanwhile, was pushed onto the sidewalk. Both vehicles had by now come to a stop.

During the jolt and chaos inside the bus, Haskins hit her head and became distraught. She says she started crying but that she tried to console the driver, highly upset.

Besides Haskins, who had been sitting on the left side four seats behind the driver, there were two other passengers. They sat “somewhere” behind me, she says.

Soon enough, an MTS supervisor, a safety officer from Transdev (the company that runs Route 928 for MTS) and two police officers arrived. One of the policemen took from Haskins a statement about what happened and wrote it up in his notes.

“I asked him who was at fault,” she says, “and he said, too quickly I thought, that the van driver was on drugs and was the one. But I believe both drivers were at fault.”

Haskins says the MTS supervisor then drove her to a rendezvous she had already scheduled a block away with a jobs rehabilitation counselor. “I couldn’t even fill out the paperwork I was so shook up, so the lady did it for me. Then she drove me to my doctor.”

The following day, Haskins’s eyes hurt badly and had become red. So she made an appointment to see the doctor again. “I didn’t want to go blind,” she said. “The doctor finally pulled a bunch of small pieces of glass out of my eyes.”

Since the accident, Haskins has been trying to get the police incident report to see who was determined to be at fault. At the main police station on Broadway, “the lady behind the desk pulled the file out and was about to give it to me. Then she said I couldn’t have it because my name did not appear in the report. But she did tell me that the name of the officer who wrote it was Belanger and that I could reach him at the Mid-City station and ask that he put my information in the report.”

Haskins attends computer classes next door to the Mid-City station and has tried to reach officer Belanger repeatedly over the last eight weeks. But the station has often had a sign in front saying it was “closed to customers.” Sometimes, automated phone messages stated that its staff was short-handed. “And I’m real tired,” says Haskins, “of hearing ‘the phones are down.’”

But the day after Haskins left one more message, on Monday, August 20, for Belanger’s supervisor, an officer Poten returned her call. The lady “promised,” says Haskins, “that my name would be on the report the following day.”

(By the close of this story, an MTS representative promising what information he could get about the bus collision had not been received.)

Didn't the MTS supervisor or safety officer from Transdev ask if you needed medical attention.