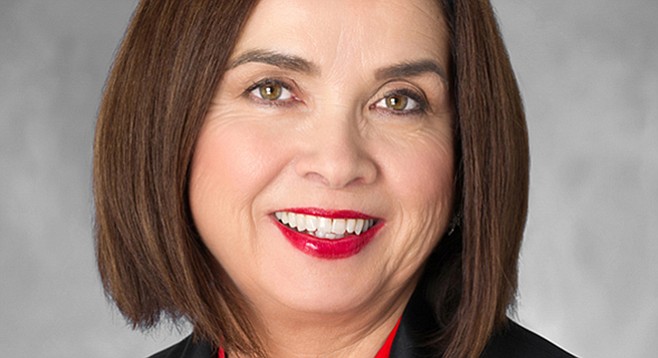 It didn’t take long for new San Diego State University president Adela de la Torre, on the job for less than a week, to collect a tidy boost to her already sizable pay. Picked as successor to departed campus head Elliot Hirshman back in January, de la Torre finally took charge at SDSU on June 28 with a starting base salary of $428,645. Then on July 24, California State University trustees approved a $12,859 raise for de la Torre, taking her to $441,504, at the very top of the system’s presidential salary heap. In second place among presidents, according to meeting minutes, is San Luis Obispo’s Jeffrey Armstrong at $429,915. San Jose’s Mary Papazian is third with $391,683. The 3-percent raises for each of the university system’s top executives were made retroactive to July 1. “I know that you share my belief that attracting, recruiting, retaining quality leadership for the Cal States is a significant concern,” CSU Chancellor Timothy White told the trustees. “Leadership of our campuses and executive office is critical to the overall success of our students and university.” As part of the deal, White got a $13,510 raise to $463,855, edging out de la Torre for top spot among all university officials. The salary actions drew the professed ire of Assembly Speaker Anthony Rendon, an ex-officio trustee. “This idea was never part of our calculus when we considered the budget,” said Rendon. “I’m certain that the results of our final vote on the budget would have been different.”

In June, legislators voted to hike CSU spending by $358.2 million as part of a deal to avert another tuition increase. Before de la Torre arrived in San Diego, she had been making $313,000 as vice chancellor for student affairs at the University of California Davis, when in 2016 she refused to open her Google email account to investigators for the university who were looking into allegations of improper influence against then-UC Davis president Linda Katehi. “Thus, there may exist relevant communications or documents that were not made available to the investigation team,” per the consultant’s report. On August 9, 2016, Katehi quit after investigators found “numerous instances where Chancellor Katehi was not candid, that she exercised poor judgment, and violated multiple University policies.” 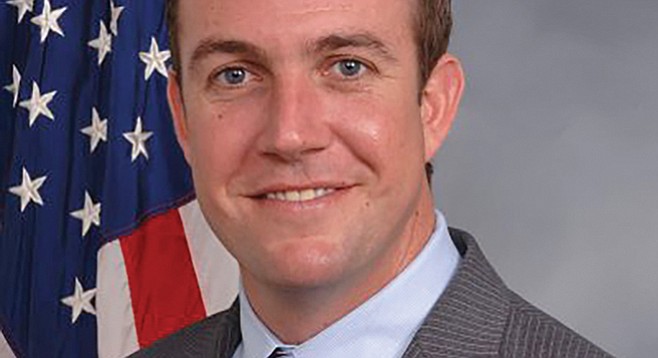 Republican House member Duncan Hunter, in hot water for alleged use of campaign cash for vacations, among other personal expenses, took off on a free trip to Poland last month courtesy of the America Polish Cooperation Society. Hunter’s four-day round-trip from Washington, D.C. to Rzeszów beginning July 19 cost sponsors $3000 in transportation costs, per an August 6 disclosure report by the congressman, which listed no other expenses. “This trip will serve to provide greater insight into the strategic position Poland has as an ally to the U.S. which is significant in my position as a member of the House Armed Services Committee,” Hunter declared as the journey’s justification. “I have been invited to attend a dedication ceremony of a location in Rzeszów, Poland, honoring U.S. General Merian C. Cooper who served in both the U.S. Air Service during World War I and volunteered for the Polish Airforce as a pilot during the pre-WWII conflicts that Poland had with Russia. Last year I was honored to place a plaque honoring General Cooper on Mt. Soledad, the U.S. military memorial located in La Jolla, California that was donated by the American Polish Cooperation Society. The Defense attaché from the Polish Embassy was in attendance. I also intend to view areas in Poland that might be suitable for U.S military installations or U.S. Veteran’s hospital or treatment facilities.”

Highlights of the trip were set to include “visiting the Arboretum and the Department of Physiography in Bolestraszyce,” with an agenda featuring “Plans of promoting polish nature and tourist attractions in U.S.,” along with a speech by Hunter. Also scheduled: “A reception and meeting with Marshal of Podkarpacie, representatives of the Aviation Valley, Starost of the surrounding poviats and Mayors of the surrounding Municipalities.”

San Diego city attorney Mara Elliott, girding for costly legal claims against San Diego cops, is advertising for “an experienced Civil Litigator in civil cases alleging excessive force by police officers.” Adds the online job notice, “First chair jury trial experience is highly desirable. The applicant’s cover letter or resume should state the number of applicant’s jury trials in which applicant was lead counsel.” No salary is listed… Ex-District Attorney Bonnie Dumanis, running against Nathan Fletcher for county supervisor, is still waiting to pay herself back from her 2014 DA reelection campaign. Per a July 25 filing covering the first half of this year, the Dumanis fund still had a cash balance of $4836, but owed Dumanis $47,000. Forty thousand dollars of the debt dates back to September 2014, with the rest incurred in June 2017, the filing says.

Just what do these university heads do that is worth the excessive pay they get?

This choice of a new president of SDSU stinks to high heaven. She was right in the middle of a scandal that led to the firing of the chancellor of UC Davis. While the UC was investigating the matter, De la Torre refused to cooperate and stonewalled the investigation. While her boss went down, she (who was vice-chancellor) came out with her job intact, and then used it as a stepping stone to an even bigger job.

I'd always thought that the CSU system regarded Cow Poly SLO as its crown jewel campus. Apparently that's not the case in that this new hire is now the highest paid campus president of all twenty-plus in the system.

Why does de la Torre make about twice what Gov. Brown gets paid? Brown makes $185,000 plus benefits. Something is obviously topsy-turvy.

And you wonder why the dingbats in Sacramento are now going after prop 13 for Businesses......all to pay fat salaries like this......disgusting.

According to the IRS, that income places her in the "1%."

They do absolutely NOTHING to warrant those salaries. The more money budgeted for public schools (all the way from 1st grade through college), the higher the paychecks for those in charge & less money for students. Put salary caps on these & all other overpaid , tax funded positions & see who really cares about the job & who is there strictly for the money.

You are totally correct. But try to convince school boards and those who decide salaries for college administrators those so-called high power educrats are out of line. The system seems to brainwash the decision-makers into thinking that nobody can run the operation unless the pay starts at about a quarter million bucks a year. What should happen and what will happen are poles apart, and this will continue--the new elite rules!