This week keeps on rolling 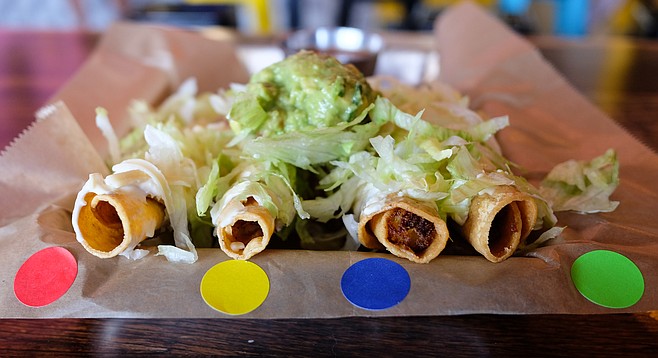 It seems like just yesterday I was writing about a new hand roll-only sushi bar, and finding a way to compare its seaweed wrapped fish and vegetables to tacos. But here I am, today, stumbling entirely by coincidence into a new rolled-taco only Mexican food counter. I won’t try to compare it to sushi.

But like the other restaurant, El Tianguis Rolled Taquitos makes sure to offer something for the plant-eaters out there. Out of four different kinds of rolled tacos served, half are vegetarian, and one of them vegan.

Specifically, it’s your choice of beef, chicken, mashed potato, and lentil & quinoa. Because El Tianguis lets you mix and match your order, it’s easy to sample the lot. The menu says three rolled taquitos go for $4.19, and five for $6.59, but when I requested four the cashier didn’t blink; just rang me up for $5.34. I imagine they’d do the same pro-rated portions up to and above the menu’s twelve for $14.28 price.

So I could keep track, the shop issued different colored stickers to mark the four different taquito flavors: red for beef, yellow for chicken, blue for potato, and green for lentil-quinoa.

No bones about it, the beef was my favorite. But I ate the four in reverse order, beginning with the vegan taquito, if only to give it a fighting chance. The lentils and quinoa were mixed together into sort of a mush, which doesn’t immediately sound appetizing, but remember there’s a wonderfully crunchy corn tortilla wrapped around it, offering all the texture the cumined bean and grain needed.

The mashed potato was nearly as good, with a smoother texture and spicier bent. Shredded lettuce and a scoop of guacamole come standard, as do sour cream and crumbles of cheese, so order accordingly if you’re strictly vegan. Otherwise, I’d encourage omnivores to include a couple vegan taquitos in your order for variety’s sake: they’re worth it, even slightly more interesting than the chicken.

Though it’s surprising to find a shop dedicated solely to rolled tacos, it becomes less so to learn the founder of El Tianguis hails from the same family that founded Delimex, a local brand that made its name making frozen taquitos found in grocery store coolers. Heinz bought the brand many years back, but it still seems fair to call this the next generation of taquitos. For the record, the rolled tacos of El Tianguis are not reheated Delimax products. They’re all made on site, from scratch.

Ian, do you know what oil they use to fry them? Just wondering if that is vegan as well.

Taquitos de papa and taquitos de queso are the best!

There's this little spot in La Piedad (that's a place in the middle of nowhere Mexico) that has rolled tacos de papa with some non-spicy red sauce to slather and top and go to town.

Those are the best taquitos in the world.