Drool over the stylish excess

More than 79 minutes of “successful and progressive prostitution.” 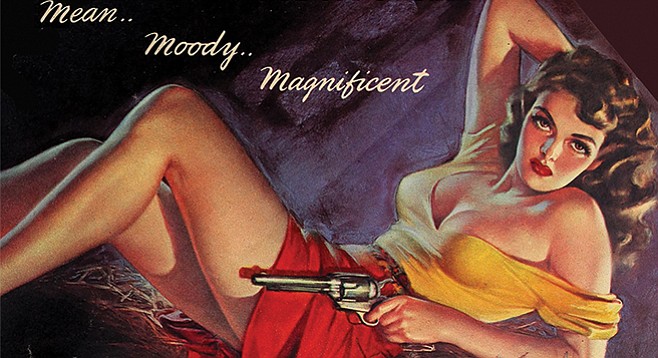 A western, a wabbit, and Marwene Dietwich come under the knife.

A polarizing item among critics and bluenoses, if not a general public that stayed home in droves on the picture’s initial release. Auteurists drool over the stylish excess — there’s nary a long or medium shot in the entire picture — while non-believers fault the film’s lack of story. (With Marlene Dietrich’s face as its subject and Josef Von Sternberg at the helm, who needs story?) Marlene once again plays a strumpet (she no more rolled cigarettes for a living than Holly Golightly survived on powder room tips) and as the Hays Office saw it, the picture was nothing more than 79 minutes of “successful and progressive prostitution.” Considering the continual battles the censors waged against Paramount, it’s a wonder the studio decided to go through the trouble of producing another smutty Dietrich and Von Sternberg opus. (It would be their sixth and final collaboration.) Demanding that Dietrich pay for her carnal ways, censors went so far as to suggest her recently blinded lover rise from his hospital bed and choke her to death.

The first American film to buck the almighty Production Code caused PCA honcho Joseph Breen to gasp, “I have never seen anything quite so unacceptable as the shot of the breasts of the character Rio (Jane Russell).” The Hays Office demanded that eight-feet of film - a shot of Ms. Russell bending over a sick bed - be cut by Howard Hughes. A two-year battle with the censors ensued, over what amounted to a few seconds of film. (The producer/director eventually split the difference and trimmed eight inches.) Despite the constant legal battles and theater owner boycotts, The Outlaw continued to set records almost everywhere it was shown. The film caused such a sensation that it didn’t play in New York until September 1947 when the ban was lifted. The film also sparked this legendary Dickensian aside: Garson Kanin and George S. Kaufman were walking down Broadway where they spotted five advertising billboards with Jane Russell striking tantalizing poses from the film. This prompted Kaufman to remark: “They ought to call it ‘A Sale of Two Titties’”.

Nugatory Heather Locklear wild west excursion aside, in just about every other way imaginable, LT:BIA is all I wanted to love about Roger Rabbit and didn’t. None of this rival studio creations vying for equal screen time; Disney has ducks and mice and cats aplenty, but only Warner Bros. has the Wabbit. And don’t give me Oswald or Max Hare. If either of those over-dressed rodents had taken off, there probably wouldn’t have been a need for a bunny called Bugs. Did Disney really think their Roger could even come close to taking the place of Bugs? This is the cinema’s most excellent hare, not some obnoxious, dim-witted annoyance with a voice that makes Screwy Squirrel sound rhapsodic. At its acme, Joe Dante’s direction comes close to capturing the irreverent spirit of the original Termite Terrace bad boys. An inactive Porky and Speedy lunching in the studio commissary and commiserating over their recent bouts with censorship is just one of many reasons this as much fun for grown ups as it is for kids.

Let's see if your readers get Kaufman's funny joke about "A Sale of Two Titties." "The Outlaw" is a terrific sexy romantic Western with tough Jane Russell (Rio) falling out of her blouse and in love with bad-boy Billy the Kid. I saw that movie in re-release a decade later with a high school boyfriend who was sort of a bad-boy himself. Loved every minute.

It's a much better movie than its reputation would lead one to believe. The spruced up DVD restoration is a revelation.