What was that smell near Scripps? 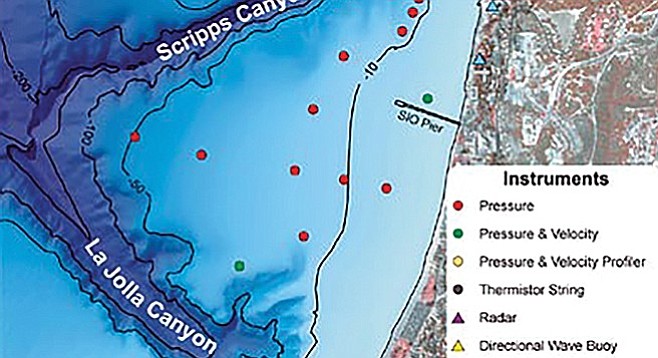 On Wednesday August 1, I caught a whiff of rotten eggs. Facilities workers at Scripps and Birch Aquarium checked gas lines to verify that it wasn’t methane.

After about half an hour, Scripps employees spread the word that the odor was coming from hydrogen sulfide. Russ Vetter, at the National Oceanic and Atmospheric Administration on La Jolla Shores Boulevard, explained that a biomass of decaying kelp and seagrass probably shifted position and slid down the underwater canyon offshore, releasing hydrogen sulfide gas. As a student at Scripps, Vetter studied life around hydrothermal vents, where animal-bacteria symbioses rely on hydrogen sulfide for nutrition.

“Not likely a risk when blowing in the wind,” Vetter said of the cloud that wafted over the beach.

Usually the hydrogen sulfide gas from anaerobic decay is released slowly into the water, where it oxidizes and does not reach the air. But when a huge mass of kelp accumulates in the canyon and begins to rot, it’s like a big pile of compost. When something disturbs it, it releases a lot of the gas at once. The gas moves through the water and enters the air as a noxious cloud, just like a belch.

Vetter noted that the Scripps Pier temperature is as warm as it has ever been in over 100 years of observations.

“Warm water holds less oxygen and also speeds kelp loss and microbial processes, so with climate changes the nature of such events is less predictable.”