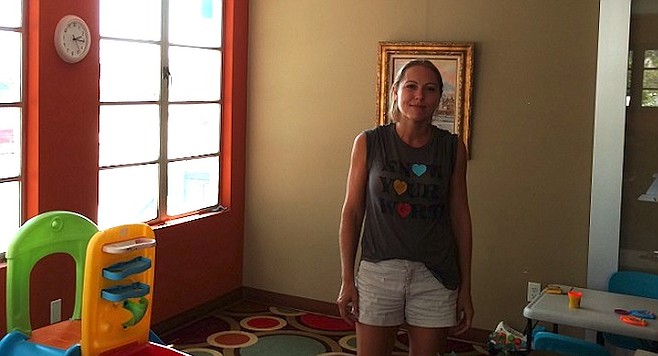 A month into its launch, a network of temporary shelters for asylum seekers arriving at the world's busiest border station in San Ysidro is beginning to take shape.

The Safe Harbors project, spearheaded by Dr. Bill Jenkins, has actually been years in the works.

"Our experience with immigration started in 2009, when we had a group of 22 Haitians who came to us seeking asylum," Jenkins explains from behind his desk in the modest office of a Normal Heights church, walls lined with a series of plaques and commendations. "They lived in the building, formed their own congregation – they'd conduct a joint worship with us in the morning and have their own Creole worship in the evening."

In 2010, a massive earthquake displaced hundreds of thousands of Haitians. At the time, President Obama offered a "humanitarian parole" allowing citizens of the island nation entry to the US. But Brazil, gearing up to host the 2016 Olympics, was in need of cheap labor to build stadiums and other venues. The country lured many refugees with the promise of abundant jobs, only to expel them in an economic downturn following the games.

Haitians then trekked north through Central America and Mexico in droves, with tens of thousands eventually making their way to Tijuana.

"A lot of people in San Diego don't know this, but we literally became a refugee camp at this point," Jenkins continues. "We didn't anticipate their coming, they just showed up and presented themselves to Border Patrol and said 'We're coming under President Obama's humanitarian parole.'"

It turned out that, in the aftermath of earthquake relief efforts, the immigration offer had never been revoked. Authorities had no option but to file asylum requests and wait for the courts to process the claims.

"These folks, many of them had the same clothes on they'd left Brazil in, they had maybe five dollars in their pocket and didn't speak English," Jenkins says. "So our Haitian pastor from the 2009 group received a call, asking if he was aware Haitians were here and sleeping on the streets. He gets in his van that says Haitian Methodist Church on the side, drives around Horton Plaza, and people literally ran to him."

That night, a dozen refugees living on the streets were provided with meals and a place to shower. They slept on the church pews.

"We had as many as 307 staying here in the building at one time, we're zoned for six. The city gave us a humanitarian award for that," Jenkins recalls, waving at a framed commendation from the city council just over my shoulder. "Then they told us to cut it out.

"After Obama closed the border [to Haitian refugees], the numbers began trickling down. By 2017, we were asking ourselves whether we'd accomplished our mission. Just as we were preparing to close our shelter, the United Nations' high commissioner on refugees came and asked if we're aware we're the only immigrant-welcoming shelter in Southern California. I told him he's got to be kidding me."

Only nine such refugee shelters exist along the entire southern border, and Jenkins says one in Arizona is at risk of closing. Instead of winding down his program, the former pastor decided to expand.

"We began to reach out to other churches, under the name Safe Harbors. I presented the idea all over and the feedback I got was all along the lines of 'That's a great idea Bill, you should do that!'"

Still, while other faith and charity groups were willing to offer up donations of cash and supplies, Jenkins couldn't secure the one thing he most needed: beds, and a place to put them.

"Three months ago, all of a sudden Safe Harbors began to get traction," he says. "It was 'zero tolerance.' It was when our administration began ripping babies out of mothers' arms. People got mad as hell and they finally weren't going to take it anymore.

Sojourn Grace Collective, a congregation that shares space on Cass and Chalcedony streets in Pacific Beach, is the first new facility in the network to open. Last week, community coordinator Sarah Nichter provided a tour of the facility just a few days into a two-week pilot program.

One room below the sanctuary has been adapted as a living area with couches, chairs, and a host of scattered children's toys, Next door, a cavernous space is partitioned into bedrooms by thin room dividers – a dozen cots are arranged for the four families, including six children, that have taken up temporary residence. Upstairs, a kitchen/dining area houses a refrigerator, several hot plates, and boxes of donated food along with a small play structure in one corner.

The space is empty during our visit, as the hosted families are out working with volunteers to process legal paperwork, obtain medical exams, or attend English-as-second-language classes.

"I know our hosts had previously been involved in a program to shelter homeless that was similar to this, so I reached out to the pastor and got a yes," Nichter says of the church her group rents space from.

"From the first meeting to when we started receiving guests was about six weeks. That might seem to some like a long time, but it's blown my mind how quickly this has all come together. I don't think it will take long to figure out whether or not we're able to do this and reconfigure our space to work on a more long-term basis.

"It's a bed to sleep in, a kitchen stocked with food, a safe place for kids – that's what we're looking to provide at a minimum," Nichter continues. Utilizing the network's other partners, refugees also get help with legal services and in finding long-term housing, as some cases can take years to wind through the courts. She also envisions recreational opportunities like an arts program as a "means to engage" with new arrivals.

Most people, however, don't stay in the program long.

"Sometimes the need is for one night – if a refugee has family elsewhere in the country they might just need a place to stay until they can get a flight out," Nichter says. Jenkins later adds that the longest a refugee is typically sheltered is two to four months.

"We provide emergency temporary shelter, we try to take a person who's come to us and doesn't know what to do next to catch their breath – we're an oasis, not the final destination."

Safe Harbors' clients, both Nichter and Jenkins emphasize, are all in the U.S. legally.

"The people here all have their legal papers, 99% of them are brought to us by ICE," Jenkins tells me the next day in his office. "I'll get two or three calls a week from ICE asking us to take people that are in detention, which is really just another word for prison. These people don't belong in prison.

"These are all law-abiding individuals who come here under US asylum law, international humanitarian law, and I believe a higher law in that every major religion says that we're to welcome strangers and to love our neighbors as much as we love ourselves. We want to make sure they have their day in court."

When the Soujourner Grace experiment ends, Jenkins will once again be responsible for about 40 people currently receiving aid, despite his official capacity for six. That's likely to change soon, as a dozen churches around the county are gearing up their own programs, both trial and long-term. Individual families are also completing a screening process to host refugees in their homes. Jenkins says the network will soon boast as many as 200 beds.

Great! Just what we need, more cheap labor available for exploitation of the low wage low/no employers who expect the taxpayer to subsidize their profits.

So whenever there is a natural disaster in the world, those displaced can claim temporary asylum and come to the what should be the last but has become the first resort, America. If they traveled through Brazil and Mexico, that is where they are supposed to request asylum. If people wonder why their wages have not risen in 20 years, but things cost two to three times as much, this is one of the little secrets. Just keep flooding America with cheap desperate third-world labor and let the people who fought and protected America subsidize them. The church thinks it's doing "Gods" work when it is really just a pawn in a massive human tracking phenomenon. More Section 8 housing, medicare, babies, food stamps, ESL classes, get them jobs while homeless Vets rot in the streets.

Medicare? To qualify, you must be 65 and "a U.S. citizen or a permanent legal resident who has lived in the United States for at least five years." So what displaced people do you know who are arriving here and getting Medicare? Please provide evidence of your claim. As for Section 8, it takes many years for applicants to get approved, even if you are a U.S. citizen.

Dude, you need to get up to the times and do some research instead of correcting grammar and spelling on The Reader.

Fact. And I am not going to do your research for you, learn how to use Google. Refugees can immediately apply for health coverage under the Affordable Care Act and even under many Medicare programs.

I suggest before you attack everyone on spelling and to prove out their comments, you do some f-ing research and learn how to use Google old man.

President Obama's aunt was a political refuge and lived in Boston on the cuff.