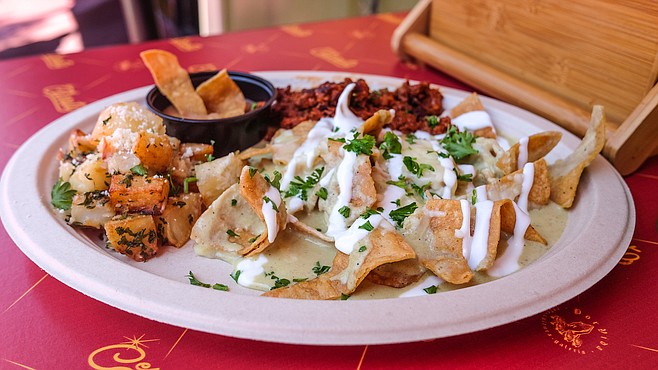 A fixture in Barrio Logan for more than 70 years, the tiny restaurant known as El Carrito sits inside a retired trolley car, a relic of nascent San Diego’s cable car era. After a stint serving traditional Mexican dishes as El Nuevo Carrito, the place closed and lay dormant most of the past year. But it’s come back this summer under new ownership, reinvigorated with a fresh coat of paint, upgrades, and repairs, resuming its rightful place at the center of a booming stretch of Logan Avenue.

Its young new owners have had a hand in revitalizing this block just south of Chicano Park, including opening the oft-bustling Por Vida coffeeshop next door. They were both there on hand when I visited midday over the weekend, chatting with customers and serving up a variety of traditional Mexican breakfast dishes as well as build-your-own omelets and lunch fare ranging from tortas to burritos. 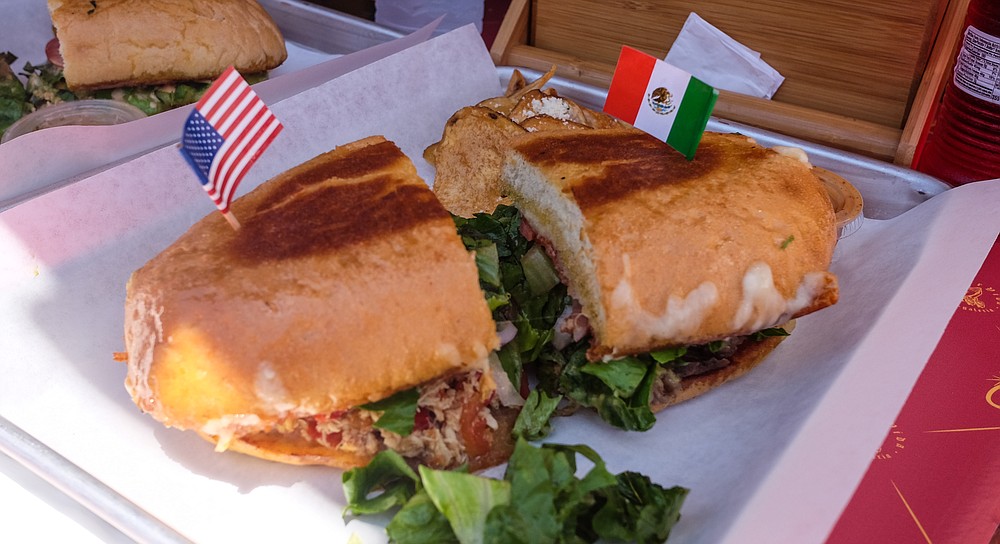 A La Forntera torta at El Carrito, with the Mexican flag planted on the carne asada half.

The crowd was decidedly receptive. Only a few small tables fit inside the trolley dining room, so most of the couples and families present dined at two rows of tables lining the sidewalk out front. As cute as I found the cleaned up trolley interior, I managed to find an open table outside, where there was more to see. Between the foot traffic, vintage lowriders parked out front, and colorful murals in both directions, Logan Avenue has a way of feeling more engaged with city life than the multi-million dollar facades plying urban development theory in other parts of town. 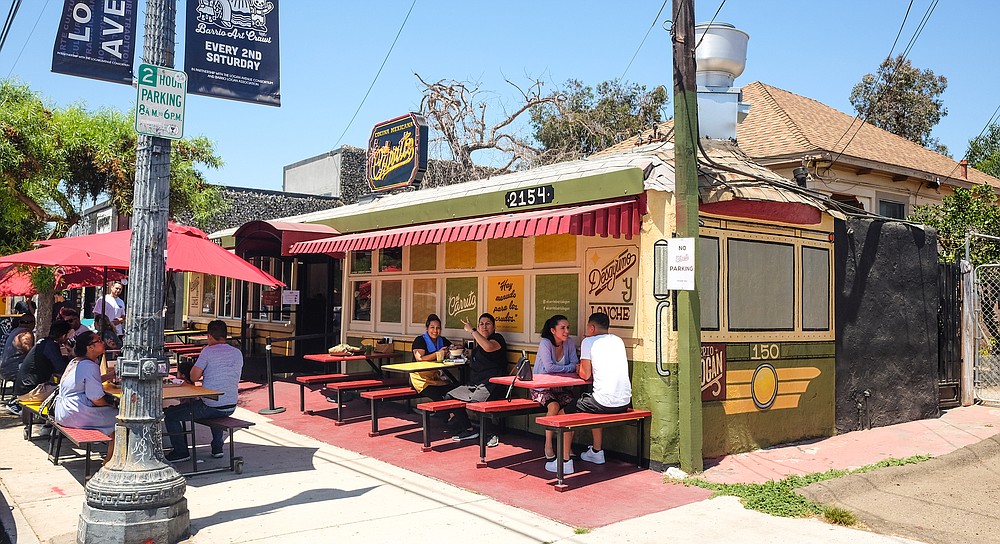 El Carrito, a restaurant inside a "little car"

I dug into a plate of chilaquiles, one of several central to the menu. The signature El Carrito chilaquiles plate tops tortilla strips with poblano salsa, poblano peppers, fire roasted corn, sour cream, and cheese for $8.99. At $7.99, El Azteca adds cheese and sour cream with fresh salsa verde. To any of these you may add protein for $2.50, whether you prefer eggs, chicken, fish, shrimp, or machaca.

I chose the Chicanos chilaquiles, attracted to its use of creamy avocado salsa ($8.99). To dress up the cheese and sour cream, I added chorizo to a plate that already included sautéed potatoes and a ramakin of frijoles.

I’m a relative newbie ordering chilaquiles, but these were the best I’ve tried yet, both in terms of texture and salsa, which may have been milder than the alternatives but still gave plenty of flavor.

However, when plates arrived at the next table, I saw a preview of my next visit to El Carreta. This guy ordered the $8.99 torta, La Frontera. Named for the border, it may be the perfect sandwich for indecisive eaters in this border town. One half of the sandwich features carne asada, the other half chicken. A toothpick planted in one half waves the Mexican flag, while the toothpick flag on the other waves the stars & stripes.

“Which half gets the American flag?” I asked an owner.

"Which side do you hope?” came the cryptic response.