Save $2 and get the shredded beef burrito instead 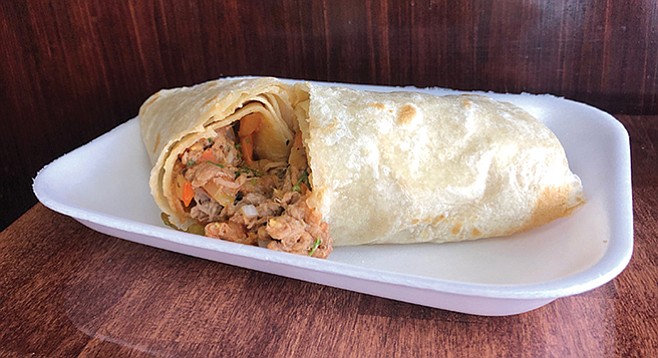 What is the most San Diego-specific hipster thing you could do?

On balance, our local hipsters are much the same as hipsters in any other urban locale worthy of an Eater Heatmap, an indie film scene, and the occasional song lyric shout out. Even so, the devil is in the details, and knowing your local hipsters requires some subtlety of understanding; sort of like how dogs are all technically canis familiaris, and an alien visiting earth for the first time might reasonably conclude they’re all basically the same thing, but anyone with an ounce of sense wouldn’t mistake an Irish setter for a dachshund.

I think the most San Diego hipster thing anyone can ever do is order a burrito. I realize that requires some explanation.

Say you and your friends go see a band at the Casbah. The band is mostly young guys from LA who moved here because LA’s too harsh; and young girls from the Midwest, who moved here because Wisconsin isn’t harsh enough. However, the drummer is some random older dude who used to be in a band that totally opened for Rocket From the Crypt, like, all the time back in the day. Anyways, the band isn’t very good, but it makes you hungry, so, you stop at a Roberto’s for some late night sustenance. For reasons unknown even to yourself, you find the $7.25 carne asada burrito too expensive for your budget after chipping in for several rounds of $11 Sculpins, so you save $2 and get the shredded beef burrito instead. Eating that burrito, at some unreasonably late hour of the night, beneath the yellow humming glow of a sodium lamp, while some random dude’s stereo pumps Mexican banda music into the darkness, is where hipsterness begins.

If you’ve never experienced that same feeling, can you really even say you’ve hipstered?

Are there any noteworthy fallen hipster idols of whom we should be aware?

There are probably more fallen hipster idols than unfallen idols, because, at least in some way, to be a hipster idol is to herald your own fall. Notwithstanding that particular metatheory, some famous hipsters have fallen in spectacular fashion.

Garrison Keillor helped make NPR cool by paving the way for a generation of hipsters listening to countryfied podcasts and proudly crotcheting their own knitwear. Then he had to go be a terrible person.

Morrissey wrote and sang some of the best pop music of his generation, but every time that guy has opened his mouth since about 2002 I’ve had to turn up the volume on Meat is Murder to drown out whatever mean-spirited nonsense he sad to say.

There was that one time Michael Richards, aka Kramer in the infamous hipster doofus from Seinfeld, went on an insane racist rant. Nothing kicks your sense of self in the jimjams quite like seeing a veritable hipster god debase himself.

In the end, this is actually all for the best. When your heroes turn out to be monsters, or, more commonly, simple asshats, the great things they did before becoming total asshats take on a special significance. We can remember them as way better than they really were, sort of how we remember the 1980s, Crystal Pepsi, and Twin Peaks.

Shredded beef? Nah... Cali... and how does a so-called "hipster" need to save a couple bucks? Mama and Dada are just gonna send a check in the mail...