U-T strange ads: the doctor is in 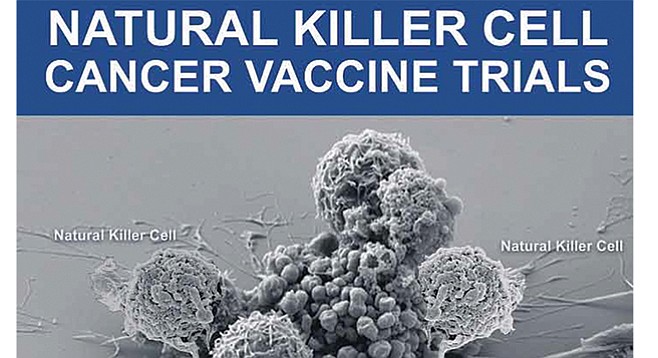 San Diego’s Union-Tribune, beset by plunging circulation and falling advertising, is filling its pages with display ads from a controversial new sponsor closely tied to billionaire Patrick Soon-Shiong, who acquired the struggling daily along with the Los Angeles Times last month for $500 million. The vacuum created by the demise of full page advertising from car dealers, appliance outlets, and big furniture stores, long staples of the newspaper, has been filled by solicitations for cancer victims to become test subjects in studies run by the Chan Soon-Shiong Institute for Medicine. Says the ad, which began running a week ago last Sunday and has since been appearing in daily half-page versions: “Now enrolling eligible patients with: Pancreatic Cancer, Head & Neck Cancer, Lung Cancer, Triple Negative Breast Cancer.”

Illustrated by close-ups of cancer cells and smiling couples, the advertisements say that the trials “aim to activate the immune system of the patient, combined with natural killer cell transfusion, to study the effectiveness of this novel immunotherapy.” Soon-Shiong opened his institute for medicine last summer in a building he owns in El Segundo, near what has now become Times headquarters, down the street from the training center for the L.A. Lakers basketball team, of which he is a four-percent owner.

The closeness of Soon-Shiong and the institute named for himself and wife, Michele B. Chan, was questioned in a July 20, 2017 post by STAT.com, an online publication run by the Boston Globe, which Soon-Shiong has tangled with in the past over questions about his research ethics. “The three doctors running the clinic are also employed by Soon-Shiong’s companies — the very companies that are selling the diagnostic and developing the drugs they will consider using on patients,” noted the piece. “Soon-Shiong’s arrangement stands out as highly unusual. Most drug companies don’t have their own employees setting up medical clinics to treat patients with therapies that are still being investigated.” A clinic spokesman replied, “Dr. Soon-Shiong always puts the best interest of the patient first. His decisions are and have always been guided by what is in the patients’ best interest.” 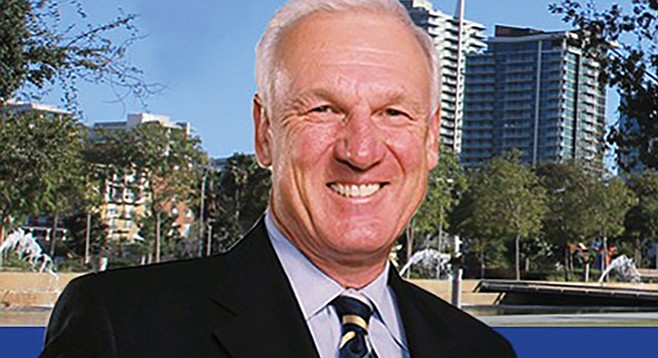 As they await the end of their final months in office, two termed-out San Diego County supervisors are dipping into the proceeds of their left-over reelection funds to pay for a few rounds of self-congratulatory travel and hospitality. The Fourth District’s Ron Roberts — whose succession battle is likely to become a nasty scramble between Republican-turned-Independent become Democrat Nathan Fletcher and ex-District Attorney Bonnie Dumanis — still has $47,524 squirreled away, for the first half of 2018, per his campaign disclosure. That was after he spent $18,764 during the period ending June 20, including a total of $15,609 for an April trip with an aide to China and Vietnam, where the pair hit the Hotel Nikko Saigon ($1240) and the Novotel Danang Premier Han River ($1080). Tickets on China Eastern Airlines cost the political fund $13,289.

First District Supervisor Greg Cox, termed out in 2020, stuck closer to home, spending $25,661 of his campaign money on a “reception for staff retirement event” at San Diego’s Wyndham Hotels and Resorts some time during the first half of the year. That left the fund with an ending cash balance of $38,594, per Cox’s July 24 filing. Dianne Jacob, also leaving office in 2020, exercised a tighter fist, spending just $1550 - $500 for the GOP Lincoln Club and $1000 for the “Summit for Stem Cell Foundation.” After collecting $3178 interest on her 2016 reelection account, Jacob ended the period with a handsome $507,530 remaining in the bank.

San Diego city councilwoman Myrtle Cole, who placed a surprising second after Monica Montgomery, an attorney with San Diego’s ACLU chapter, in June’s primary battle for Cole’s Fourth District seat, is rolling out some big guns from San Diego’s gay Democratic establishment to raise cash for the November run-off. An invite for an August 2 fundraising event headlines state senate leader Toni Atkins and Assembly majority whip Todd Gloria as “special guests,” along with Nicole Murray-Ramirez and ex-state senator Christine Kehoe, among others at the house of attorney Bruce Abrams. The cost of admission ranges from $75 to $550. Those who wish to roll higher can wait until August 16, when Gloria and fellow Assembly Democrat Shirley Weber throw a reelection funding bash for themselves in the Cox Communications Suite at Petco Park during a game between the Padres and Arizona Diamondbacks. A ticket costs $4000, in the form of $2000 for each of the candidates.

Most of the people I know would read a local paper with in-depth articles on local happenings. Cable news is filled with national and international news. Local TV news devotes only seconds to local stories. The UT is nothing more that bird cage liner owned/operated by an out-of-town owner and is produced in L A. "Yesterdays news Today!" should be their mantra. In my immediate neighborhood 28 out of 30 neighbors used to get the paper. Now only one gets the daily and one gets the Sunday rag.

Surely you're not saying that LATimes/U-T owner Dr. Patrick Soon-Shiong is running ads from his cancer research company in our hometown gazette equivalent in number and column-inches to lost ads from car dealers, appliance outlets and big furniture stores? That would mean the U-T had become a shopper for the Chan-Soon-Shiong Institute for Medicine! That would be wrong -- or maybe it would just be fashionably disruptive and new.