The defense attorney said of the accuser, “She lies.” Michael Jonathan C., 33, is now on trial, accused of assaulting his 48-year-old girlfriend two years ago.

Carlsbad police arrested C. the night of March 16, 2016, four hours after the alleged assault. Police reportedly found him in a parking lot, transferring items from a black BMW to a silver BMW parked next to it; both cars had the same license plate on the back of each car.

The 11-year-old daughter of the accuser had dialed 911 after “she witnessed her mother being assaulted,” according to prosecutor Marnie Layon.

In her opening statements to a jury on Wednesday, prosecutor Layon said that in year 2015, the alleged victim “found a way to make some money, as a single mother.” The woman did what she called “sensual massage,” and she posted sexually explicit photos of herself online to get clients for that “massage work,” the prosecutor said. The woman’s boyfriend, C., did not like that and they argued about it but, “She did what she felt she had to do, to make ends meet in her home,” Layon told the jury.

C. was never a “client” of his girlfriend, his accuser, the prosecutor said.

Two months before the alleged assault, in January 2016, boyfriend C. was arrested in Riverside for a probation violation. He and his girlfriend spoke often on the phone during the month he was in custody and “they had phone sex,” the prosecutor said. The accuser “really loved him,” they planned a future together, they wanted to get married, and she planned on having C.’s son — they even talked about naming that child Lucas. After C. was released from custody, she found a place for him to live in Vista, the jury was told.

The day of the alleged assault, C. wanted to visit his girlfriend at her Carlsbad apartment, but she told him “I have a client coming before I pick up my daughter at school, it’s not a good day,” the prosecutor told the jury.

That client, named Scott, did come to her home about 1 p.m. that day, and he brought a bottle of wine, the prosecutor said. The woman also “ate a marijuana edible.” Later, in her first statement to police, she admitted having sex with that client; but in all following statements she denied having sex with her “massage client,” the prosecutor said.

The woman failed to pick up her daughter at 2:20 p.m., and the 11-year-old girl phoned her mother and then the child got a ride home from the school crossing guard.

That child made one call to 911 in which her voice was calm, but in her second call to 911, the child was screaming — this after she arrived home and found C. naked and in a room with her mother, the jury was told.

Six months after “this horrific event,” the alleged victim was taking calls from C. in jail.

“She is lonely, she still loves him, and she misses him. She wants a why. She gets flirty,” the prosecutor told the jury.

Defense attorney Dan Segura told the jury, “The critical thing in this case is credibility. So you are going to hear from a lot of witnesses. What actually happened? You must determine credibility. Did he cause injuries to her? Was there intent to kill?”

C. is accused of dislocating his girlfriend’s leg out of the hip socket. And strangling her. The San Diego County Sheriff’s website describes C. as 5 feet 11 inches and 205 pounds. He has been in custody on a no-bail hold since his arrest more than two years ago.

“There will not be dispute, these two were in love,” the defense attorney claimed. Evidence will include recorded jail phone calls, the attorneys said.

The defense attorney said that since January of 2016, Child Protective Services was investigating the woman who is the alleged victim, regarding endangering her child. “She is told that people who continue to allow abusers in their home can get their children removed,” attorney Segura said. “She does not get a restraining order, even though CPS told her to get one.” The woman did not quit her relationship with C. “She did not call 911 herself, she does not call police. It was the 911 operator who asked her, did he rape you? Until that point, there was no accusation of rape at all.”

It was after police arrived that the woman claimed he showed up at her house and pushed his way in and he raped her, the defense attorney told the jury.

Who hurt the woman? Was it the client who just left? Was it the boyfriend who arrived moments later? The defense attorney seems to suggest it could have been the "massage client," but the woman did not want to admit that, and risk losing her daughter to Child Protective Services. A messy case. 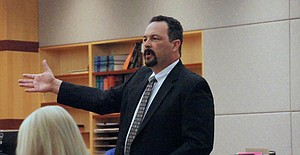 Defender Daniel Segura speaks to the jury. by Eva Knott

C, really? What was this clowns name before he changed it to C? Don't massage parlors give sensual massages? All a sensual massage is is one with a "happy ending". What a bunch of crap.

The jury deliberated carefully, considered the evidence, and found Michael Carabajal not guilty of certain charges and guilty of others.

Sentencing is set for June 11 2018 before honorable judge Richard Monroy, who heard trial. 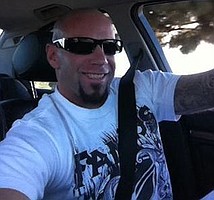 Michael Carabajal posted this selfie on Facebook. by Eva Knott

Michael Carabajal was sentenced to 14 years and 4 months in California State prison yesterday, June 11, 2018, according to the court clerk for judge Monroy. 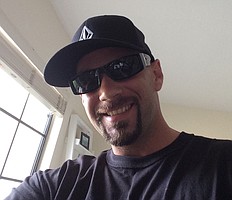