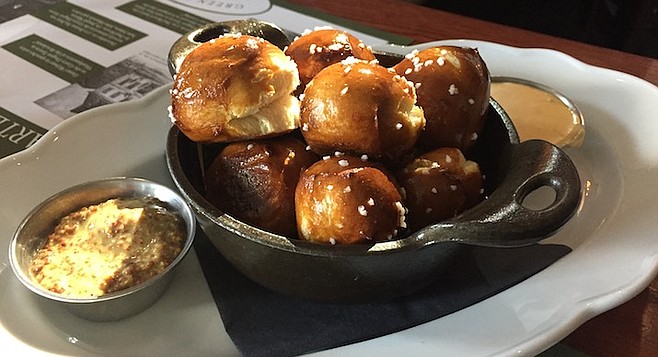 A year and a half ago I attended a special dining event at Green Dragon Tavern & Museum, and I’d been meaning to get back to sample from the regular menu. But, because it's all the way on the other side of the county, it took me a while (and a meeting even further north) to get there. There’s no better time to drive up the coast than Spring, or what I call “flower season,” especially when Carlsbad, land of the flower fields, is the destination.

In the middle of the day and week, the Green Dragon is tame. Most of our fellow diners looked like coworkers out for their lunch breaks. David, my perpetual plus-one, and I started with a cocktail and some pretzel bites. David was disappointed in his Old Fashioned ($9), and after having a sip, so was I. Despite the list of spirits, the default was apparently a harsh well whisky, and the garnishes were pub fare. Fortunately, my Blackberry Bourbon ($9) was a Barb-pleaser, and had it not been for the long drive back home, I probably would have had another. 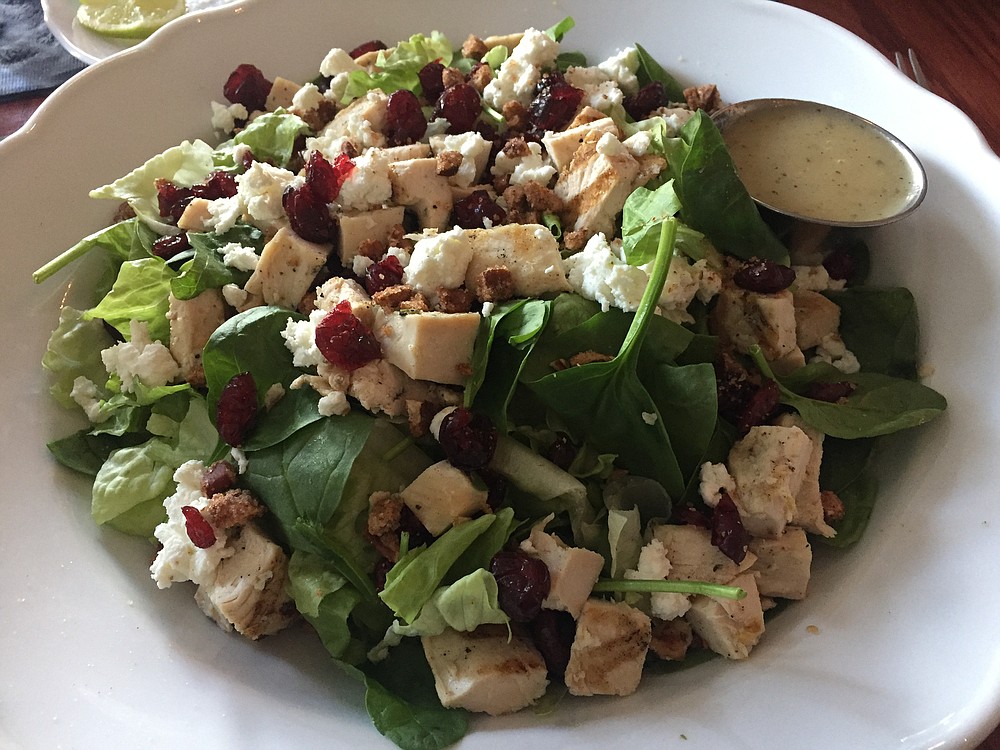 The pretzel bites were glorious. They were served piping hot, with a shiny, close-to-crisp crust surrounding fresh and soft dough. Served with a smoked porter mustard and jalapeño cheese sauce, each bite was so rich and satisfying we could have made a meal of them by ordering another batch. I’d go back just for a beer and some of those pretzel bites. 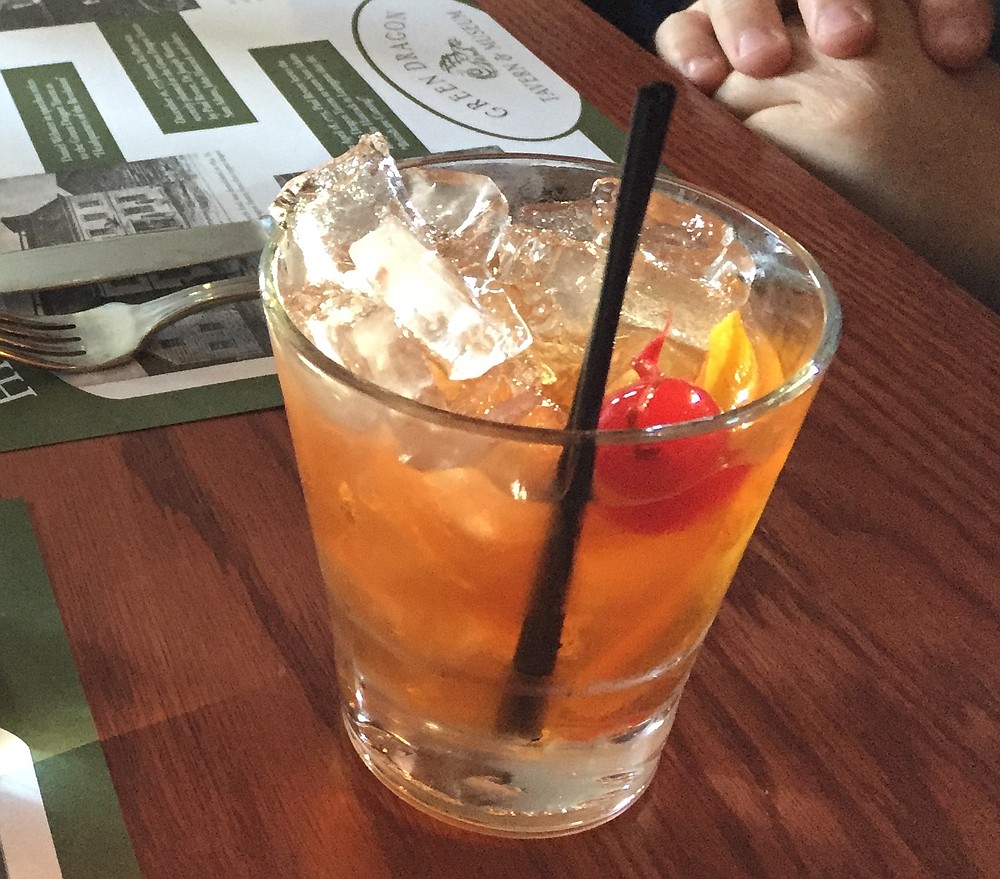 A disappointing version of a classic cocktail

If the pretzel bites were pleasurable, I’d have to describe the entrees as satisfactory. They just sort of “were.” I got the New England Chicken Salad ($14), a chop-style salad with grilled chicken breast, romaine, spinach, dried cranberry, goat cheese, and candied pecans served with a champagne vinaigrette. 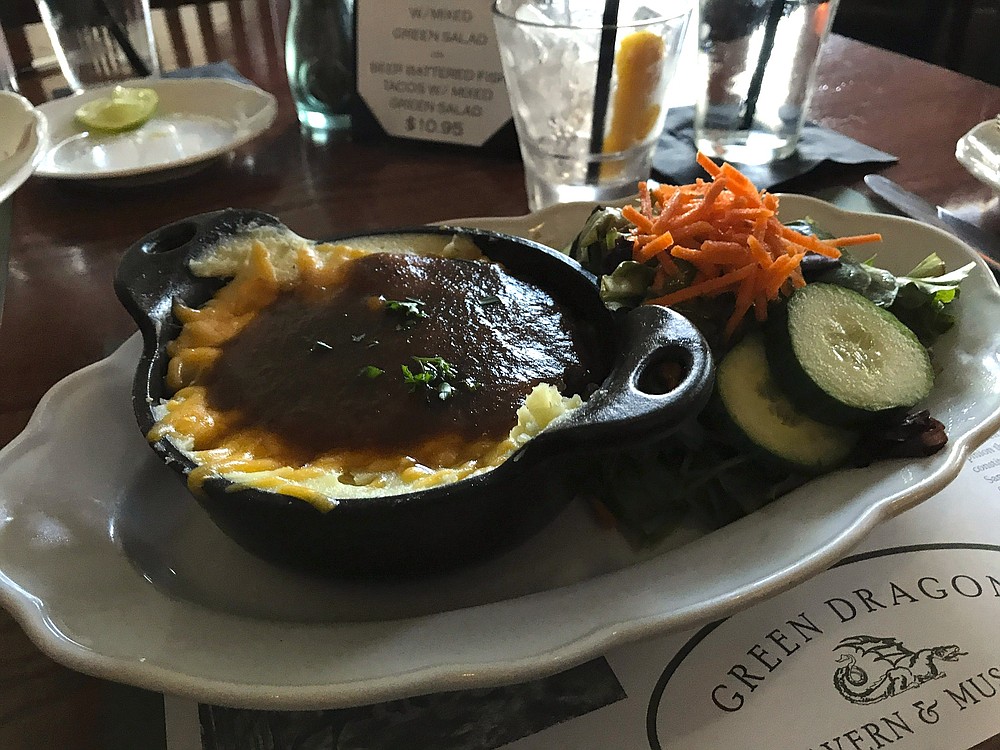 The vinaigrette was on the tart side, so I mostly did without that (and was glad to have asked for it on the side). The classic mixture of goat cheese, candied pecans, and cranberries was as earthy, creamy, chewy, sweet, and crunchy as you’d expect that to be, but the chicken was on the dry side. There seemed to be plenty of “there” there, and yet the whole experience of eating it was simply, “okay.”

David opted for the lunch special, Shepherd’s Pie with a green salad ($10.95), a smaller offering of the dinnertime Shepherd’s Pie dish. He found it mostly bland, but better with salt. After he’d finished and I asked how he’d enjoyed his meal, David shrugged, “It was okay.” Perhaps the problem was starting our meal with the pretzel bites. After that, everything was just meh.

There were several other items on the menu and dishes we saw at other tables that piqued our interest. We agreed we’d have to be back up to try them.