Local Dems and GOP beat back the edges 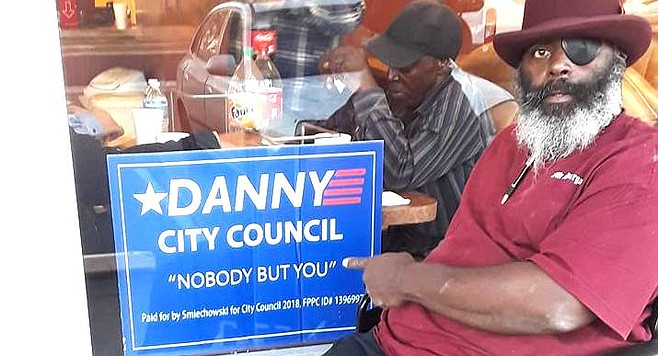 Clairemont resident Danny Smiechowski says he's being bullied by local Democrats and shunned by the media. He is an official candidate for San Diego city council in district 2. He’s running as a Democrat, but party insiders don’t want him. 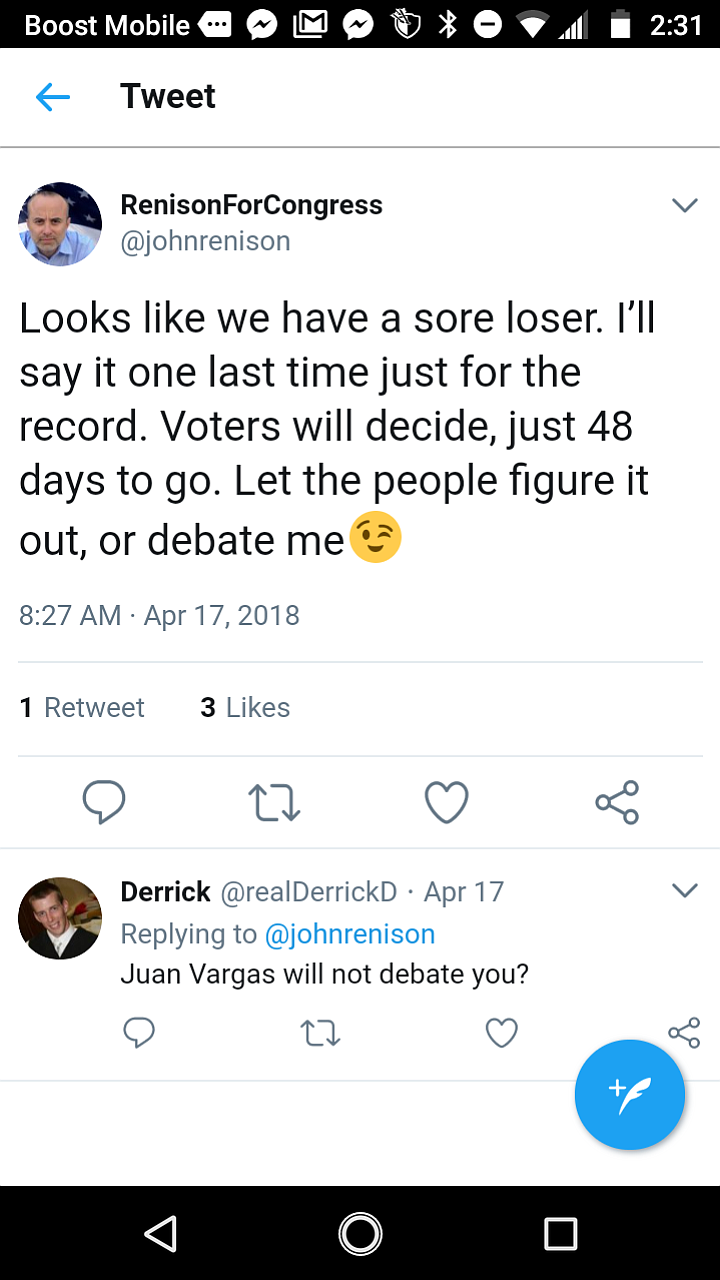 He believes he’s being targeted because he’s too truthful. Last month San Diego Free Press censored comments he posted on their site about Democratic party favoritism toward gay candidates. “Hillcrest rules local Dem politics. The fix is in,” he says. His comments received a backlash.

His fellow Democrats called him a “disgusting bigot” and “homophobic.” He says people started calling him a racist. He responds, “Why am I disgusting? I love gays! My best friend died of AIDS! I'm not hateful, just truthful.”

Smiechowski says his yard signs are being stolen. On social media activists tell him to get lost. He finds comfort in the homeless people supporting his campaign. He posted on Facebook: “Thank God I know my real friends.” 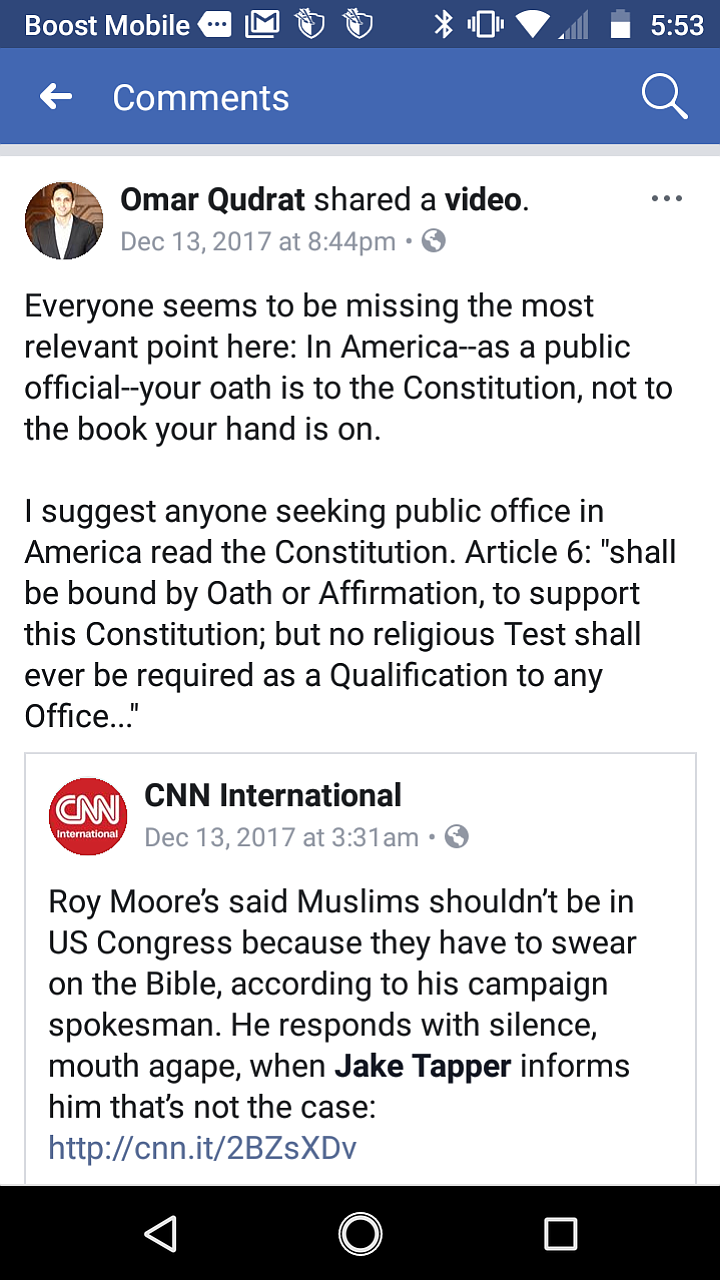 Omar Qudrat's view on the Constitution

Not to be outdone by Democrats, certain “bigots” in the local Republican party have been put on notice.

Ramona Tea Party member Woody Kirkman spoke out against the Republican party endorsement of Omar Qudrat, a 52nd Congressional district candidate who reportedly is a Muslim. 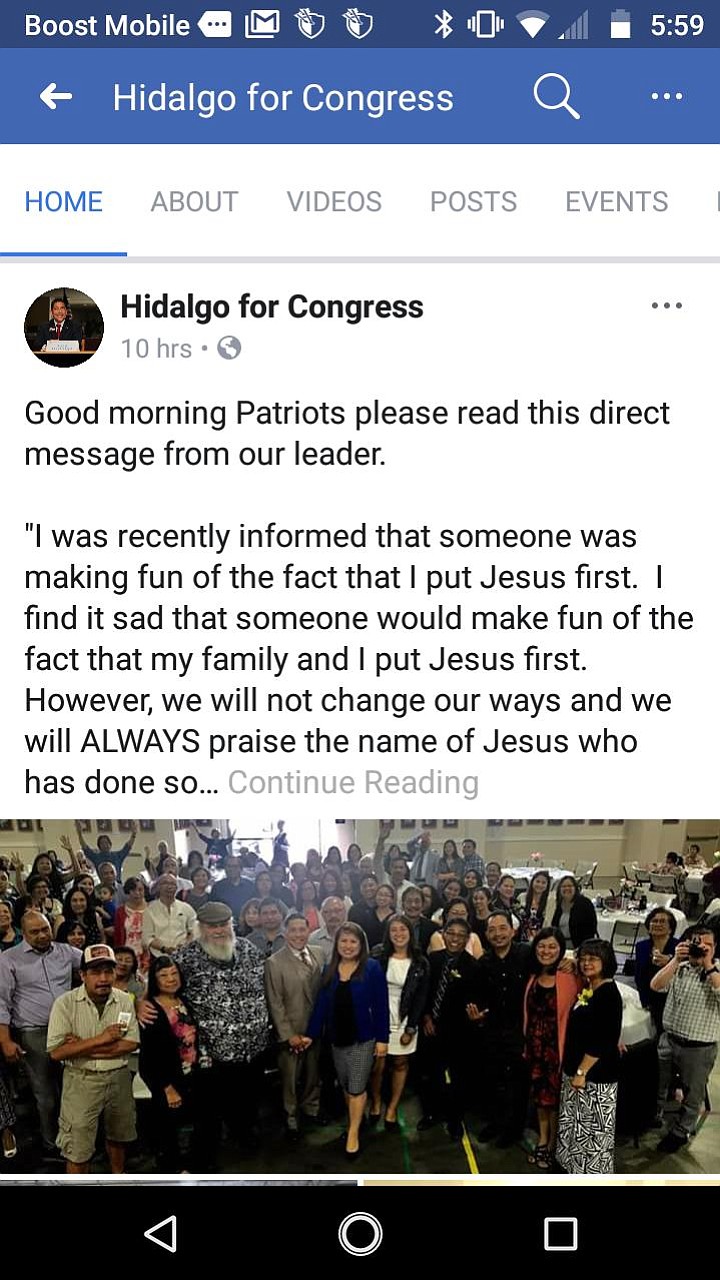 Intolerance towards Hidalgo's faith in Jesus

“I was dumbfounded when I heard the party endorsed Qudrat. If they were knowledgeable about Shariah law and its incompatibility with the Constitution, they would look at this differently,” Kirkman says.

In the second article SD Rostra published about Qudrat Republican Brian Brady praised Qudrat’s service to our country and condemned the rumors that he supports Shariah law.

Brady addressed “fringe characters” such as Kirkman who have opposed Qudrat because of religion. “There is no room in the conservative movement for you,” he stated. He told them bluntly, “Go to hell. We don’t want nor need your help.”

Brady also correlated the views of some “self-professed Christians” to the views of Islamofascists, saying they would both legislate by their religion instead of the Constitution.

Kirkman says he doesn’t know what Brady is talking about. He responds, “The Constitution is the Supreme law of the land. People are free to have whatever religion they want or don’t want. I’m not a member of a church because religion is a very personal thing to me.”

He adds, “I don’t see any incompatibility between the Constitution and the Bible. Islam teaches theocracy. The Bible does not.”

Brady says he has no problem with people’s concerns about Shariah, but has little patience for people who cannot take an American patriot’s answer at face value.

Brady believes Qudrat renounced Shariah law. Qudrat would not talk to the Reader about his religion but says people should not legitimize radical Islamic terrorists by “crowning” them with religious authority.

Kirkman says he was also dumbfounded when he heard the party endorsed John Renison over U.S. Marine Sgt. Maj. Juan Hidalgo in the 51st Congressional district race. Renison has dual citizenship in the U.S. and Mexico, which some local activists say presents a conflict of interest.

Renison says he was born a U.S. citizen and acquired Mexican citizenship in 2003 to help his business in Mexico. At one time he also agreed to put his name in as an alternate candidate for the Mexican Senate, but never actively campaigned for any office in Mexico.

He says he has nothing to hide and doesn’t mind people being informed of his history in Mexico. As a son of a Vietnam Veteran and a grandson of a World War II veteran what upsets him is that people are questioning his loyalty to the U.S.

Renison posted a video calling out people who question his loyalty. He says anyone who would damage his reputation without knowing him is a hater. “There is no room in the Republican party for such people. Meet me first. Get to know me,” he says.

Renison suspects one of his Republican opponents is behind the questions that are being raised about his loyalty. “Sounds like we have a sore loser,” Renison tweeted, referencing Hidalgo’s loss of the party endorsement. The information about Renison was actually being spread before the endorsement was made.

Like Qudrat, Hidalgo has experienced intolerance because of his religion. He issued a statement saying it will not deter him from following Jesus. In response to the sore loser accusation he says, “We’re not worried about these little silly things. We have a lot of important endorsements. We’re moving forward.”

While some say party endorsements are fixed, others say candidates earn them.

“It feels like we are in a sausage factory. Nobody really wants to know how the sausage is made,” says Republican central committee member Lincoln Pickard.

Alternate committee member Barry Jantz says, “Endorsements come down to a combination of philosophy, viability, relationships, and working for the votes. Toss it all in a bag and shake.”

In Smiechowski’s view people in both parties are liars and have “some dark agenda.”

This is a very funny story, outlining the ways Dems and Reps alike are in disarray this year, with self-important progressive journals censoring unconventional (if perennial) candidates and describing other unspeakable dustups.Thanks Eric Bartl.

Just curious? Hope you are not referring to perennial candidates as less than honorable as I know at least one being President Abraham Lincoln. Please refer to TR's most eloquent circa 1911 speech at my old school the "Sorbonne." "Man in the arena"

Certainly not "less than honorable," but definitely unconventional and definitely perennial. I think you have to own it.

Perhaps you have a valid point in "unconventional". As Churchill once said, "Never, never, never give up!" Considering as a former Ironman competitor, I have seen 99.99% of the American population giving up after 1/2 a mile, I suppose you are correct in that we are honestly a very conventional nation! God bless, Danny 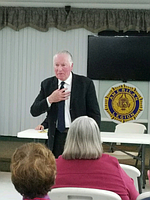 This is the reason that I would never live in the City of San Diego. What happened to people that wanted to represent all the people in their district?

Sir, My desire is to represent all people in my District! Danny

Sometime last year, the San Diego City Council voted on a religious organization moving into Mission Valley. What happened next should shock you. Despite the projects blessing from San Diego's planning department, at least two Council Members preferred a red herring approach by claiming foul facts. This appalls me as a candidate for City Council.

I remember my Father telling me what a Catholic priest had told him before shipping out in the Pacific during WWII. The priest said, "Teddy, you don't have to like anyone but must love everybody." Voting of elected officials has somewhat the same import in being objective, steady and without prejudice. Unfortunately for our society, we are living through a history of identity and protected class warfare where we all become losers. The greater whole is lost upon tribes and their respective political infighting.

This is unacceptable and as a candidate, I will not condone such intellectually dishonest acts of governance. When a religious organization comes before the San Diego City Council, it is outside government purview in considering personal beliefs of some church members. It is critical to stick to the facts in terms of land use, fiscal propriety and other pertinent neighborhood concerns but whether a congregator adheres to some religious belief is immaterial. There is evidence of this bias on the San Diego City Council. Scapegoating as a tactic in governance is totally unethical and must be curtailed. The use of red herrings in the public trust is at best shady and intellectually dishonest in that all votes ought to be cast without prejudice. My desire is to cast votes in clear harmony with truth, responsibility and in the public trust.

Noteworthy perhaps, is the view of America's philosopher John Dewey, who despite a childhood rearing in organized religion had become distanced from faith throughout his career yet remained steady in his belief of religion as a pacifier within our human condition. My personal belief as a candidate is to stick with land use, fiscal responsibility, neighborhood desires and not to second guess a few folks social beliefs. I'll let the first amendment to the United States Constitution do it's job.