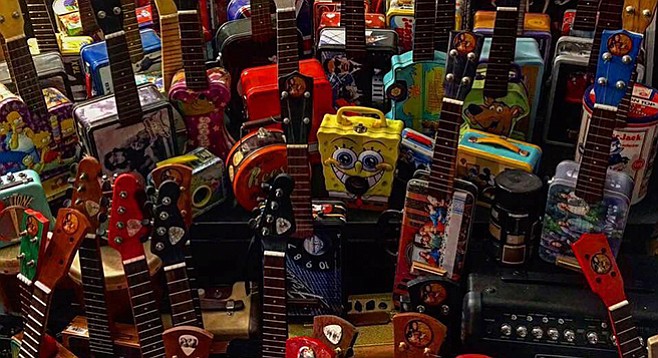 Ray Masters, aka Ukulele Ray, Fender’s first sponsored ukulele artist and inventor of the lunchbox uke, passed away unexpectedly this week. A comedian and singer/songwriter with over a dozen album releases, he was known for covering everything from rock to reggae and country, as well as a Las Vegas musical/comedy/burlesque revue known as Ukapalooza. He was featured in a March 16 Reader article, "The easiest instrument in the world to play." 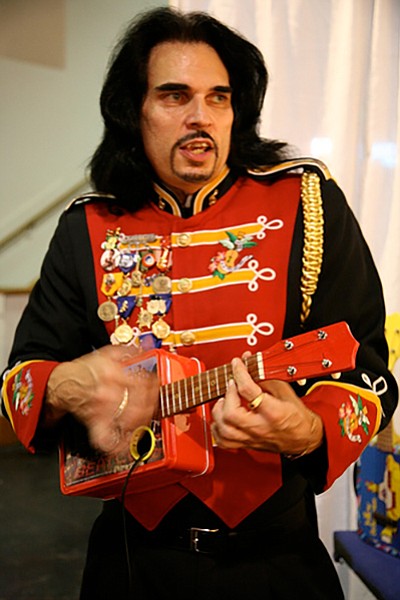 “I would not be Ukulele Ray had it not been for George Harrison, who came to my home to view my ukulele collection."

As a ukulele builder, Ray created the Lunchbox-A-Lele (combo ukulele and lunchbox) and the Warhol Soup-A-Lele (uke made from a Campbell's Soup can), which have been displayed in art gallery and museum exhibits around the world.

"I've been creating and building cigar box ukuleles since 1981, when I was 21," he told the Reader. "It wasn't until 2001 when I was inspired to create a ukulele from a tin lunchbox. As a San Francisco native and street musician and artist, I entertained around the wharf area, between Pier 39 and Ghirardelli Square, and began to perform on my creations, as well as sell them on the streets. This brought me a tremendous amount of publicity with articles in the San Francisco Chronicle and local TV news and talk show appearances."

Ray was able to parlay all the press into a 2010 Las Vegas showcase, Ukapalooza, a musical/comedy/burlesque revue featuring Ukulele Ray & the American Pinup Girls that ran for six months at Tony Sacca's Las Vegas Rocks Café on Fremont Street. "The show closed when the Las Vegas economy took a huge nose-dive that year. The show featured me doing songs saluting the American Pinup Girl from each decade, from the 1920s to present, like a hula girl, sailor pinup, bobbysoxer pinup, hippie girl, that kind of thing, along with my comedy and impersonations from celebrities of the day."

The production ended up being his swan song in Vegas. "I came to Escondido after closing my Las Vegas show at the encouragement of my girlfriend and manager, Olivia Tosic, who felt that she could best manage my career from here, seeking bookings and engagements with Southern California as my homebase."

After arriving in San Diego (where he first resided during Navy boot camp in 1980), Ray began teaching ukulele seminars and workshops and donating ukuleles to school programs and children's hospitals through his Ukulele Ray Foundation. "San Diego, being a coastal city, with influences and elements of tropical culture all around, is a ukulele hub, with large, local ukulele clubs all over the county, boasting memberships into the 1,000s, collectively."

The author of the Hal Leonard music book Ukulele for Guitar Players, Ray points out that "Ukulele was the first instrument for a number of legendary artists, including Jimi Hendrix, Johnny Winter, Dick Dale and others."

"It was also the first instrument picked up by George Harrison. I would not be Ukulele Ray had it not been for George, who came to my home to view my ukulele collection, and inspired and encouraged me to be a steward to the ukulele to help play it forward. This is the reason why I don the Sgt. Pepper motif, in honor and memory of George.”

A Celebration of Ukulele Ray's Life will be held May 6 at the American Legion Post in Escondido, from 1-6pm. Attendees are invited to pay tribute to both Ray and Harrison by wearing their own Sgt. Pepper jackets.