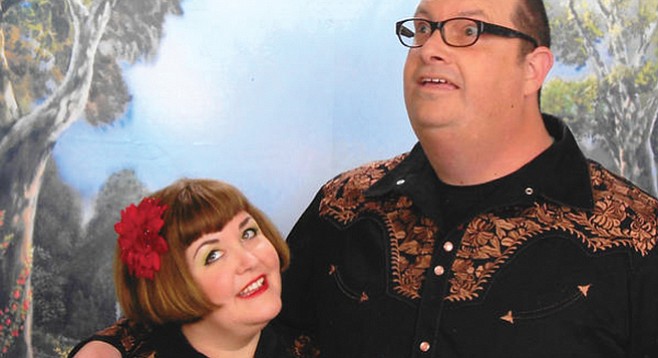 “The moment we heard them, we loved them,” says Jaye MacAskill, one half of local comedic rock duo Pony Death Ride, of why she and her husband Joe arranged to bring Arizona's the Exbats to San Diego. “I like their punk rock devil-may-care attitude. As a duo, they do a lot with very little.”

The Exbats specialize in a Saturday morning cartoon sound drenched in pop culture references, which carry over to titles, lyrics, sleeve art, and video promos. Their debut album, A Guide to the Health Issues Affecting Rescue Hens, was named after a book they discovered from Googling “Exbats,” while the title of their sophomore release, I Got the Hots for Charlie Watts, references the ancient drummer of the Rolling Stones. The latter effort, released in January, has already yielded Spotify party faves like “Kill Yr Boyfriend,” named after a Grant Morrison comic book, and “Mr. Bucky,” a perverted ode to adolescent sex comedies.

Young drummer-singer Inez McLain, not yet old enough to drink in most bars that book them, was supposedly christened by her Monkees-fan mom after a nickname for Mike Nesmith (a Monkees album is briefly seen in their video for “Iolaus,” paying tribute to the Kevin Sorbo TV series). Her dad, singer-guitarist Ken Mclain, clearly shares her love of cultural kitsch, and it helps that he seems to have no problem standing next to his daughter onstage as she screams into the mic “I wanna fuck Mr. Bucky, and you do too, don’t lie it, wouldn’t be yucky at all.”

The Exbats and Pony Death Ride will share a Casbah bill on Monday, April 23. “We were proactive, we contacted [promoter] Tim Pyles and told him we had a band people will love, and we wanted to do a show with that band,” says Joe. “Then we asked the band, and they were stoked. It feels nice to get in touch with a band and say 'Hey, we like you. We want people here to see you play and maybe make this a place to play regularly.' Bands don't hook each other up like that much any more.”

The Casbah date marks a rare milestone for Pony Death Ride. “It’s our first show with a drummer [Mike Kamoo] in seven years, and only our second time ever,” says Joe of PDR’s rare full-band set.

“Most of the time, we don't miss a drummer," says Jaye. “We like having an easy setup and takedown, and we don't have to share the money.”

“It's also nice avoiding that guilt you feel when you give the drummer his cut of the show money, and lie to him about how much you really made,” adds Joe. “And we talked to all 273 drummers in the Reader's Local Music Database. Nobody called us back.”

As for a setlist, Joe promises “We’ll start with a couple ukulele ditties, then launch into our punk stuff, songs we’ve never played live. We’ll play ‘Let Me Tell You ‘Bout My Bike,’ the song we recorded last year with the Schizophonics and Jason Hanna; they’ll all be joining us onstage for that number. And we’ll debut a new song called ‘Crispin Glover, Be My Lover.’” Also expect tracks from their most recent full-length, Cat Sounds, such as “I'm a Cat Guy,” “Your Cats Are Crap” and “Grumpy Cat (Ain’t All That).”

"When we perform as a duo, we need to crowd to be quiet to catch the jokes and subtle humor," says Joe. "It's gonna be nice to just crank it up and go nuts!"

Thanks to the MacAskills, the Exbats will have a place to crash after the show. “We’re hosting them at our house, ‘cause that’s rock and roll,” says Jaye. “We hope they like our cats, because cats are also rock and roll.”

That is such a wonderful wonderful photo. I'm cracking up at my desk.