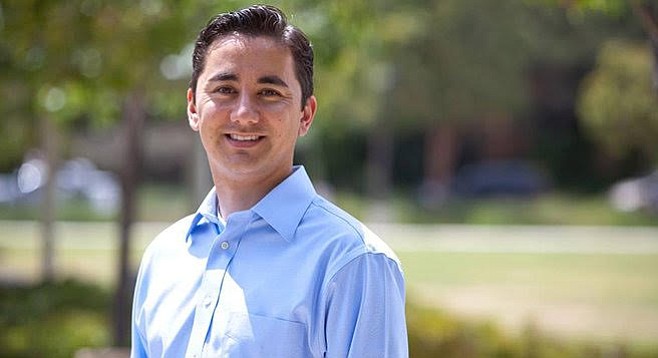 With investigators of the California Attorney General's office still looking into his leak of a confidential memo to lobbyist contributors, San Diego city councilman Chris Cate has agreed to pay yet another fine for breaking campaign law.

Per a stipulated agreement with the ethics commission, the Republican's 2018 reelection committee "sent a campaign email to a list of approximately 9,000 recipients that included 60 City employees (at their sandiego.gov email addresses)."

The February 7 email "included a solicitation for campaign contributions in the form of a 'Donate to my Campaign' button near the end of the message, which was linked to the Committee’s campaign donation page."

The April 12 stipulation says that "the majority of the recipients were included on a campaign list generated in connection with the 2014 election cycle." Cate maintained that an unidentified representative "incorrectly assumed" that the solicitation list "had been previously combed to remove City employee email addresses," according to the document.

In levying a $1500 fine, the stipulation gave Cate redemption points for ineptitude. "Respondent's claim that the inclusion of City employees in the distribution list was inadvertent is supported by the fact the Executive Director of the Ethics Commission was one of the City employees who received the email."

Cate's "opinion-gate" case — in which he has admitted leaking a confidential June 15, 2017, legal document from the city attorney's office to his campaign contributors and SoccerCity lobbyists Craig Benedetto and Ben Haddad - had already cost him a $5,000 ethics penalty, imposed by the commission in December of last year.

“I agreed to pay a fine to put the matter to rest,” said Cate at the time. "While the city attorney did not introduce the Soccer City memo in closed session, it became clear she did intend it as privileged information.”

The state attorney general's office which has yet to issue its findings in the matter, entered the case after District Attorney Summer Stephan recused herself from the investigation following an October 13, 2017 report here that she and Cate both employed Republican campaign guru Jason Roe's Revolvis consulting outfit.

Everyone one knows “combing” merely rearranges while culling removes. If Mr. Cate or is staff is just combing through these lists they have no intention of removing anything or anyone. Honestly, what politician removes names of potential source of free money to feed their campaign? But every politician hates getting caught!

So when is this sleazebucket councilmember going to resign?

Their all sleazebuckets, city, state and federal. When are their pensions going to be taken away and replaced with 401k 's?

The only real qualification San Diego politicians and city administrators are required to have is ... sleazebucket-ness. Without enough sleaze, the good ones are filtered out, and the people are always dumped on with whatever slimy, goofy eight-balls are left over. And it's costing the people millions upon millions - money wasted on incompetence, money that should have gone to infrastructure improvements and a higher quality of living.

Potholes get deeper. The homeless population grows. Professional sports teams and fans find better stomping grounds in healthier regions. Glaring planning mistakes are made that cause serious business people to relocate. Technology companies turn away. For a city like San Diego to consistently thrive, competent workers are required at every level, not the city workers you see everywhere who spend most of their days driving around in their city vehicles, looking and chatting about what needs to be done by someone else, but real workers who plan and remain organized and complete the work they know they should be doing, the work they're being paid to do.

Why would anyone in their right mind vote for this clown again ?