Who can save San Diego's airport from drowning? 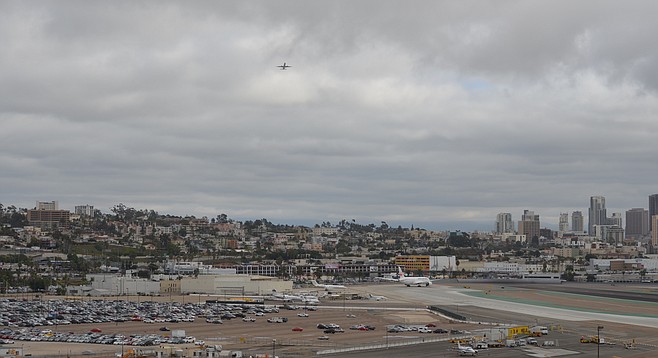 There is a “very real threat of sea level rise that could leave our airport literally under water,” stated Assemblywoman Lorena Gonzalez Fletcher (CA-80) in a March 30 Union Tribune commentary.

Gonzalez Fletcher wants to take San Diego airport control away from the county's Airport Authority and give it to the Port of San Diego, which she says will do a better job keeping the airport above water.

A 2014 report from the California State Assembly Select Committee on Sea Level Rise projected sea level rise will impact access to the airport on Harbor Drive by the year 2050. The projection for the year 2100 puts Harbor Drive and airport runways and taxiways under water.

Assembly Bill 3119 (San Diego Unified Port District consolidation) is scheduled for a hearing in the Local Government Committee on April 25.

Airport Authority board chair April Boling told me the board adopted a position opposing the assembly bill at their April 5 meeting.

Responding to a statement Gonzalez Fletcher made about the board being stacked with representatives from east and north county Boling said she isn’t aware of any concerns brought to the Airport Authority Board by representatives of the city of San Diego that were overruled by board members from other parts of the county.

Boling explained what her group has been doing to address sea level rise. In 2012 the Airport Authority worked with port cities and the Port of San Diego to develop the Sea Level Rise Adaptation Strategy for San Diego Bay.

In 2015 “hydrological and hydraulic modeling tools” were used to analyze future flooding scenarios on the airport’s 661-acre site. The Airport Authority has implemented storm water containment plans in the rental car center and in their plans for the new Terminal 2 parking lot to reduce the amount of storm water that would need to drain into the bay.

The more sea levels rise, the harder it will be to prevent airport flooding during storm events. As it is, when the tide rises in San Diego Bay water travels into the airport’s storm water drain system.

The Union-Tribune published a counter-commentary from Boling on March 30: “An asset as important to the regional economy as the airport should be managed by an entity solely focused on its success.”

A spokesperson for the Port said they have no comment on the assembly bill but are working on an evaluation plan that will be completed by June 30, 2019.

The Port and the U.S. Navy are working together on an Integrated Natural Resource Management Plan,on climate change in San Diego Bay.

The Port and the Airport Authority have staff serving on the steering committee of the San Diego Regional Climate Collaborative, which focuses on planning for the impact of climate change in the region.

Former Lemon Grove mayor and former East County representative on the Airport Authority Board Mary Sessom has been outspoken in opposition to the state bill.

She gives most of the same reasons as Boling but adds, “When the airport was under the Port Authority, airport money was used for non-airport purposes. If any federal money is involved, that is not okay. The FAA had to help the Port see where the line was on proper expenditures. A little hand smacking seemed to work.”

Sessom says the battle brewing over airport governance will fall on regional rather than party lines, Port-cities v. non-Port cities. However, one Port-city based publisher decided to speak out against folding the Airport Authority into the Port.

La Prensa is based in the Barrio Logan neighborhood of San Diego. Its publisher wrote an editorial on March 16 and stated, “Fighting for smaller government is usually a good thing, but not when it comes at the cost of limiting the representation of millions of San Diego County residents in decisions affecting our region’s largest airport.”

I contacted every city mayor in the county to ask their position on the bill. For the time being most of them seem to be on the sideline. A few said my inquiry was the first time the bill came on their radar.

El Cajon Mayor Bill Wells spoke up, “This is just like AB 805, a thinly veiled takeover plot designed to give unions a continuous flow of government cash.”

Carlsbad Mayor Matt Hall echoed Wells’ dissatisfaction with the outcome of Gonzalez Fletcher’s AB 805. He said it has not been beneficial to Carlsbad. Regarding AB 3119 Hall said, “Any time the state legislature gets involved in local land use or local control it’s not a good thing.”

One more grandstand play by lovely Lorena. Doesn't she have better things to do than introduce yet another bill in the loopy legislature?

The county's Airport Authority and the Port of San Diego are made up of political appointees who serve the interests of those who appointed them. Most are just political hacks sucking off the taxpayer and doing nothing.