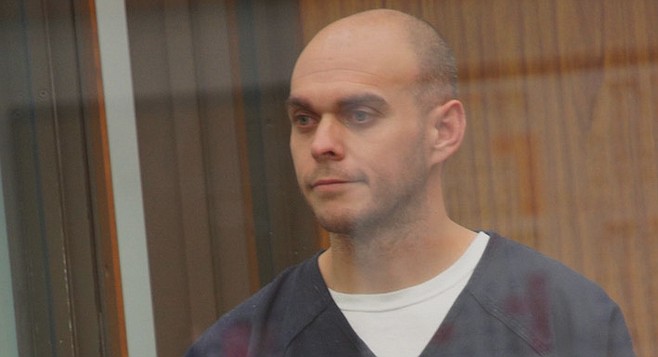 A Carlsbad police officer who was arrested on suspicion of two felonies, first-degree burglary and stalking, was ordered released from custody on April 11. Instead of the felony charges, Jeffry Edwards, 37, was instead arraigned on one misdemeanor count of “aggravated trespassing.”

A prosecutor said that Edwards dated a certain female for one year, and after she ended their relationship, he went to her home in Oceanside. Edwards reportedly opened a window to the woman’s bedroom, but her new boyfriend was sleeping there, and when that man asked “What was going on?” the intruder fled, a prosecutor alleged in court yesterday.

The prosecutor remarked that the charge against the defendant could change again, after a more complete review of evidence.

Edwards was represented by the public defender’s office Wednesday when he pleaded not guilty to the one charge. The defense attorney told the judge that the 37-year-old man “already served 18 years for our country” and “he has a home here” and no criminal record.

Honorable judge Robert Dahlquist was persuaded to release Edwards on his own recognizance. The judge issued a protection order for a named woman.

Oceanside police arrested Edwards for burglarizing a home in the 3500 block of Windrift Way,where his ex-girlfriend lived. “It was determined that Edwards had been stalking the victim,” according to officer Tom Bussey, of the Oceanside police. Bussey stated that Edwards was found in San Clemente and taken into custody about 8:15 p.m. on April 6, “without incident.”

The accused cop was held in custody in San Diego’s downtown central jail since his arrest last Friday, in lieu of $500,000 bail. It is likely that Edwards would be sentenced to “time served” if he is eventually found guilty of one misdemeanor.

This is a strange series of events. Cops actually came down hard on one of "their own." One PD asks another PD to arrest a member of a third PD. Very strange, and stranger still is that it apparently took only one incident to get the ball rolling. Let's recall this recent case involving a SD Sheriffs deputy who had over a dozen accusers before he was arrested and charged. (That case has yet to be tried.)

But now the DA is pulling back on the seriousness of the charges, and that was predictable, sad to say. I would be curious to know what the defense attorney was talking about when he referred to the defendant having "already served 18 years for our country" when he is 37 years old.

Jeffry Edwards dismissed his public defender and now has Peter Liss as his private counsel. Edwards is next due in court on May 31, to confirm a misdemeanor trial date of June 27, in San Diego's North County Superior Courthouse. Notes in Edward's criminal file indicate there is body-camera footage from police officers; his attorney is trying to suppress dissemination of that video footage.

Edwards in court. Photo by Eva by Eva Knott