Craft spirits for a West Coast palate in Vista 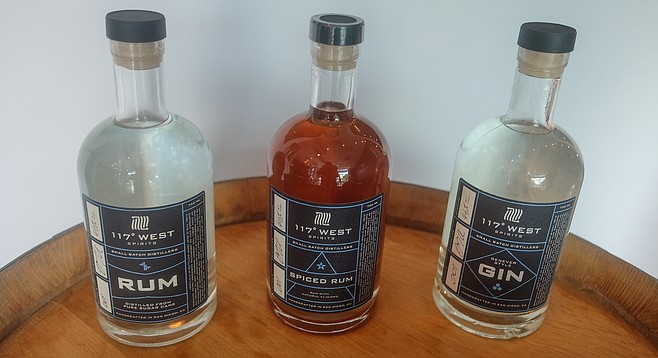 Back in 2012, decorated Tennessee distiller Darek Bell published the book Alt Whiskey, which offered recipes and techniques for distilling craft beer into nontraditional whiskies, including the addition of hops.

“It got my brain working,” says Justin McCabe. The 20 year homebrewer had always imagined opening a brewery someday. But McCabe’s also a PhD chemist, and realized it was a short leap to combine his areas of interest to become a craft distiller. “I understood distillation perfectly well through my chemistry experience,” he reckoned, and distilling offered a lot more room for innovation. “Why would I open a brewery when there’s a 150 some odd breweries in San Diego?” he figures, “The craft spirits world is still growing.”

McCabe teamed up with friends Eric Buchanan and Archie Kasten to open 117˚ West Spirits in the craft beer district of south Vista (which sits along the 117th western longitudinal meridian). Since its December opening, 117 West has yet to bottle any of the bourbons, ryes, or single malt whiskies it has gestating in oak barrels. In the meantime, the partners have been pouring rum and gin in their tasting room.

But it’s the gin that openly introduces a craft beer influence. McCabe based it off a historical style, the gin precursor, jenever. Dutch for juniper, a jenever was distilled from a fermented malt beverage. However, due to crude technique, it was flavored with juniper berries to obscure undesirable flavors.

The English eventually switched to a non-grain spirit because it was cheaper. But they kept the juniper, and shortened the spirit’s name to gin. McCabe’s gin returns to its malt beverage roots. However, he points out, “It’s contemporary in the sense that we’re using west coast ingredients: like hibiscus and white sage.”

And hops. Specifically, citra hops. “The hops I would call a West Coast ingredient,” McCabe adds.

Gin is made with a gin basket, a still add-on that runs spirit vapor through a tube filled with botanicals for a clean herbal infusion. McCabe added a mix of pellet and whole cone hops along with the other ingredients, extracting their aromatics, but not their bitterness.

It’s the same process he’s used to craft batches of hopped whiskies. McCabe’s craft beer recipe goes into a 100 gallon still, including a hop-loaded gin basket, then sits in an oak barrel until ready for release.

The first release should be soon, as McCabe thinks 117 West’s first rye whiskey is just about ready. Dubbed Cherya, it’s made from a Cherrywood smoked rye IPA, and hopped with opal and mosaic hops.