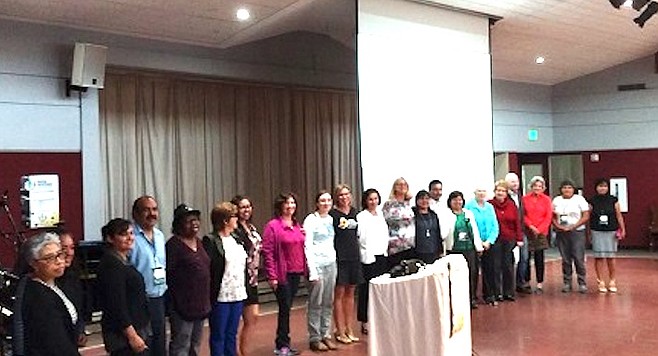 A little over three months after launching a volunteer-driven campaign to shield undocumented San Diegans from immigration action and assist those caught up in raids, the San Diego Rapid Response Network held its second official meeting with an aim to spread awareness of its activities into North County. 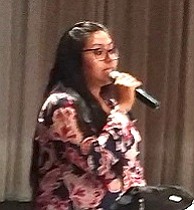 Katia Ortiz: "We can provide a place to sleep if they don't feel safe in their home."

"We're still in the process of disseminating information as far and wide as we can – tonight we're in southern North County, where we haven't met with the community yet," explained Caroline Theiss-Aird, who volunteers with the North County Immigration Task Force and serves as a network responder.

As we talked before the Thursday night (April 5) meeting, people began to fill the meeting hall at St. James Catholic Church in Solana Beach. Though occupying prime "west of I-5" real estate, the adjacent neighborhood of Eden Gardens, a historically Hispanic community plays host to some of the north coast's last remaining moderately-affordable housing. Chairs were set out to accommodate an audience of 120, by the time the presentation started, dozens more would be standing in the back.

The network so far has been called into action once, when a series of Immigration and Customs Enforcement raids coincided with a visit from President Trump last month, who was in town to review several models for his proposed border wall.

"On March 13 and 14, there was a large ICE action. I believe it was timed to coincide with the president's visit to the wall. Over 100 families were impacted, Many of those were in North County," Theiss-Aird continued. "70 percent of these people had no criminal record."

About two dozen families contacted the network which, though it has fielded about 800 calls since December, was faced with its first major action.

"A lot of people were released with ankle monitors, but they do face deportation proceedings. And part of our job is to link those people to legal services so they have some form of defense; in a regular criminal trial, people have the right to an attorney whether they can afford one or not, but that's not the case with immigration law."

Once the crowd, including dozens of children and the occasional adult munching on Mexican pastries from a buffet table, had settled, Katia Ortiz delivered a rundown on the group's status. Ortiz works with the San Diego Organizing Project, one of the network's member organizations, and is a Dreamer, brought to the US as a young child by undocumented parents and until recently enjoying protection under the Deferred Action for Childhood Arrivals program.

In addition to fielding hundreds of phone calls, Ortiz said that about 80 volunteers had been trained either as responders like Theiss-Aird or as dispatchers handling incoming calls to the hotline. While the group tries to connect those facing deportation with legal aid, she said a large part of the group's mission was handling more mundane tasks.

"We're assisting victims and their families with basic needs," Ortiz told the crowd. "For example, if a spouse [of someone captured in a raid] needs a ride, or if the kids need to get to school, we're there. We can provide a place to sleep if they don't feel safe in their home, we just want to make affected people in the community feel like there's somebody there for them."