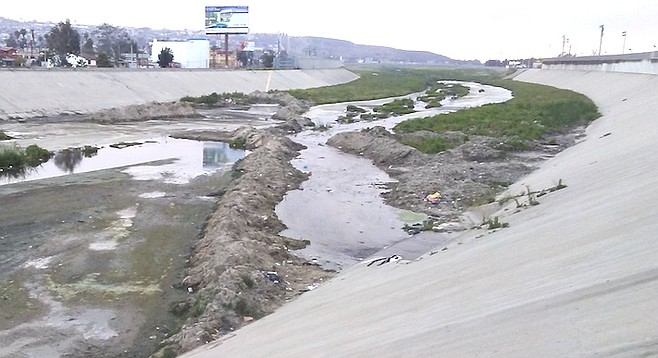 Following a model created more than 30 years ago by former Imperial Beach mayor Brian Bilbray on top of a bulldozer, crews from the International Boundary and Water Commission pushed up an earthen berm at the end of the concrete channel containing the Tijuana River. 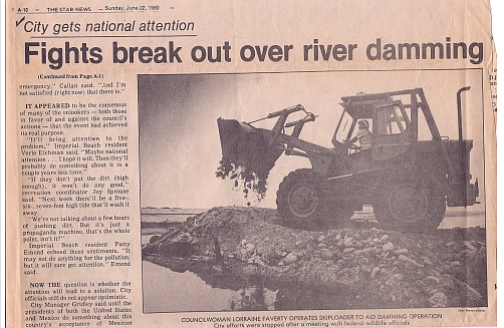 The famous Bilbray bulldozer, in a June, 1980 Star News clipping.

Though the berm has been in place for a few days, the commission announced it Wednesday, April 4, saying "these berms will allow the temporary storage of any flows exceeding the capacity of [Mexican] Pump Stations." 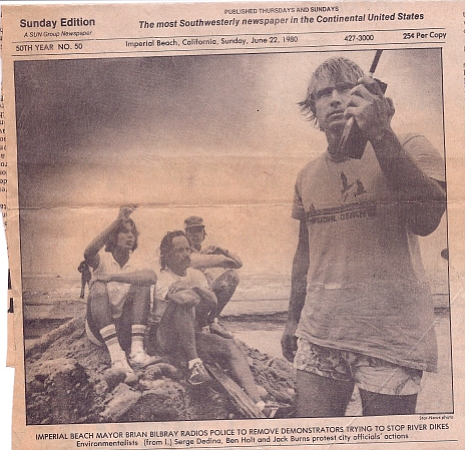 The pump station in Mexico has been the cause of some of the cross border flows — certainly the largest of them. Intended to divert water — usually storm water run-off — to the international commission's sewage plant, it can handle at best a modest flow. Mexican water authorities shut it down so it isn't destroyed when large amounts of flow come through. 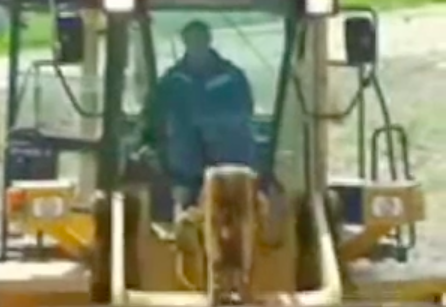 The bulldozer shows up at beginning of ad

It was apparently shut down in February 2017 when a broken sewer main collapsed. For days workers in Tijuana tried to repair the broken main. Raw sewage estimated in the hundreds of millions of gallons rushed into the channel in the Tijuana River Valley before it reached the ocean. The sewage fouled beaches from the border to Coronado.

It's not clear that the three-foot- to four-foot-tall berm could contain that much sewage or stormwater — or what amount it could contain. "It's a start and it's about time," said David Gibson of the region's Water Quality Control Board. Frustration led one local environmental official to observe that maybe Bilbray had it right when he went out there with a bulldozer — an event that occurred in 1980 when he was the mayor of Imperial Beach. Ten years later when Bilbray headed into the river valley with a bulldozer again, he was blocked by a group of protestors that included the current mayor, Serge Dedina. A November 14, 1990 L.A.Times story shows two different takes on the same event — Serge Dedina recounting that Bilbray was out to flood the estuary and destroy it, while Bilbray's account is about keeping garbage out of Imperial Beach.

Is the berm is in the U.S. or Mexico? Seen down a steep concrete bank, it appears to be perhaps a tenth of a mile east of an area referred to as Whiskey 4, where a mob gathered in Tijuana and rushed across the painted yellow line that marks the border. Border patrol agents turned back the mob which was heaving rocks and bottles back south with pepperballs and other less lethal weapons. Gibson said he doesn't know if the water board will have jurisdiction over it, as they do over the commission's sewage treatment plant that will treat whatever liquid is captured. "We are assuming it is n Mexico or in the federal land area where they Department of Homeland Security obtained a waiver of environmental," Gibson said. "We are glad they are stopping the flow. We will work with them on the details if so asked." The berm is temporary, and the commission is planning for a more durable berm to be constructed, sources say.