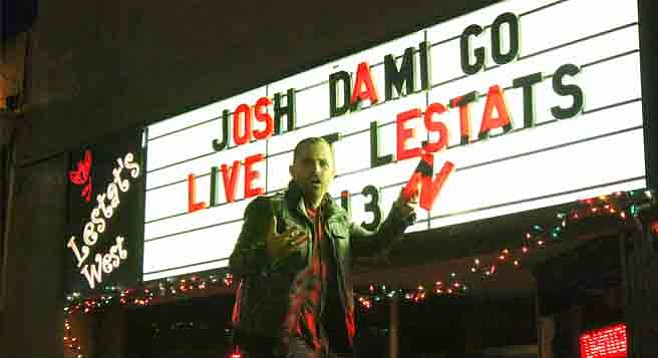 San Diego’s premier acoustic music venue for the last 15 years is closing and it’s not ending on a happy note. The music showcase Lestat’s in Normal Heights is closing. The adjacent coffee house will remain open.

The success of the Lestat’s showcase is often attributed to venue manager/sound mixer/talent buyer Louie Brazier who ranted in a recent Facebook post: “There is nowhere else that would give new bands or local talent the chance other than us. We are the lifeblood of up-and-coming producers and musicians. But when the owner’s direction and focus becomes about numbers, their answer is to find another band with a larger following. This means that professional bands get run out of the joint in favor of whoever can bring in the most people... the goal should be to build a fan base of the venue to get people that will that will trust that you will have good music in there every night. Instead you’ve soiled your reputation for a quick fix.”

Both owner John Husler and Brazier declined to comment.

“Their open mic was the highlight of my week,” says singer/songwriter Josh Damigo, who has released several albums including Live at Lestat’s. “If you did good in the ten minutes you got, you might get a show out of it. That was the best feeling in the world. I met some of my best friends there. There was a time when getting my picture on their wall of fame was pretty much my only career goal.”

Damigo says he didn’t know the room’s legal capacity, “But once they had 200 people in there to see Tyler Hilton. I think he had the record. Nickleback and Alanis Morissette’s band played there. All kinds of Grammy winners have been there.

“Back when Twigg’s was open, those two were the center of the universe for the local acoustic scene,” Damigo says. “When Twigg’s closed in 2008, it was all about Lestat’s.” He says the closure of Lestat’s may be connected to bad decisions by some of Lestat’s regular artists. “I think a lot of artists play too many gigs in the same town, like maybe four shows in one week. Then when they play Lestat’s, the turnout isn’t all that good. I call it musical fatigue.”

He also wonders if audiences in general have Hi-tech ADD. “I watch TV on three different devices. I wonder if audiences nowadays have the patience to sit and watch one singer songwriter. It can get boring. A lot of artists starting out don’t yet know how to put on a show.”

Damigo says he feels for Brazier. “I would be devastated too if something I put every waking hour in was suddenly taken away from me. That was his life.”

A different singer/songwriter who did want to be identified says she doesn’t think owner Husler should get the blame. “A lot of people are blaming this dude when he kept it going for as long as he could. If Louie gets the credit when it did good, he should also get the blame when it fails. You have to keep doing new things. Just because something worked 15 years ago doesn’t mean it will work now. [Husler] gave Louie a job for 15 years. I hope he said thank you.”

Spencer - it also would have nice if Louie would have bothered to return my call. Also, those parting words was how Louie wanted to sign off. Of course Lestats was hugely important. I think that was made clear by what Josh said. Maybe a follow up is a good idea.