Scalper: "How low do you need to go. Name your price." 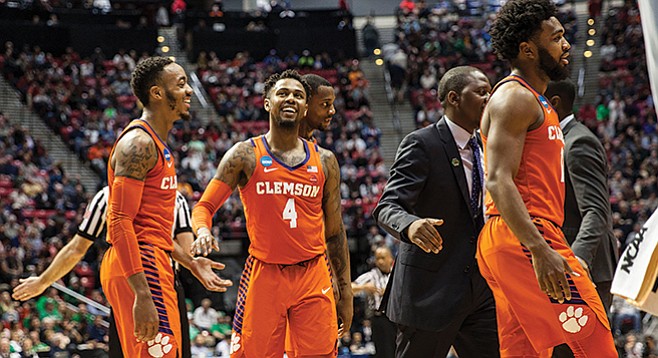 San Diegans lost a last chance to see one of their former prep basketball stars play again locally. Give credit (blame?) to the National Collegiate Athletic Association’s deployment of teams for the first two rounds of its March Madness basketball tournament.

Deandre Ayton, who was born and spent his early life in the Bahamas, played his freshman and sophomore high school seasons at the private Balboa City School that has since moved to Escondido as Balboa School. Recently, he sealed a “one-and-done” year for the University of Arizona by declaring for the National Basketball Association draft, to be held this June 21.

Ayton now stands seven-feet-one-inch tall and weighs 260 pounds. He was named the Pac 12 men’s basketball player of the Year for 2018. He led the Wildcats to a 27 and 8 won-lost record, first place in regular season conference play, and the conference tournament championship.

The NCAA selection committee assigned Arizona a number four seed to start the national championship competition. According to Association precedent, teams with a seeding of four or higher are sent to play in the nearest city hosting the opening two tournament rounds. For this year, on March 15 through 18, that destination should have been San Diego.

Instead, the committee sent the Wildcats to Boise, Idaho, 475 miles further away, where they lost in the first round to thirteenth-seeded University of Buffalo. Many observers figured the decision was due to Arizona’s implication in a widespread and notorious college basketball scandal that the FBI is still investigating. The heart of the corruption allegations came out on September 26, 2017, when the Bureau arrested four assistant college coaches from around the country, a senior Adidas sportswear company executive, several representatives for business and financial advisors, and a handful of go-betweens. The goal of the illicit activities was to influence high school players to commit to certain college teams or to hire the advisors once they entered pro basketball.

Bruce Rasmussen, the selection committee’s chairman, has maintained that the alleged corruption played no role in the group’s decision about where to send Arizona, or any other team, for its regional play or its opening rounds.

Besides San Diego, seven other U.S. cities hosted contingents of eight teams. Of those represented in the SDSU Viejas Arena, the closest geographically were New Mexico State, Wichita State (Kansas), and Murray State (from Paducah, Kentucky). The rest were from the East, not to mention many of the fans in attendance. And no seeds higher than four played here.

On March 10, The SDSU Aztecs achieved a berth in March Madness by winning the Mountain West Tournament with a come-from-behind 82 to 75 victory over New Mexico. Senior guard Trey Kell scored 28 points and was named the conference tournament most valuable player.

The Aztecs and Wichita State then virtually passed in the night as they flew to each other’s arenas for their opening Madness games. Eleventh seed SDSU matched up with with the six-seed University of Houston Cougars at Charles Koch Arena, while Wichita State played Marshall University at Viejas. They would both be eliminated in the first round, the Aztecs agonizingly by only one basket, 67 to 65.

With so many far-away teams present, and the Aztecs playing out of town, Viejas Arena had its hands full attracting locals to the six games that would be played over two days. The selection committee apparently hadn’t been concentrating on attendance.

Nevertheless, the Union-Tribune’s Nick Canepa crowed that, for the second round on Sunday at least, attendance seemed to be robust. Two scalpers, doing business for the first round on Friday, suggested a different story. As I was passing them, one offered me seats for either $75 or $50 each. He then herded me to his partner in crime, who had $30 tickets. When I declined, he asked, “How low do you need to go? Name your price.”

Imagine such prices after the NCAA originally was asking $240 for its best seats.

A few concessions staffers reported that the arena wasn’t very crowded either, especially on the first day. And people watching a few of the games on television told me they had seen empty banks of seats beyond the court.

But San Diego made a good impression on out-of-town visitors. San Diego State University had declared Friday a “non-instructional day,” freeing up university parking lots. And at a kiosk in front of Viejas, competing team sweatshirts and caps and deflated NCAA basketballs were on sale. Twenty dollars seemed to be the going price for most items.

Near the trolley on campus, I met a woman from Huntington, West Virginia, home of Marshall University, which had earned a thirteen seed. After watching her team play, she said couldn’t wait to get over to Old Town. She reported buying her tournament tickets online from StubHub for $61. She was wearing a Thundering Herd sweatshirt, and I congratulated her on her favorite’s first round victory over four-seeded Wichita State. I wished her luck for the state’s other team, playing only a few hours later. “You mean the West Virginia Mountaineers?” she asked. “We hate them.”

On Sunday, I spoke with Jonathan Miller, a CPA from Los Angeles, and his son Steven, who attends Clemson University, in Pickens County, South Carolina. They were sitting on a concrete turf support in front of the arena. “I think we will win easily against Auburn today,” said Steven, “but then we’re likely to get beat by a tough Kansas team next week.” He was right on both counts.

Sitting only 20 feet away were two Auburn fans, who had traveled all the way from Alabama. They declined to give me their names. Despite the lacklustre game their team played in beating the University of Charleston by four points on Friday, they felt their team would bounce back to beat Clemson. The players shot very poorly on the first day, they agreed, nothing like during e the regular season.

How had the basketball scandal at Auburn, and the resultant ineligibility of two players even before the season started, affected their team? Austin Wiley and Danjel Purifoy were going to be the stars to lead the team, “but all year the rest of the players really stepped up to replace them, and we had a good season,” said one of the men.

But the absence of Wiley and Purifoy finally caught up to Auburn. They lost to Clemson in their second round game on Sunday by 31 points.

On September 26 last year, Auburn was one of four teams to have assistant coaches arrested. Auburn assistant Chuck Person, known as the “Rifleman” for excelling in the three-point shot when a player for Auburn in the 1980s and later in the NBA, was subsequently indicted and fired by the university on November 7.

Much like Arizona, Auburn won 26 games and lost only 8 in 2018 and came in first in conference regular season play, although they did not win the Southeast Conference Tournament Championship. So the NCAA selection committee could hardly deny them participation in March Madness. However, it did deem a long trip to San Diego appropriate, when Nashville, Tennessee, or Charlotte, North Carolina would have been expected.

The University of Southern California Trojans pose an intriguing case. The Los Angeles school was not invited to the dance. Many sports commentators felt USC should have gotten at least a low-seed berth in the tournament. They won 24 games and lost 12 overall, came in second in Pac 12 play and bested, by a game, third place UCLA, which sported a 21 wins, 12 losses regular season overall. Yet UCLA was allowed to compete as an eleven-seed.

But the Trojans, too, were one of the teams that had an assistant coach arrested on September 26. Tony Bland, who played under coach Steve Fisher at SDSU and then became his assistant in 2011, took the USC job two years later. The university fired him in January.

A matchup in San Diego of any two of the corruption-implicated teams might have embarrassed the NCAA and perhaps given the lie to the line that David Wharton of the Los Angeles Times pushed that fans don’t care about college basketball scandals.

Having former San Diegans Deandre Ayton and Tony Bland return to town, for instance, especially having their teams play each other, could have stimulated media and fan chatter about allowing market forces, rather than collegiate amateur rules, to determine the career trajectories of talented basketball players. But USC was sent packing. A more realistic scenario at Viejas might have pitted Auburn against Arizona. But the Wildcats were far away in Boise. That matchup would have focused attention on an Arizona team in even greater trouble than Auburn faced. For Wildcats assistant coach Emanuel “Book” Richardson had been arrested before the season started and, in February, the FBI claimed it had wiretapped phone calls in which Arizona head coach Sean Miller was heard discussing a $100,000 payment to Ayton to secure his play in Tucson.

If the claims against Miller bear out, he is sure to lose his job. As for Ayton, the university seems to believe his and his family’s story that he knew nothing about any money being offered him, despite some suspicious circumstances. After Ayton left San Diego’s Balboa City School unexpectedly, and without explanation, he turned up in attendance at Hillcrest Prep Academy in Phoenix through his high school senior year. Between then and his stardom at the University of Arizona, Hillcrest Prep fired its head basketball coach.

According to a June 20, 2017, story in USA Today, “Kyle Weaver, who was the head coach at Nike-sponsored Phoenix Hillcrest Prep’s high school team that went 33-6 and finished ranked eighth in the country by MaxPreps, was let go, according to his brother Nick, who is co-founder and recruiting coordinator of Hillcrest.

“There are many reasons that we do not wish to discuss,” Nick Weaver said in a text message about his brother. “But he was terminated officially."