Bad air by the border peaks at night 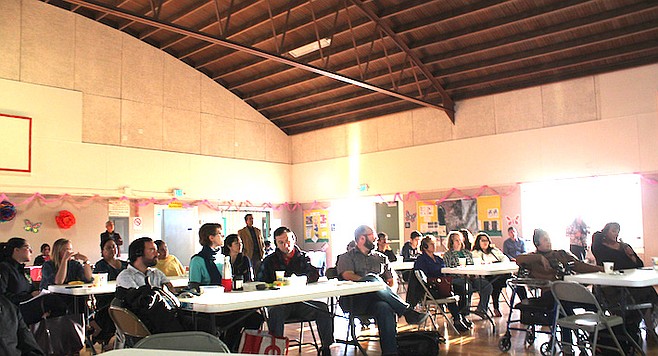 Preliminary results of the year-long San Ysidro air pollution study came out on Thursday, March 29th. The monitoring program in this border community, which lasted from January 2017 to February 2018, showed an increase in pollution levels during the spring and fall seasons. In addition, pollution levels spiked in the middle of the night. 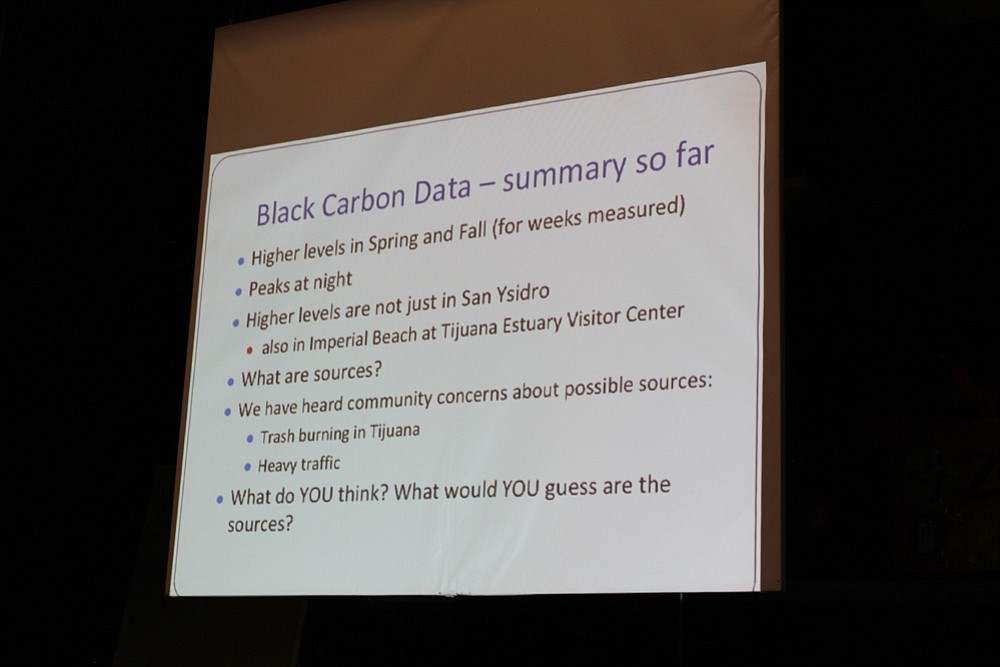 Black carbon at peak during Spring and Fall.

Two years ago the San Ysidro nonprofit Casa Familiar launched a project to analyze air pollution in their neighborhood, located next to the busiest land port of entry in the world. Several residents helped deploy low-cost air quality monitors at schools, trolley stations, near freeways and directly at the U.S.-Mexico border. Scientists from the University of Washington and San Diego State were among the partners who helped collect and analyze the data.

About 30 residents gathered at a Sin Limites meeting in the San Ysidro Civic Center to hear Edmund Seto, associate professor at the University of Washington, explain how air pollution at the port of entry tends to be greater during the morning hours of 5 a.m. to 9 a.m. The data also showed that pollution rose significantly on Christmas Day.

Penelope Quintana, a professor at SDSU and the principal investigator, presented results of the Snapshot Campaign when students went up on rooftops everyday for a week to a month and conducted detailed measurements of particulate matter, including black carbon.

Black carbon generally comes from diesel burning trucks and is a known carcinogen. Quintana explained that particles found in black carbon are not only ten times more toxic than regular particles, but infiltrate indoors, so people might be exposed in their homes. She added that black carbon pollution is a strong risk factor for cancer and cardiovascular disease.

The study compared pollution levels in San Ysidro with the Tijuana Estuary Visitor’s Center in Imperial Beach. Notably, pollution levels showed the same pattern in both locations—with elevated levels of black carbon during the spring and fall, particularly at night. Quintana said, “What this means is that there’s a regional source. It’s not just San Ysidro that’s polluted, there’s something at night that’s polluting the whole area.”

Going forward, researchers will expand the study to analyze wind direction. They hope to work with counterparts in Mexico and with SANDAG to get traffic counts.

When asked where the air pollution may be coming from, Quintana said that when she first started working on San Ysidro pollution in 2007 not much attention was given to air quality coming from Tijuana. However, she surmises that air pollution is a cross-border problem. “We give pollution to Tijuana and they give it back to us. Pollution blows during the day to the southeast and then at night the winds shift and they come back this way.”

You can literally see the smog from TJ rolling over San Ysidro and IB from Otay Mesa.

Both the smog and the sewage are coming in from TJ.

Plus all the illegal drugs, too, including the deadly Fentanyl.

by way of china