Rough road ahead for solar adopters

Bad news among the good 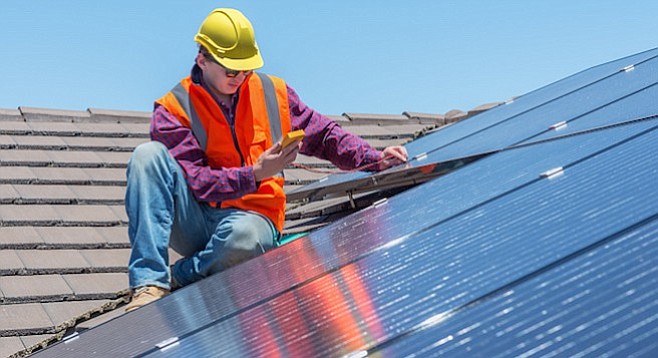 The Solar Energy Industries Association was in town last week, hosting an annual conference for more than 800 solar-related businesses.

"The market has continued along going into this year — we may see a slowdown coming due to the changing economics, but for San Diego, with its ideal environment, there's still a strong inclination toward going solar," said the association's state director, Rick Umoff, when reached for comment on Monday (April 2).

One key factor in those changing economics is a push from utilities to move new solar customers into a "time of use" pricing plan that pays them less for power delivered to the grid when the sun is likely to be shining and charges more for power purchased during the evening hours.

"This is happening with [investor-owned utilities] across the state, not just in San Diego," Umoff noted. "What it's ultimately going to do is drive storage adoption."

Since new solar utility customers (and existing ones, as grandfathered rate plans expire) won't be able to count on earnings from feeding excess power back into the grid; installers say that in-home battery backup that allows a house to store excess energy for the evening is an important component of a solar system.

In recent months, representatives of storage solutions like Tesla's Powerwall have taken to hawking their wares in the aisles of big box stores such as Home Depot, where displays have become a permanent fixture. Still, the batteries can add $6000 or more to the cost of going solar, money that'll take longer to recoup given new lower utility purchase rates.

"We're in a bit of a transition period," Umoff says, though in the long run he's not worried. "In the coming years, as customers adopt to the new time-of-use rates and the cost of on-site storage comes down more benefit will shift back to the consumer.

"New trade tariffs are going to mean additional soft costs over the next couple years, but the effects are really going to hit more next year than this year," Umoff continued.

Data provided by the Association suggests that throughout California, where 15 percent of energy needs are met by solar, the average cost of a new installation has decreased 55 percent over the last five years — more than offsetting an increase in importation costs.

Investor owned utilities are all about making money as in profit for the shareholders. Ratepayer owned utilities are the only way to go. As for solar one should be very cautious. Not everyone qualifies for the "30%" tax credit and the financing costs may outweigh the savings. Those who sell solar systems are in the business of sales more than installation and service. Nothing is ever "as seen on TV". Buyer beware.