"A lot of people feel safer and cleaner having to crap on the street." 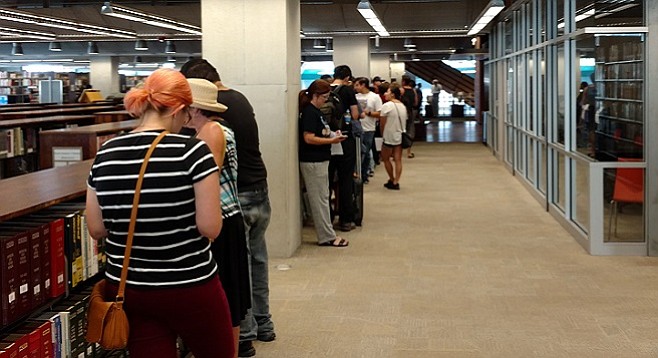 An outbreak of the fecal-contamination-borne liver disease hepatitis A has sickened more than 400 people in the San Diego area since November 2016, causing national media outlets to mock the "man-made disaster" that thus far has disproportionately affected the country's fourth-largest homeless population. Los Angeles fears the disease will spread north and evidence suggests that may already be happening. 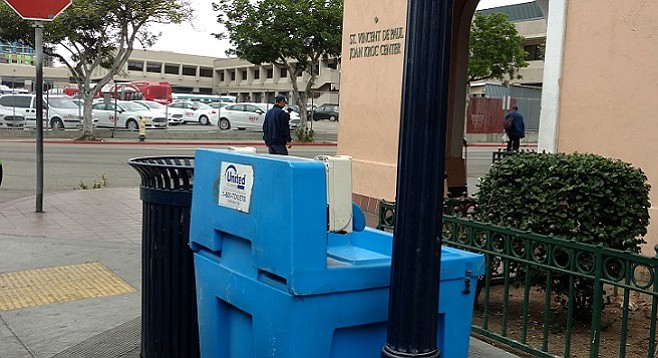 For more information on hepatitis A safety and vaccinations, officials direct the public to the 2-1-1- San Diego website. But at press time, when one attempted to access the relevant information, nothing happened (the dead link was eventually fixed).

At a Tuesday-afternoon vaccination clinic at the downtown library, a line that's up to 60 people deep snakes throughout the second floor. The queue moves quickly, but few of the locals electing to get the shot give the appearance of living on the streets. More clinics have since been held at the library, but an unnamed county staffer admitted to a general lack of schedule organization. 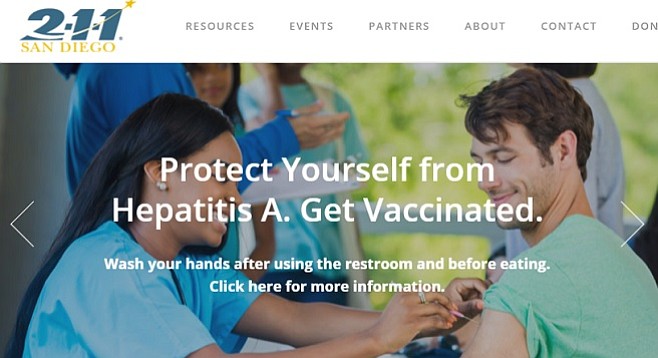 "I've honestly got no clue," she responded when asked about other clinic times and locations. "I didn't know I was going to be here today until I showed up to work this morning."

Longtime homeless advocate David Ross, known in the homeless community as “Waterman” for his daily treks to deliver free bottled water, feels the city's reaction to the crisis has been ineffective and too long coming. He met me at the library clinic to vent his frustrations.

"Anything that gets done is a positive, but I didn't see five people that I know from the streets in that line," Ross says. "When we go down to 16th Street you're going to see hundreds of people out there who don't even know that this is happening. Nobody told them. And even if they did know, they can't bring their stuff in here, so if you're not going to take a chance that some crackhead will steal your shit or that a policeman will pick it up, this is off-limits.

"You've got to bring services down to where the people are — you've got to orchestrate things so that it's convenient enough to reach the population immediately," he continues. "There's awareness on the street, but remember you're dealing with people who are conflicted, constricted, addicted…. You tell them something, and unless you've got an immediate solution — ‘You go here right now and we'll get you taken care of,’ they'll go, 'Yeah, man, I'll do it sometime’ or whatever."

Ross suggests setting up mobile vaccination clinics near large homeless populations, such as the Neil Good Day Center, which we visit after the library.

Though the center is packed and patrons spill out into 17th Street, tents and other improvised shelters lining the sidewalks, none are game to grant an interview regarding their views on the illness. Many, though, are familiar with Ross’s signature "hepatitis handshake," curling a hand back to the shoulder and good-naturedly bumping elbows in greeting. He later estimates that about a third of the people whom he encounters say they've received vaccinations.

Ross is also unimpressed with the initial bathroom placement.

"So they put the first four of these portable bathrooms outside city hall, where they've already got a public bathroom. Why are you going to put more around the corner?" he asks. "We don't need them there, we need 'em down on the east side, where the homeless people are. Homeless people aren't gonna come up from 16th Street to 2nd and C to go to the bathroom." 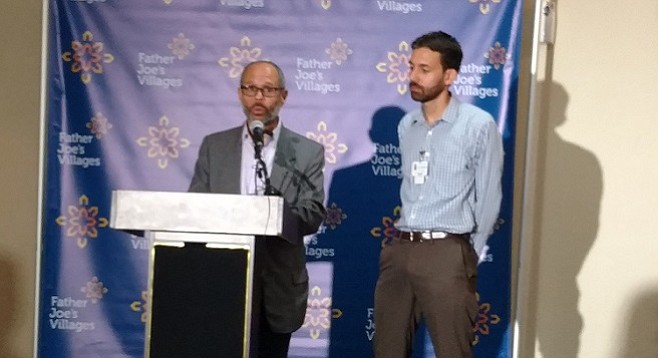 Deacon Jim Vargas, at a Wednesday-morning press conference on the outbreak at Father Joe's Villages, said his group's facility on Imperial Avenue has long provided restroom facilities to the East Village homeless population.

"Sanitation is a big aspect of this situation," Vargas acknowledged. "A couple of years ago, we entered into a contract with the city where we opened up our restrooms 24/7. Even before the hepatitis A situation, the need was apparent to offer sanitary facilities to this population.

"It's been challenging all along, and it's been even more challenging of late," Vargas continued. "We've had to increase our cleaning schedule to once every two hours."

"We have the county on-site at Father Joe's Villages four times a week providing vaccines," Norris said on Wednesday. "They're at the clinic on Mondays and Fridays from 9 a.m. to 3 p.m., and they're at the Day Center on Tuesdays and Thursdays from 9 to 3."

A PR contact for the organization says the county and staff nurses have been delivering vaccines on the above schedule since late July or early August. In that time, between 1000 and 1200 shots have been administered.

"We've also worked with the county to install hand-washing stations both at the Day Center and here at the Village," Norris continued. The portable units have indeed begun to spring up along Imperial Avenue and 17th Street, and as many as 42 units are expected in coming weeks.

After the conference concluded, Father Joe's sent out another announcement — a second event, this one scheduled for Thursday morning — would address the bathroom situation in further detail.

"The bathrooms there are disgusting," groused Ross when asked about them earlier. "With all the drugs, crap on the floor, crap on the walls, a lot of people feel safer and cleaner having to crap on the street."

Vargas, standing alone in the St. Vincent de Paul courtyard this time, both acknowledged problems and promised solutions were being sought, despite a dearth of other public restrooms placing undue burden on his facilities.

"Public restrooms are a challenge to maintain, and we're no different," said Vargas. "The reality is that we clean them every two hours. That said, there is illicit activity that happens within these bathrooms. It's not something we'd like, obviously, and it's something that we're addressing. For example, I've ordered these gigantic commercial fans for the sheer purpose of blowing constantly so that people can't be [using lighters to heat drug paraphernalia]; it'll blow out the flames. We've cut the doors in the stalls down so they're half-doors, with the hope that greater visibility discourages illicit activity."

Even if the redoubled vaccination and sanitation efforts eventually prove successful, it could take some time for the effect to be realized – the hepatitis A vaccine has an incubation period of up to 45 days. Public health officials say the crisis could persist for as long as six months after the number of new infections finally begins to fall.

Bums, the mentally ill and druggies will not get vaccinated. Most of the "programs" that are designed to help the homeless only enable them to remain on the streets. The City and County are now the champions of "affordable" housing which, is at best an oxymoron, and are aiming to get the do nothing druggie/alcoholics into permanent housing while those who work in the Walmart economy struggle.

Why is it that some are unable to comprehend the simple fact that the more "services" we provide, the more transients we get?

The only rational response is to make San Diego LESS attractive. Move them on. Make it clear that, weather aside, San Diego is going to e a pretty miserable place to be a bum, and they're better off heading to LA or something.

"Not here" is the only answer. We cannot solve the problem, but we can solve our problem.

We can no longer allow defecating in the streets, alleys and dirt/grass areas. It MUST stop. And the blocks of sidewalk homeless camps in San Diego must be eliminated, too. Drastic problems require drastic measures. The homeless have rights, BUT the overall health of the community has been compromised, and the dangers are quite real. All public bathrooms must be cleaned and sanitized several times a day with bleach.