Maybe they're there for the tropical detox 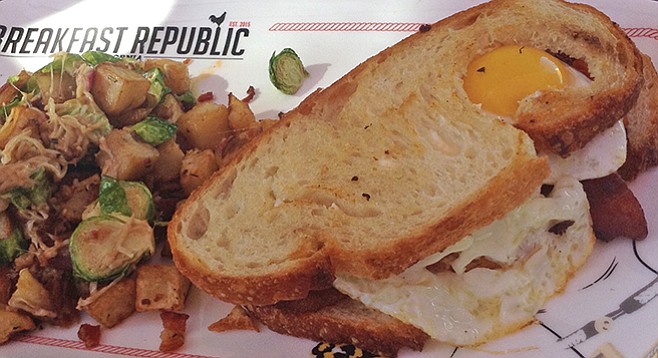 "You can’t unmilk a coffee,” this guy in front of me’s saying. “Once it’s in, it’s in. One-way ticket. Like marriage.” 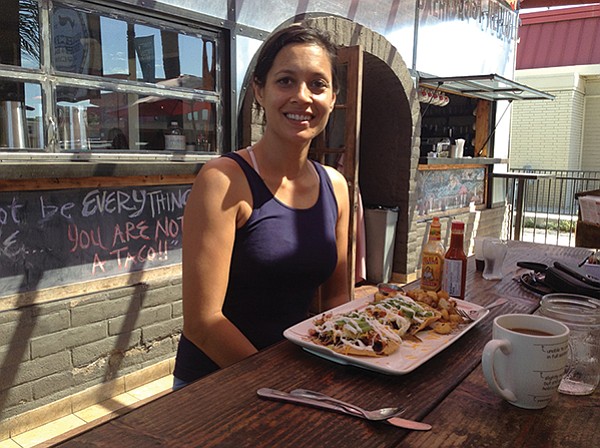 Lorraine and her tostadas

This is Monday morning. Yet the place is totally jamming.

Then it’s my turn to sign up with the gal in the green T-shirt. 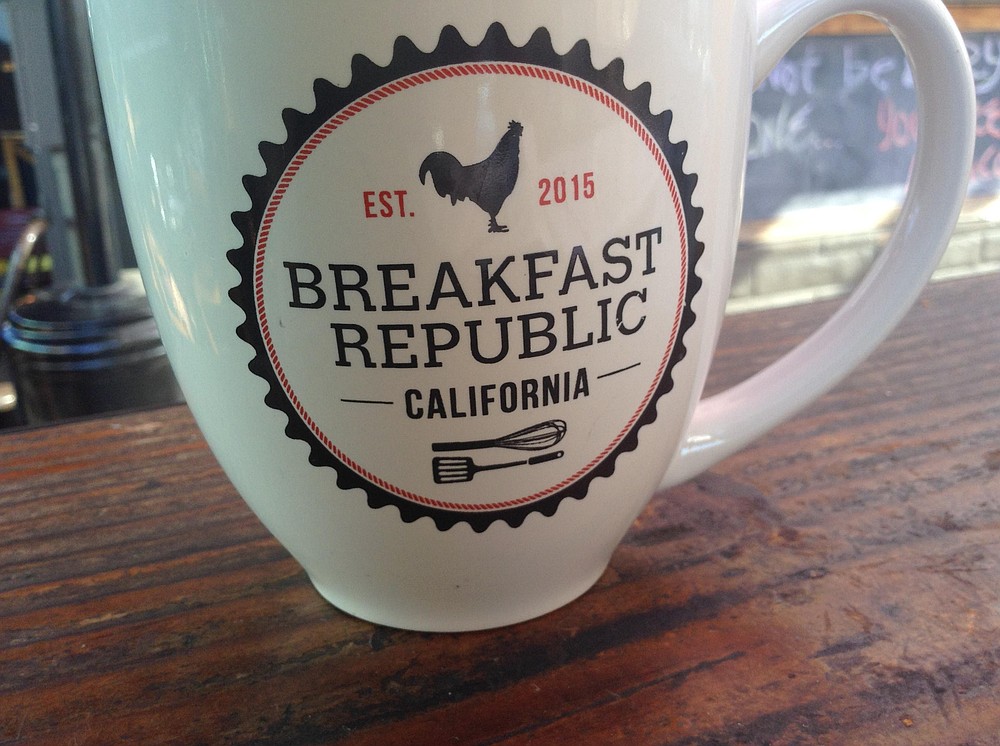 The cup says it all

I notice her shirt back says “I don’t always eat breakfast, but when I do, I eat Dos Eggies.” She gets another greenshirt, Jenny, to take me to this outside plank table sheltered from the sun on one of the two levels of deck out here. And that’s when this incredible thing begins. 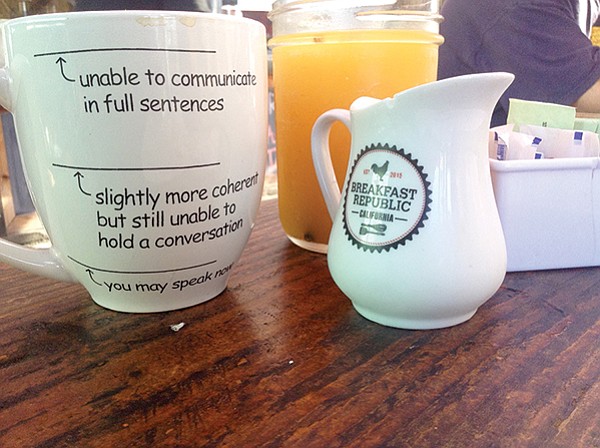 Word of truth on the other side

At the start Jenny asks if I want anything to drink. And here, turns out they mean just about anything. Breakfast Republic's a brekky place but they’re gung ho on beers, wine, cocktails. 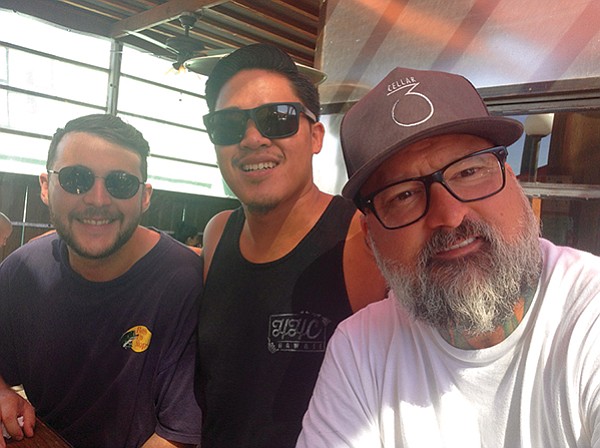 At the other end of the spectrum, they have things like organic antioxidant shots. First is “tropical detox. “Geared towards detoxification of heavy metals while increasing blood production, balancing hormones, blood pressure, and cholesterol.” Basic ingredients: fresh-pressed organic mango, pineapple, and grape juices. Plus “organic gelatinized Peruvian maca, grown at 14,000 feet, and organic wild Ecuadorian spirulina grown at 9500 feet.” 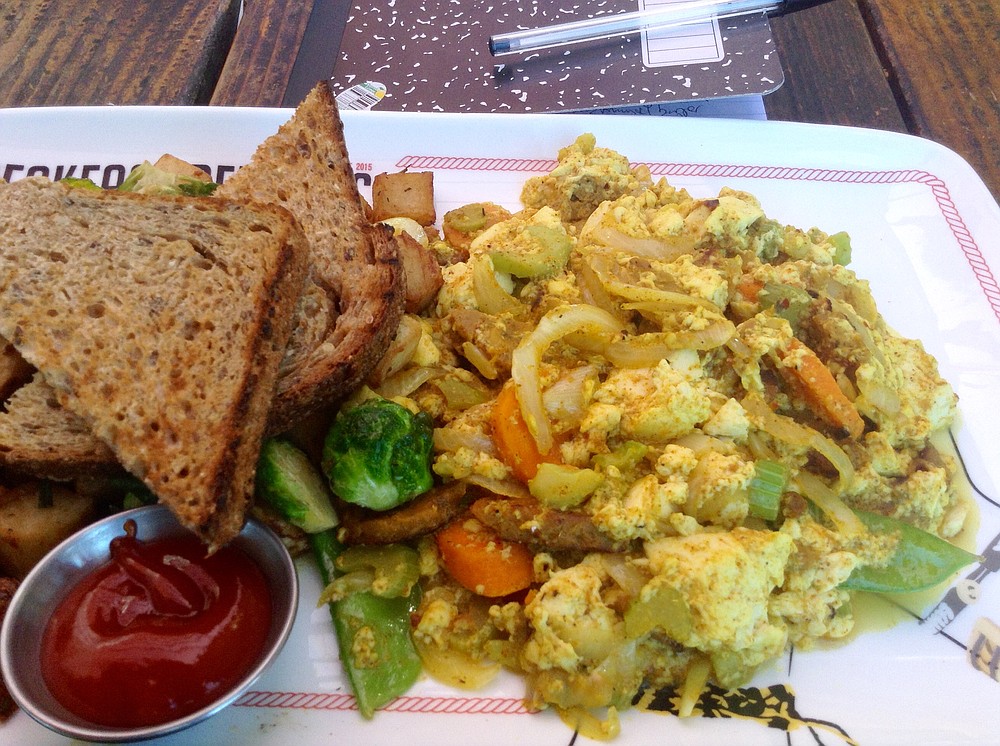 Isn’t maca the plant that gave Inca warriors awesome powers to make love and war when they ate it? Whatever. While I’m digesting that, I ask for water, a coffee, and an OJ. Only notice after that the OJ (“fresh-squeezed”) costs $3.75, or $4.75 for large, and the coffee is $2.95. But coffee includes forever refills and they promise it’s organic. They also have this “coffee flight” deal for if you can’t decide between a latte, a mocha, or a Mexican mocha. You get four ounces of each for $8.

My coffee’s delicious. From Café Moto, Jenny says, “our own blend.” And the OJ has that fresh-squeezed flavor.

So I’m sitting here, checking the menu for an interesting breakfast, when another lone wolf gets sent to this table. He quickly orders the first thing on the list of breakfasts, the Breakfast Sammie. Comes with “Jurassic pork bacon, tomato, herb spread, eggs sunny side up, sourdough bread, house potatoes.” Costs $10.

While he’s waiting, he hauls out a book: Musicians in Tune: Seventy-Five Contemporary Musicians Discuss the Creative Process.

Huh. Would love to have that book. Have secret songwriting ambitions myself.

He’s from Sydney. Touring around California. Says this breakfast place would fit right in back home. Only difference? “Our coffee is much better than yours. People are fanatics over there.” He tucks into his breakfast sammie. It’s two big chunks of sourdough toast with a hole ripped out so the egg yolk can shine through.

Me, I’m tossing up between breakfast hot dogs (bacon-wrapped, with two eggs, house potatoes, for $10.50), a croque monsieur (basically gruyere cheese on toast with ham and bechamel sauce for $11), a mushroom-and-pesto benedict ($12, “recommended with asiago-fennel sausage, + $2”), and a Portuguese linguica sausage scramble, made with four “cage-free” eggs ($12). But I finally decide on the vegan Madras Curry Scramble ($12). Even though — aargh! I realize that means no eggs. No huevos! At a breakfast joint? Still, they do give you soft tofu, vegan sausage, various veggies, plus house potatoes and (multigrain) bread. And I do invest in a $2 upgrade on the potatoes to “Brussels sprouts roasted potatoes with parmesan cheese, bacon, balsamic vinegar, and onion.”

And, yes, the tofu and vegan sausage are pretty convincing. The whole thing feels like a mild Madras curry for British colonels.

Here’s where it starts to get weird: Jenny brings Eric, another stray male, to the table. He sits down, orders the mushroom’n pesto benedict. When it arrives— dang, it looks good, with the green pesto, red bell pepper, green spinach, the hollandaise, plus pesto.

But, turns out, Eric also plays and sings his own songs. And when Adam, this guy with tats thick on his arms also sits down, he says he’s a musician, too, has been an audio engineer for years, it starts to feel Twilight Zone.

’Course, we all prick up our ears at the words “audio engineer.” This man could save us! First he has to order. Asks for the “American” (3 eggs, sausages, potatoes, $11.50). He seems to sense everybody panting. “Just because I’m an audio engineer, everybody says, ‘I’ve got this song. Can you help?’ I’m always honest. I tell them ‘No.’ Because I have my own studio. I don’t work in the public realm.”

But it’s not over yet at this magic table. Hardly have the guys gone (Yeah, I’m still the slow eater), when this gal plops down and orders the second item on the list: two veggie breakfast tostadas. Lorraine. Lorraine Castellanos. She’s a — ! — jazz musician. Husband’s Gilbert Castellanos. She’s also a classical guitarist. I google her. On one track she’s singing the French classic “C’est Si Bon,” like, you wanna say, Eartha Kitt. Billie Holiday.

But what are the chances that five musicians should separately come and sit down for breakfast at this one table? These have to be magic planks. And actually the place is pretty magic, too. The guys running it have turned this bland li’l ex–Taco Bell–type joint into a bunch of patios full of life where you just want to eat, drink, talk music all day.

RE: "ex-Taco Bell-type joint" No, it used to be Western Steakburger. ;-)