Crowlers are changing the way we take beer home

Pint-size advantage for the nanobrewery 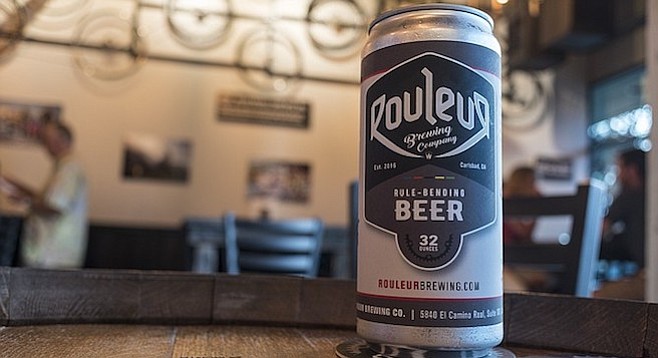 I recently reported that San Diego's breweries have begun favoring cans over glass bottles, but that's only half the aluminum story. The same trend has been taking hold in the way tasting rooms offer growler fills, with the growler alternative known as a crowler (can-growler) surging in popularity. A 32-ounce can is filled on-demand from the brewery's tap, then capped and sealed by a small machine behind the bar.

In the past three years, two dozen local beer companies have made the $3000 to $5000 investment in crowler equipment — half of them over the past six months. In addition to the storage benefits of aluminum over glass, advantages a crowler offers over traditional growlers include disposability, sanitation (because growlers are notoriously tough to clean), and perhaps most important: convenience.

The unsung heroes of the craft boom's early days were the enthusiasts who showed up to house parties with freshly filled growlers in hand. A 64-ounce glass jug made the beer seem more interesting than anything sold in a six-pack, and the volume of the container made it easy to share stronger beer styles with new craft-beer converts. But these days, special-release bottles and cans have usurped the growler's cachet, and since most hard-to-get beers aren't usually available for growler fills anyway, the heft of a glass growler has made it almost a burden.

"I'm a beer fanatic and own at least 15 growlers," says Rawley Macias. "I no longer have space for more." Macias opened Rouleur Brewing Company in Carlsbad earlier this year and knew from his experience that a beer fan may not always carry a growler with them when they visit a new brewery and may not want to buy a new one. So he installed a crowler machine. Since a crowler fill doesn't require any additional purchase, he points out, "A customer can buy a crowler on a whim if they like a beer."

For a small-batch brewery that doesn't routinely distribute beer, the convenience of a crowler may replace the glass growler's role in getting unique beer out of the tasting room and in front of more people. After three years offering traditional growler fills, Miramar's Intergalactic Brewing Company added a crowler machine last year, and cofounder Alex Van Horne says the machine's price tag has been quickly accounted for by additional sales. "We see more beer leave the building, for sure," he says.

Another small-batch brewery, Thunderhawk Alements, added crowlers on demand last month, ahead of its first anniversary. "The crowler was the best to-go package that made sense for our size," says cofounder Jonathan Barbarin, hinting at one advantage nanobreweries have over even mid-size producers. "We want all of our beer consumed as fresh as possible."

These are the breweries (and cidery) currently offering crowlers in San Diego: