What about that promised 30-minute wait time? 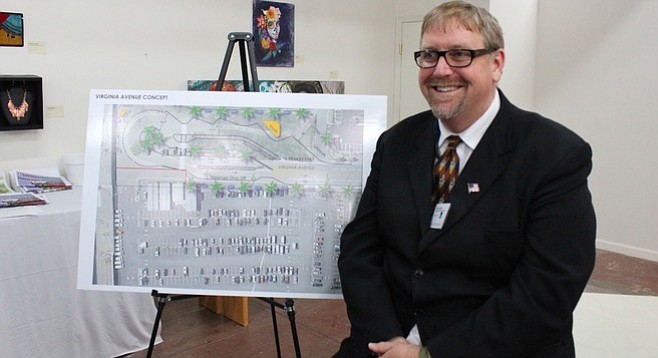 In December 2014, the federal General Services Administration completed Phase 1B of a three-phase San Ysidro Port of Entry makeover. The construction project opened 25 new northbound lanes and 46 new primary inspection booths at the largest land port of entry in the world: on average, 50,000 vehicles cross northbound each day.

“Our traffic model indicates that if all lanes and booths are manned and operated, the expected border crossing time will dramatically decrease to less than 30 mins,” Traci Madison, the agency’s regional public affairs officer wrote in an email dated September 9, 2014.

While 30-minute waits did occur for a brief time, in a presentation to the Chula Vista City Council on September 12th, Anthony Kleppe, the port of entry program manager, said that the current wait for northbound vehicles at the port is about two and a half hours. In a later interview, he explained, “When we developed the project, there was a lot of discussion about latent demand. The concept of latent demand is that if you have an environment where people are waiting long periods of time to cross the border, they don’t cross. Then when you open up the border and make it more accessible, people who maybe previously would have hesitated in crossing the border decide to cross. What we’ve seen at San Ysidro with the opening of the 1B project is about a 20 percent increase in the number of people crossing.”

The new San Ysidro border reconfiguration began in 2009 and throughout the years, the General Services Administration has held numerous local meetings where they have received input from the community. In an original plan, residents had asked for a “bridge deck,” that is, a covering between the Camino del Plaza bridge and the Pedestrian East-West Bridge that could provide park space. The General Services Administration scrapped the plan early on.

Then, in 2014, the General Services Administration unveiled architectural designs for a new pedestrian crossing, known as PedWest, located across the street from the Las Americas mall. During community meetings, some called the rendering a “road stop bathroom” and asked for a world-class facility, but the General Services Administration opened PedWest in 2016 with no design revisions.

Jason Wells, chief executive officer at the San Ysidro Chamber of Commerce, said in a phone interview that he supports the reconfiguration and the opening of more lanes. He added, “We will demand that we see a huge drop in 2019 of wait times. Now, if in 2021 or 2022 it starts creeping up again, then I’ll happily go after [Customs and Border Protection] and their efficiency. At least we’ll know the infrastructure is there.”

Wells explained that, at the end of the day, it comes down to the guy in the booth. “We could have kept our original 24 lanes and had 30-minute wait times if CBP wanted to do so.”

When asked if the General Services Administration has any input into whether lanes and inspection booths will be fully manned by Customs and Border Protection agents after the reconfiguration is complete, Kleppe said, “GSA’s job is to construct the facilities necessary for our federal tenant agencies to conduct their missions. If you have questions about operational elements within [Customs and Border Protection], we would direct you to go talk to them.”

Or nothing. Like everyone in IB whining and demanding that the US do something about the sewerage from Mexico. It seems that they, like Trump, do not understand that Mexico is sovereign nation.

First of all.. It's sewage.. Not "sewerage". Second, do you even live in IB? I'm guessing you don't. If you did, you would have smelled and experienced what's going on down there, and I highly doubt you would refer to it as "whining". Finally, most IB residents are aware that Mexico is a sovereign nation... But we are also realistic and intelligent enough to understand that they don't have the resources or money to adequately deal with the issue. If you knew anything about the efforts that have been put into dealing with it, you would have known that the first steps that were taken in regards to the sewage spills involved reaching out to and meeting with Mexican authorities/officials.After they advised there wasn't much they could do or were going to do, the city of I.B. then reached out to the US govt.