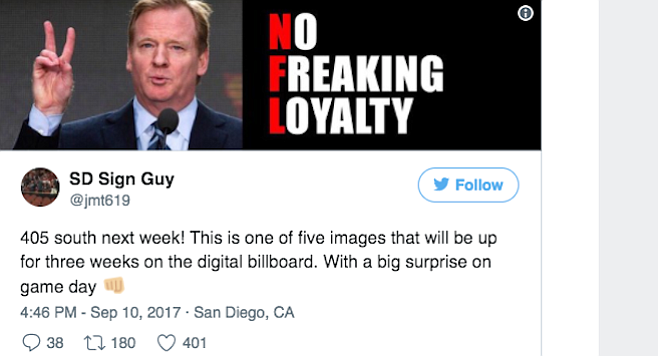 Bitter Chargers fan Joseph MacRae has raised $10,000 to erect anti-NFL digital billboards near the team's new temporary home at StubHub Center in Los Angeles, according to ESPN.com and KSWB-TV. He will post five biting messages for the next three weeks, when the team has three consecutive home games versus the Miami Dolphins, Kansas City Chiefs, and Philadelphia Eagles.

One has a photo of National Football League Commissioner Roger Goodell flashing the victory sign. The sign says, "NFL. No Freaking Loyalty."

MacRae wrote on the GoFundMe page, "This isn't just for the San Diego fans. This is for Oakland fans and St. Louis fans as well." (The Los Angeles Rams were moved from St. Louis and the Oakland Raiders intend to move to Las Vegas.)

Last January, MacRae showed up at a Chargers rally at the Forum in Inglewood (where the Chargers and Rams will be based in 2020) and heckled Dean Spanos, the team's major owner.

Don't you just love Freedom of Speech, especially when it is applied effectively. To bad a more politically incorrrect word wasn't used for the "F" in NFL. That would describe what billionaire owners and millionaires players are doing to the game in the name of extracting every last dime out of the fans.

JustWondering: Astute observation. That verb that starts with an "F" is what billionaire team owners do to taxpayers, too. Best, Don Bauder

I thought I said that! Nah, you're right, some taxpayers are not fans of the game.

JustWondering: My memory may be hazy on this, but I believe that during the 1998 battle over the munificent gifts to Moores, somebody figured out that half the people in the county (or the city, or both) didn't give a damn about the Padres or the Chargers.

While many disagree I believe that the move to LA is a mistake. I never liked the Spanos clan and I hope I am right. As far as I am concerned they went from the Chargers to the DisChargers.

AlexClarke: Leave it to you to come up with a brilliant name: DisChargers -- although I think I may have heard it before.

Keep in mind that Spanos and Fabiani DELIBERATELY made themselves hated in San Diego. They did not want to win that vote. Their supercilious behavior prior to the vote was carefully crafted.

The history of this defecation on the city goes back to the mid-1990s, when the Chargers insisted on a clause giving them a right to leave. When Fabiani came aboard in the early 1990s, he said his job was to wangle a stadium in San Diego OR Los Angeles. Best, Don Bauder

Richard Earle Laws: I can think of several places where a blow really hurts. One of them REALLY hurts. Best, Don Bauder

panchy: You mean the ankle? No. It sounds like you know what I mean. Best, Don Bauder