Abandoning the screen for cardboard

The combination of craft beer and Connect Four 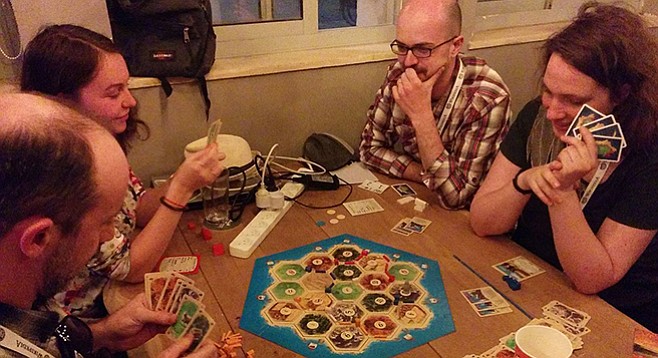 Dear Hipster: At first, the news that Game of Thrones would not return till 2019 came as a devastating shock to me and the group of friends with whom I gather every week to watch the new episode and get 80 percent drunk on any given Sunday night. We asked the same question as ten million other desperate fans, how would we fill that vacant time? Our solution is that we will play board games together. Not only is it conducive to snacking, beer drinking, and the cracking of jokes; lots of games incorporate a sort of light-duty fantasy element, perfect for those of us who enjoy the occasional dragon-roasting-an-army scene but don’t want to go full Dungeons and Dragons. Of course, that’s neither here nor there as far as why I am writing you. I was pondering the oddity that my group of friends (average age somewhere north of 30) are all stoked to sit down and play board games. This thing that used to be for kids is now pretty much for adults, even to the point where my local bar has a Battleship set that anybody can use. I’m pretty sure none of my friends’ kids want to play Battleship (I asked). So, if kids aren’t into them, what is it about board games that appeals to 30-somethings and IPA-loving hipsters? — Seth

Life in the digital age is a constant struggle for the average hipster. On the one hand, who can deny the simple delight of posting Snaps of your sandwich and raking in the likes. On the flip side, hipster society elevates the material and tactile; whether brewing your own kombucha or launching a Kickstarter campaign to promote a reverb pedal for hipster guitarists that works not digitally, and not by electrifying a spring, but by actually microeroding a miniaturized limestone cavern for the sound to bounce around in.

When you combine that preference for the analog with a lust for all things vintage, it’s hardly a stretch to sell hipsters on the combination of craft beer and Connect Four, but there’s more going on here than meets the eye. Unlike the occasional hipster barroom Battleship player, the majority of adult board-game fans sit down to play without a shred of irony.

Board games themselves have changed a lot since the time I was a little hipster. Back then, adults would occasionally dust off a World War II–era Parcheesi set, which will occupy a group of kids unless and until one of them accuses another of cheating, thereby starting a brawl that only ends with forced separation and possibly the revocation of otherwise promised snacks. Today’s board-game player can afford to be a little more discerning, even going so far as to publish elaborate online reviews of a new game. Beginning with Settlers of Catan in the late ’90s, the rise of the “Euro” or “German” style board game, where strategy and quiet dedication aim to pay off over the roll of the dice, has created a board-game culture for grownups. People who spend an entire week staring at a computer screen want to get together with friends and play with cardboard. In many ways, it’s the ultimate, lo-fi analog social experience, and an antidote to mainstream overstimulation.