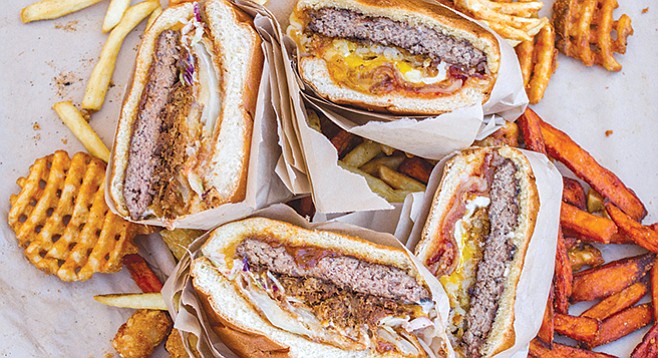 I used to eat burgers all the time, but as I got older and developed a taste for all types of food, I became more discerning. Hence, when I have a burger these days, I want it to be something special, not just sustenance. Sometimes, that means trying a burger that is a little different, like one made with poke, Kobe beef, or no meat at all. Other times, I want an amazing location or four-star service. All of the places below don’t just sell burgers, they serve experiences.

Poke hasn’t replaced tacos or burgers as San Diego’s fast food du jour, but it isn’t for lack of trying. San Diego Poke Company is hoping to win converts with three styles of poke burgers: Spicy Tuna, Sweet and Spicy Salmon, and the Ono (which is seaweed salad and hot Cheetos). All are $9.95, and all are served on buns made out of rice seasoned with furikake. All have their merits, depending on your mood, though I’m partial to any burger with hot Cheetos. Since poke is raw and kept cold, these burgers are perfect for the hot days of summer and early fall.

Cafe Gratitude is an all-vegan eatery that seems to be patronized by the types of beautiful people typically only seen in yoga studios or my Instagram feed. That said, the Magical Burger ($16), made with black beans, beets, and cashew-macadamia cheese does an amazingly good job of duplicating the mouth-feel of a meat burger — especially with the chipotle ketchup. The french fries are hot and crispy and have lots of salt. One key note: the server may want you to order the burger by saying, “I am Magical.” You have been warned.

The Blind Burro is one of the most satisfying Mexican spots in the Gaslamp. Burger lovers will appreciate the Ranchero Burger ($15), a beefy monolith containing brisket, egg, avocado, bacon, and ranchero sauce on a telera roll. It’s spicy and salty in a most satisfying way. Rather than put ketchup on this baby, I like to pair it with one of the Burro’s micheladas ($9), which blend house-made sangrita (a sort-of Mexican Bloody Mary mix) with a Mexican-style lager.

You can’t beat the location: overlooking the ocean near the Scripps Aquarium. The prices are amazing, considering the real estate. And the burger ($12) may be the best I’ve had in a year — a near-perfect blend of juicy meat, caramelized onions, bacon, and just enough blue cheese for flavor, but not enough to overpower the other ingredients. The downside to this meaty masterpiece? Caroline’s Seaside Cafe is strictly breakfast and lunch, and lines can get long, but this is definitely a place where cheapskates can impress out-of-towners with the California dream.

Royal Stone Bistro is a relatively hidden hideaway in Bankers Hill, but the burger ($16) is first rate: a fresh brioche bun topped with nicely seasoned ground beef and housemade garlic aioli. Fontina cheese adds a nice creaminess and the butter lettuce, heirloom tomato, red onion, and house pickle practically make the burger a salad... Well, let’s not go that far. Bacon is available for an upgrade (and it’s worth it). Do not waste this burger with a mere beer: Royal Stone has a great wine list and this burger is worth a nice fruity red.

This El Cajon hole-in-the-wall has a large menu of huge burgers. As much as I enjoy the pizza burger ($12) that is topped with both pepperoni, sausage, and mozzarella cheese sticks, the Hangover burger ($10) at Funky Fries is the one I crave most. Topped with bacon, crispy hash browns, and an over-easy egg (just enough to add moisture), it promises a good morning no matter what time you eat it. Make sure you order the burgers medium rare — otherwise, they will cook them well done. Potato heads can get their fries in traditional, waffle, and tot-styles. If you want them topped with, say, gyros meat or buffalo chicken ($9.50 each), get the waffle style — they’re less soggy.

The service at the Westgate Hotel’s Westgate Room is first class in the European tradition. The three styles of burgers are all-American in the best way. The Kobe burger ($18) is elegantly understated: the meat is so good it doesn’t need to be gussied up. The Angus slider trio ($14) is topped with blue cheese that pops with flavor, especially when paired with a pinot noir. The brisket ($15), covered with BBQ sauce and fried onion rings, is tender, tangy with just the right amount of salt.