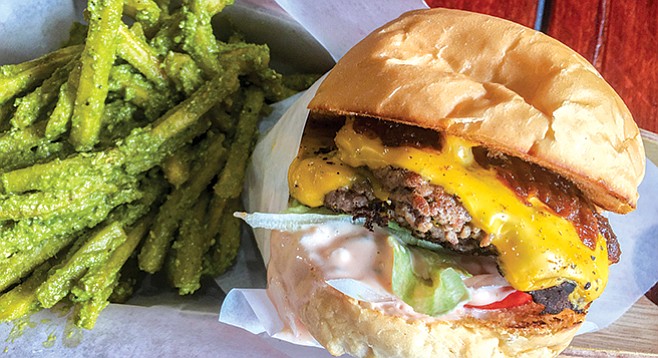 A hungry San Diegan can chose from hundreds, maybe thousands of places to eat Mexico’s fast food of choice, the taco. It only seems fitting that tijuaneneses should be able to eat the American fast-food standard, hamburgers, in Tijuana. Until the past decade or so, they could only do so at the low-end fast-food franchises I won’t stoop to name here. Here are a few spots to buy a better burger in Tijuana. 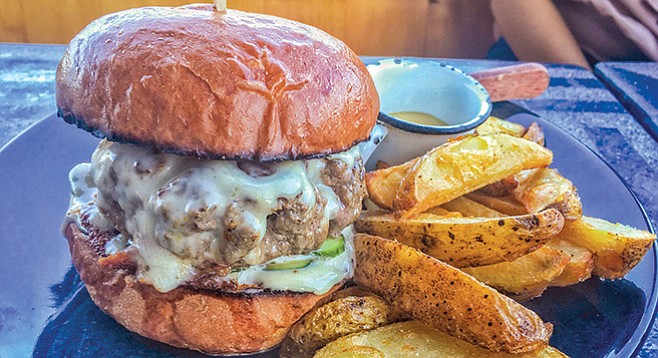 Cafe Tonala Burger.The patty is chunky and juicy made with 180 grams (about a ⅓ of a pound) of ground beef.

Cine Tonalá brought to downtown Tijuana a cinema that plays independent movies and documentaries, theater, concerts, and an ample rooftop dining experience. Vegetarian friends praise the grilled portobello with pesto and avocado burger for $7, but they have no idea what they are missing with the beefy signature Tonalá burger for $9.50. The patty is chunky and juicy made with 180 grams (about a ⅓ of a pound) of ground beef cooked medium rare (my choice) topped with Monterey jack cheese mixed with garlic aioli. Added flavor comes from the Persian cucumbers hidden below the meat, and tomato marmalade topping it. 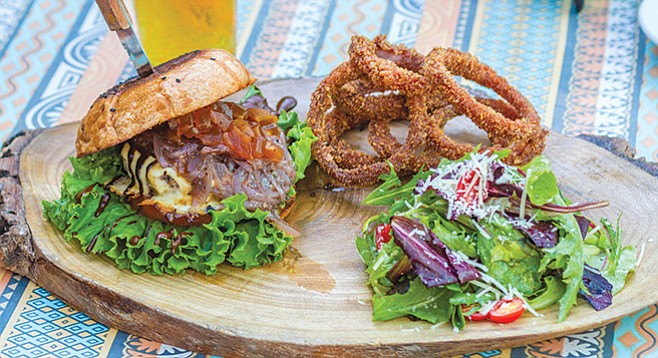 Chef Oso Campo made his fame selling experimental seafood tacos on the streets of Tijuana with the Kokopelli food truck. The project grew to a couple of restaurants, including one in Chicago, but unfortunately they all closed down. The rebirth comes as Tras/Horizonte, where you can find the tacos that gave Oso his fame as well as many new items, including a beef-rib burger for $10 with burnt gouda cheese, Oaxacan mole, and specialty prickly pear named xoconostle. It’s a very experimental ½-pound burger that is sweet, chocolatey, salty, savory, and meaty. The experiment worked with me.

“If you are craving In-N-Out and don’t want to leave Tijuana, just go to Yo Mommaz.” That’s my brother with the burger tip. The small joint is located in Colonia Altamira next to La Casa de la Cultura, Tijuana’s historic art house. The menu is the same as In-N-Out with the addition of an L.A.-style chili burger and four varieties of fries. No milkshakes. The owner served me his version of the Double Double animal style, which was almost an exact replica but slightly bigger, meatier, and with a peppery kick to it. 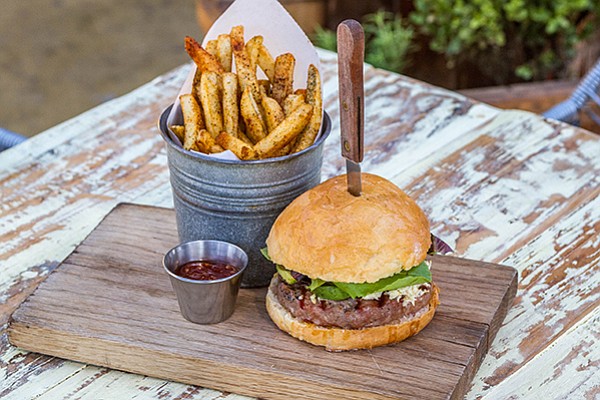 La Justina. The meat (cooked to medium) was pinkish and juicy, the Oaxacan cheese gave it a salty touch.

La Justina was one of the pioneers that helped the famed Avenida Revolución to go from endless curio shops and seedy bars to the trendy affluent establishments selling craft beer, cocktails, and modern Baja-Med cuisine. The house burgers (for $11) come inside brioche buns that are buttery, rich, and fluffy. The meat (cooked to medium) was pinkish and juicy, the Oaxacan cheese gave it a salty touch, and the jalapeño added a mild spice. It comes with fries that are covered with ashes from a mixture of herbs and a side of homestyle canned tomatoes with chile de arbol.

The popular food-truck park Teléfonica moved from their small open space to a large warehouse two blocks away. Outside are the original food trucks in a nifty area with a playground. Inside is a new brewery with a large bar, gigantic chairs, tables, and hammocks. Butchers & Buns joined the new location, replacing Maquina 65, the original burger truck. Their “Big Burger Cali Style” for $9 is ⅓ pound of chunky ground ribeye and a thick slice of sharp cheddar topped with caramelized onions and a house dressing — a creamy concoction of ketchup, mustard, mayo, and chopped pickles.