Burgers for those with exquisite taste 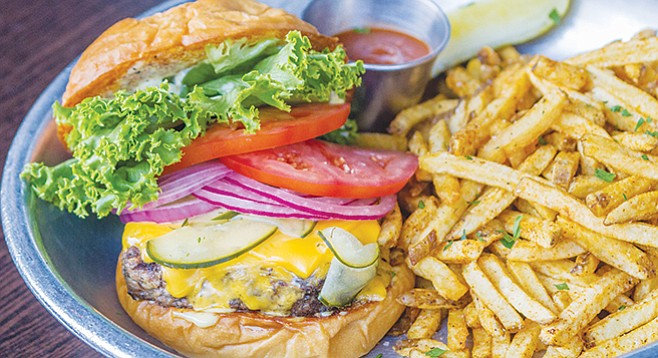 I like my burgers like I like my beer — made with purpose using quality ingredients so it’s obvious to everyone I possess exquisite taste. So don’t be surprised that all of my picks are chef-driven burgers found at places offering terrific beer lists. Well, most of them. The same way swill beer sometimes finds its way into my fridge, I sometimes slip and eat a burger I know I shouldn’t.

When Consortium Holdings hired chef Ted Smith to cook for its newly refurbished flagship Craft and Commerce, he was reminded the restaurant group sets a high bar for its burgers. Smith responded by raising the bar higher. The $13 C&C Burger tops grass-fed beef with tender onion confit and white cheddar blended with pepper jack (to balance sharp flavor with a superior melt). That’s served on light Bread & Cie brioche and toasted with garlic butter. The final touch is a Russian dressing–inspired “secret sauce,” revealed to include tomato, mayo, horseradish, chives, Worcestershire, and a touch of espelette pepper. My new favorite.

Variety makes for difficult ordering decisions on Barleymash's menu, but all start with a special grind sourced from century-old San Diego purveyor Central Meat & Provision, which culls the unused tips of ribeye, filet mignon, and New York steaks. Chef Kevin Templeton seasons the patties with a light chili rub and serves them on his own baked-in-house brioche recipe, inspired by Hawaiian sweet bread. A range of from-scratch sauces top these award-winning burgers, from the ale aioli on the $14.50 All American, to the truffle aioli paired with Maine lobster meat on the uber-decadent $19.50 Surf ’n’ Turf.

Jacob Bartlett and chef Eric Gallerstein launched Mastiff as a food truck making sausages from scratch. But upon joining forces with North Park Beer Co. last year, they gained their own kitchen inside the brewery — and the $12 burgers coming out of it are outstanding. They start with ground Angus chuck on butter-toasted Bread & Cie brioche, then get busy stacking flavors: skinless tomatoes roasted with garlic and thyme; a tangy spread of cornichons, capers, and red onions; and a melt of extra sharp Tillamook white cheddar. If somehow that’s not rich enough for you, they’ll add a slice of seared foie gras for another $12.

Sitting atop a Shelter Island fishing pier, Dennis Borlek’s Fathom Bistro also specializes in sausages. They’re served on Amoroso rolls, most famously used with authentic Philly cheesesteaks. So, rather than stock dedicated hamburger buns, the tackle shop and bistro simply halves an Amoroso and serves the burger on that. For $7, that deceptively basic Fathom Burger starts on a grill, sears with bacon fat and mustard, then develops a crispy char on a flat top. It’s dressed with standard toppings and choice of cheese, then steamed before being served. Those squeeze bottles of ketchup and mustard are for the burger; Fathom doesn’t offer fries.

Notorious Burgers first caught my attention when it announced it would only be serving independent breweries on its 24 taps, which already focused heavily on local beer. Better yet, the menu offers pairing suggestions for each of its ten burgers. Beef-wise, chef/owner Brian Gruber has opted for a blend of chuck, short rib, and brisket for burgers starting at $11.50. Toppings vary from locally sourced eggs and produce to cave-aged cheddar, soy glazed ribeye, and brie. Served on brioche from O’Brien’s Boulangerie in Escondido, these burgers often include Notorious sauce, which Gruber describes as an Asian-inspired Thousand Island, with hints of five-spice and ginger.

This neighborhood burger joint’s local beer list is also a winner, filled out with local mead, cider, and wine. The locavore approach applies to Burger Bench's burger toppings as well. Angus beef patties are served on brioche buns from O’Brien’s two miles away. Escondido farms provide eggs and mushrooms, while the tomatoes are grown in Oceanside and the avocados in Valley Center. Seasonal produce might hail from the farmers’ market held across the street every Tuesday. The crowd filling the place is local, too. The $7.50 Classic features American cheese and Bench Sauce, a house-made take on Thousand Island that fans of In-N-Out are going to love.

Sometimes I go against my gut, and proof positive is my inexplicable fondness for Original Tommy’s. I developed a taste for the L.A. burger chain while living in Hollywood, mostly in the minutes following last call. What kind of buns do they use? Not good ones. What kind of beef? I don’t wanna know. The great trick to Tommy’s under-$3 burgers is they’re smothered in some semblance of low-viscosity chili. No, its drive-thru doesn’t serve beer, but in keeping with tradition, I grab a couple burgers after drinking at nearby breweries. They’re terrible, but also a greasy kind of great.