Add this less-touristed (for now) island to your Southeast Asia list. 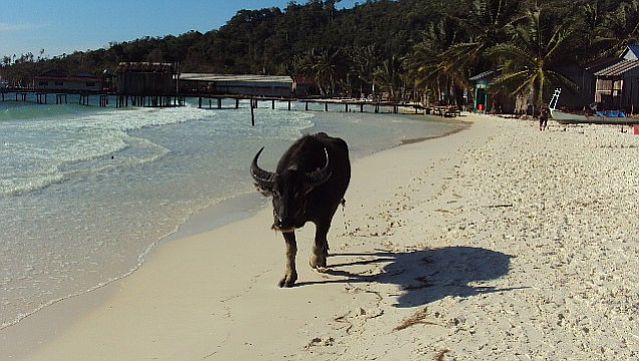 Editor's note: this article was originally written in 2013, after the author returned from a trip to Asia.

As Cambodia continues its surge in developing mass tourism, there are several places where the change will be explosive. Sihanoukville has the potential to morph into a Samui-like settlement, while the nearby island of Koh Rong could become the second coming of Ko Phi Phi.

Sihanoukville's metamorphosis is already in progress, with scores of farang-owned businesses and high-end hotels going up left and right. Koh Rong's will take longer, being two hours away by boat, but an airport is in the planning stages and that will change the island profoundly. As of now, there are just a handful of lodges: Paradise, Tree House and Monkey Island on the north shore, and the Samul guesthouse isolated on the south. 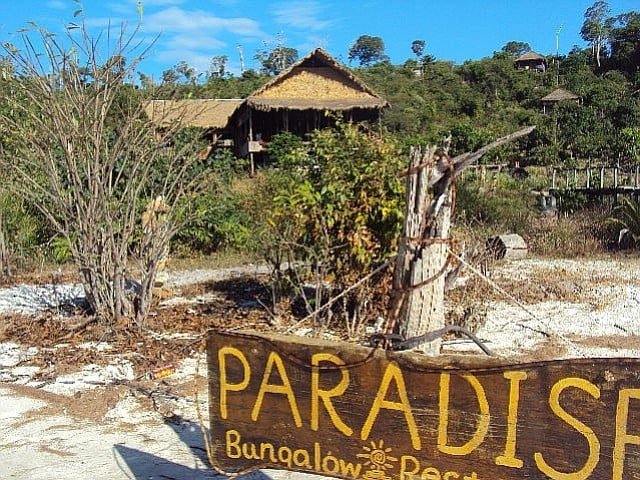 Paradise Bungalows's entrance from the beach.

Koh Rong: where to stay

Paradise was the first, built in 2009 by Rudy, a very personable European host who has built 18 or so bungalows a couple of hundred meters from the main village where the boats arrive. The accommodations are simple but well built, and his large dining and welcoming structure is simply stupendous, with cushioned seating for forty, and Rudy providing the musical soundtrack. His tastes run from classical to Frank Zappa, the food and drinks are terrific, and many guests spend hours lounging here.

A quarter mile away, just around the point, lies Tree House, featuring a half dozen three-story-high bungalows sitting on a pristine golden sand beach. The beach change from white sand to golden here is quite dramatic, and several lower bungalows are situated behind these in the jungle. A fine little reef, loaded with various varieties of coral, fish, and giant clams, is just 30 meters off shore.

The largest development on the isle belongs to Monkey Island, run by the same guy that operates Monkey Republic in Sihanoukville, a very friendly Aussie named Paddy. His 20 bungalows are the closest to the village and boat dock, and his large tent serves as the busiest drinking and eating place on the island. The menu is very extensive, drinks are well made, and this guest house followed Rudy's by a few months.

There are some a few smaller guesthouses in the village, along with a handful of dining choices, but it seems most guests don't spend the money away from the place they're staying at. In the middle of the village a well-trodden trail winds through shacks up the hill to the top of the island, a few hundred vertical feet up. Here the trail drops off onto a series of shelves and ledges amongst large boulders, and proper footwear is very advantageous. A rope has been strung along some of the sportier sections to aid in the descent, but almost anybody in decent shape can handle this with no problem. There are intrepid types who can complete the hike in flip flops, but the possibility of an injury or footwear failure is much higher, and there are blown out sandals all over this stretch. The entire hike from one side to the other can be completed in 45 minutes at a steady pace, and half an hour by athletes in a hurry. 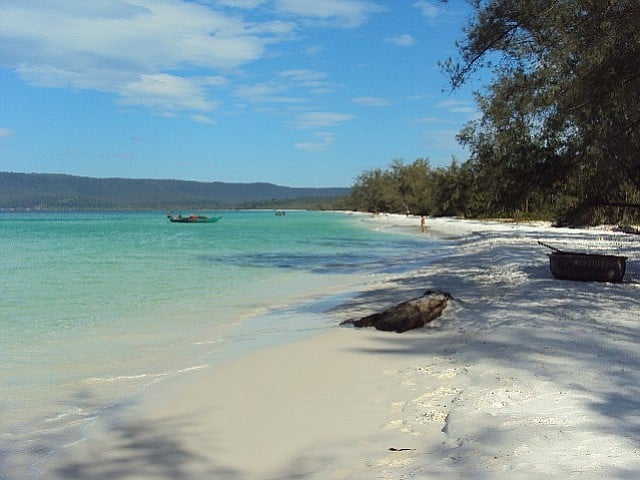 The boulder descent is a fun, challenging section, and the reward at the bottom is arrival at rustic and very isolated Long Beach. This is the finest beach on the island, with crystal blue water and white sugar sand that squeaks as you walk. A tiny fishing village lies around four miles away, and this is the place to get away from the crowds — at least for now.

Most of the rest of the island is undeveloped and uninhabited, and there is lots of room for growth, whether that's good, bad, or horrible. As more people discover the charms and allure of Cambodia, mass tourism will find Koh Rong, and options and prices will surely increase.