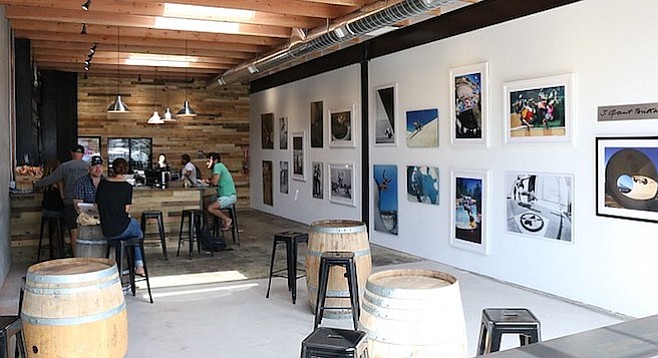 The growing trend among beer companies to open satellite taprooms in commercial districts is bringing a craft-brewery presence to neighborhoods that didn't previously haven't one. There were 20 off-site tasting rooms at the beginning of 2017; by the end of the year at least 10 new ones will have opened. These four neighborhoods in particular will be added to San Diego's craft beer company map:

Kensington It seemed a matter of when, not if, Kensington Brewing Company would establish a location in its namesake neighborhood. It's already built out a tasting room in one of the two suites that formerly housed Kensington Video (4067 Adams Avenue), and its opening is imminent — pending ABC approval. The kid-friendly space covers 1350 square feet with plenty of seating and historical photos of Kensington and surrounding neighborhoods. With 20 taps and 4 nitro handles, Kensington plans to include a few soft drinks in addition to beer and down the road hopes to introduce snack food on premises, with an eye on introducing a few guest beers.

Bay Park Also aiming for a November opening to coincide with San Diego Beer Week is Benchmark Brewing Company. The Grantville brewery has secured a 1000-square-foot space in Bay Park (4112 Napier Street), which will also feature a partially covered, 1700-square-foot beer garden, with fire pit. Yes, Bay Park is technically already home to Coronado Brewing Company's large production brewery, but that sits in the industrial southern tip of the neighborhood. Benchmark's new 12-handle location will reside in its commercial center, not far from gourmet market Siesel's Meats. "We wanted to be someplace where we'd be adding to the neighborhood," says Benchmark cofounder Rachael Akin, adding that Bay Park "was missing a space you could take your dog and a stroller in for a beer."

Encinitas Already open, as of early August, Culture Brewing Co. established the first beer company presence in downtown Encinitas (629 South Coast Highway 101). The 1000-square-foot tasting room keeps up the company's beach-neighborhood focus with a dog- and family-friendly space that hangs locally produced artwork on its walls. Twenty taps pour beer by the glass, crowler, and growler, all supported by the company's Solana Beach brewing location. Encinitas hasn't proven the most receptive community when it comes to breweries — it took well over a year and a showing of support from local residents for culture to get approved by the city. However, Modern Times recently received a go-ahead to open a tasting room there by 2018.