La Jolla movie restaurant tries to get it right, but...

A Lot to be improved 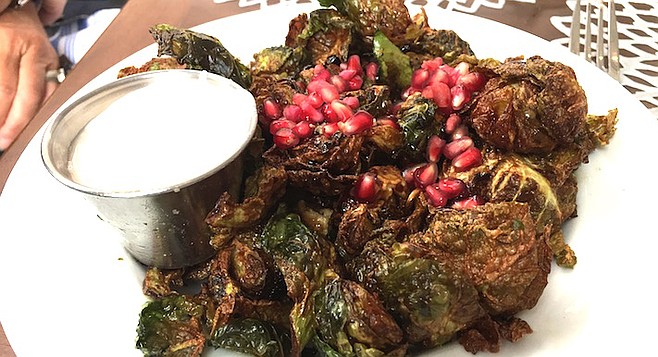 Just as traveling through a snow storm reminds me to appreciate our Southern California sunshine, I’d like to thank The Lot in La Jolla for reminding me to appreciate the times I have dined out and received benign service. Before continuing in this vein, let me just say that the outdoor dining space is a mix of chic and comfortable, and the food is excellent, albeit at La Jolla prices. I particularly liked the Fried Brussels Sprouts ($16), which were covered in fresh pomegranate seeds and served beside a heaping portion of tangy and spicy yogurt.

From what I’ve seen and what I sampled, the food and decor are top-notch, no nitpicking to be done. It’s the service that leaves something to be desired. Correction: the service inside the theater is solid — fast, friendly, accurate. It’s safe to assume that most people dining at the Lot are out for dinner and a movie. So it boggled my mind that it took 15 minutes of sitting at the table before someone appeared to take our order. 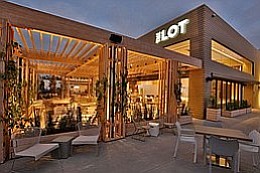 There was a synchronized twinge on everyone else's face.

There were four of us at the table, and upon placing our order, we asked for two checks. “I think I can do that,” our server said.

David and I went ahead and placed our order: a bottle of sparkling rosé and a few appetizers. There was a hitch — one item I wanted, which was printed on my menu, was not on our server’s menu, as he pointed out. He disappeared for a bit before returning to confirm that my menu was wrong, and I’d have to select something else. At this point, I’m thinking, No big deal, stuff happens, I’m just glad to get my order in.

In the next five minutes, our dining companions receive their drinks. Ten minutes after that, I managed to flag down our server and inquire after our bottle of rosé. “Oh, it was warm, it’s being chilled,” he said.

“That would have been nice to know when I ordered, I would have gotten something else, now I’m not sure we have the time before our movie to relax with a bottle,” I said. He asked if I still wanted it, and I said, “Only if you can bring it now.” Our food was out before the bottle. Once our glasses were filled, the man set it in a bucket of ice placed beside the table, just behind and between me and David.

There was a problem with our friend's dish — her salad was missing the steak she’d ordered. When she pointed this out, our server looked confused, then retrieved his notes, and said, “Oh yeah, my bad, you ordered it, I forgot to put it in, my bad.” It sounded like an apology to me, but something in his tone rubbed David the wrong way. He later told me the guy sounded overly flippant about it.

When the steak arrived, most of the salad was gone, but our friend said it was so perfect she didn’t mind eating it as-is. I had a bite of the juicy, well-seasoned meat, which was cooked to an exact medium. Just when we were ready to forgive all the snafus thus far, our server walked by with a used glass he’d grabbed from an abandoned table and casually dumped the remaining ice and liquid from that glass into our ice bucket, which housed our not-yet-finished bottle of rosé. Because it was just behind me, I didn't see this happen, but the synchronized twinge on everyone else's face was soon explained to me.

The final insult was the $12 “event charge” on our friends’ bill. After they asked about it, our server said that was for the steak. The steak he had said would be taken care of when he’d delivered it after he failed to include it on his ticket for the kitchen. When this was pointed out to him, he played dumb. “Oh, did I say that? Well, okay then, let me go take it off.” Dude.

That's quite a "LOT" that went wrong, esp. with those prices. I hope you complained to the manager.