Always use a hot bait 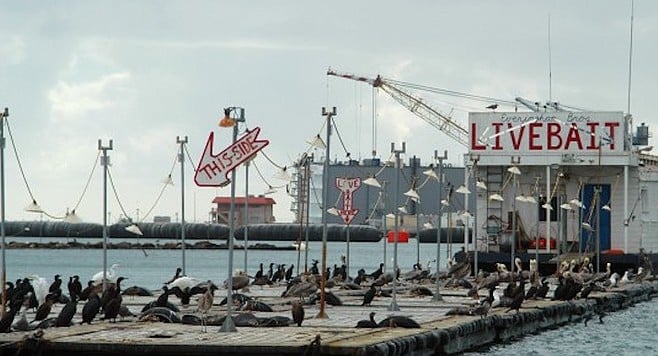 Saltwater: Though a couple hundred more anglers got out this past week than the week previous, the tuna counts dropped across the board; bluefin numbers dropped by half, while yellowfin and skipjack slid about 10% or so. On the plus side, dorado and yellowtail numbers went up dramatically, as both species surged in the counts about 300% and 400%, respectively. The calico bass count plummeted from 811 to 64 as many of the local half day boats moved away from the kelp to take advantage of the yellowtail and bonito fishing offshore.

Bonito are still chewing hard and at times are beating the yellows to the bait or lure as the bite develops on a stop. One way to fish through the bonito and get more yellowtail strikes (to an extent, as bonito are fast and voracious) is throwing larger surface irons or even trying the yoyo with a Salas 6X-type lure, or even dead-stick with a flat-fall jig one-half to three-quarters down into the water column. As yellowtail will hang out or down a little further from the boat while bonito are not as boat-shy, getting a bait or lure to the outside of the chum line or boil will help increase the number of yellowtail caught.

If fly-lining bait, choosing a hot bait is imperative. It’s a bit like avoiding birds in that respect; a dead or sluggish bait flopping or circling on the surface will draw mackerel, bonito and seagulls while a speedy bait, heading down and away from the boat and the birds, will have greater odds of enticing a ’better’ gamefish to bite.

As the deckhand keeps a few baits in each well while the bite is on, sometimes anglers get frustrated. But there is a reason for this; as the anglers thrash about trying to get a bait, other baits in the well get scales knocked off and noses bloodied while they thrash about trying to escape both the angler’s hands and the baitwell itself. The bait stays much healthier in the main bait tank, so only just enough is divvied into the individual wells while the bite is on.

With sardines, the most common bait used, the hot bait is easy to spot in the baitwell. If a bait is easy to handle, it’s probably not the one you want. Wait for the sardine that is hard to corner; one with no scales missing, no bloody nose and preferably (in my opinion) a light green and a bit larger than the average size. That, or if you spy a few 7- to 12-inch mackerel in the main tank, tie on a proper size hook and ask the deckhand for a mackerel.

With either mackerel or sardine, hooking the bait correctly is as important as finding a good one in the well. Both have a cartilage cavity in front of their eyes. A properly-sized hook (usually 2/0 for sardine and 4/0 for mackerel) should be carefully pushed sideways through the forward part of the cavity. There, the hook will not impede the bait, nor will it cause bleeding or a mortal wound. No, just cast the bait lightly so that it will wind up in the opposite direction of the drift and not under the boat. Allow it to swim, but keep up with it; do not just peel line and give it slack, rather, allow the bait to take the line off the spool out of gear with your thumb resting lightly on the edge of it at the ready for a strike. For those using spinning reels, try a bait-runner type set to its lightest setting or guiding the line with your hand so as not to allow ‘loops’ in the line.

Oct 26 – Continuing their hot trend, the San Diego called in with 275 yellowfin tuna and 28 dorado for the 55 anglers aboard their ¾ day trip. The Dolphin ½ day run with 15 anglers returned to the dock with 40 yellowtail and 75 bonito in the gunnysacks.

Oct 25 – Limits of 160 yellowfin tuna and 64 dorado were caught by the 16 anglers aboard the Pacific Star during their 2.5 day trip.

Oct 24 – 9 hoop-netters aboard the Jig Strike ½ day run raised 76 spiny lobster, with 25 kept and 51 released. The Mission Belle called in with limits of 34 bluefin tuna along with 35 bonito, 12 yellowtail and 5 rockfish caught by 17 anglers during their ¾ day trip.